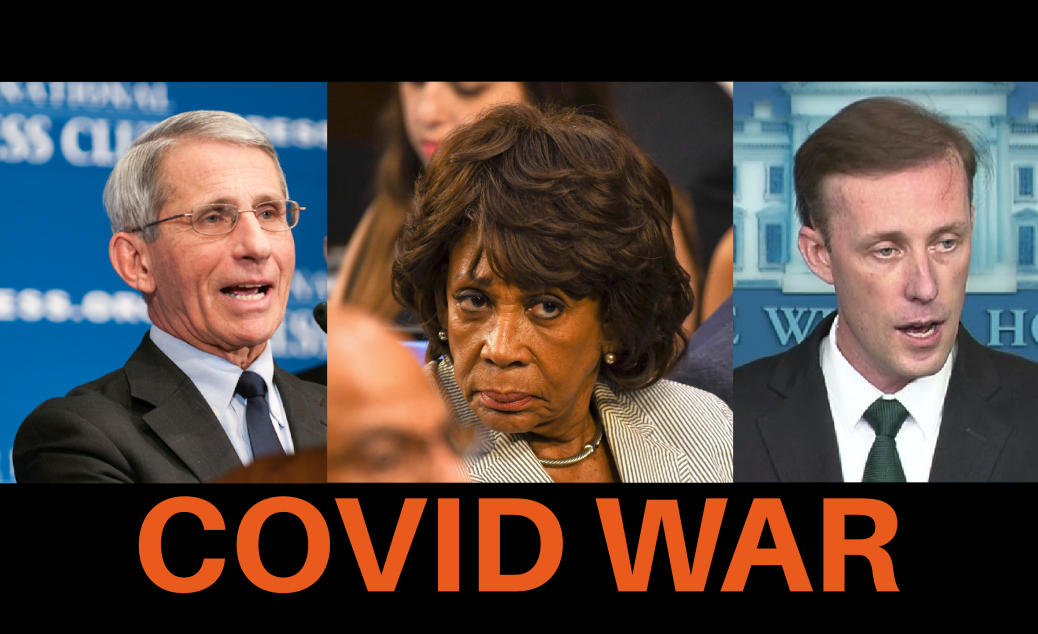 Last Wednesday it was announced that America’s Chief COVID War champion, Dr. Anthony Fauci, tested positive for the virus and was experiencing mild symptoms. This, despite Fauci getting two shots of the Operation Warp Speed therapy jab and double boosted.

There was a time that breakthrough infections made national news, but it has become commonplace. The paper pointed out that the same week Fauci announced his diagnosis, Xavier Becerra, the fully vaccinated secretary of health and human services, tested positive for the second time in under a month, and Rep. Maxine Waters also announced an infection. (See “FULLY-VAXXED, FULL OF COVID, FULL OF CRAP,” “GET VAXXED, GET COVID: THE ONES THAT GOT IT BRAGGED THEY GOT THE JAB” and “NEW ZEALAND’S FULLY-VAXXED PM JOINS LONG LIST OF VAX ADDICTS TO COME DOWN WITH VIRUS.”)

Jake Sullivan, the White House national security adviser, joined the long list of names of the COVID Jab Club in the Biden White House who was fully vaccinated and came down with COVID-19.

A senior administration official told the Associated Press that Sullivan was in contact with President Joe Biden early last week. The president has not tested positive. Sullivan was reportedly in touch with a few individuals who came down with the virus and has been keeping his distance from the president.

Sullivan met with Aïssata Tall Sall, the foreign minister of Senegal at the White House on Friday to discuss the Ukraine War and possible food shortages and he met with Chinese Communist Party Foreign Affairs Chief Yang Jiechi in Europe on Monday for four hours.

Studies have shown that the Omicron variant has been effective in evading the current batch of vaccines. Those who come down with these infections and recover show a poor boost to the immune system to prevent future infection.

“In those who were triple vaccinated and had no prior SARS-CoV-2 infection, Omicron infection provided an immune boost against previous variants (Alpha, Beta, Gamma, Delta and the original ancestral strain), but less so against Omicron itself,” Imperial College of London wrote. “Those infected during the first wave of the pandemic and then again later with Omicron lacked any boosting.”

Professor Danny Altmann, from Imperial’s Department of Immunology and Inflammation, said: “We have found that Omicron is far from a benign natural booster of vaccine immunity, as we might have thought, but it is an especially stealthy immune evader.

Not only can it break through vaccine defenses, it looks to leave very few of the hallmarks we’d expect on the immune system—it’s more stealthy than previous variants and flies under the radar, so the immune system is unable to remember it.”

About 300 people in the United States are dying from COVID a day and the average number of new infections each day has been over 100,000 since the end of May. About 66.8 percent of Americans are vaccinated. Nearly 86 million in the U.S. have been infected with the virus and over one million have died.

Fauci recently said the U.S. is 'out of the pandemic phase' of the outbreak.

"The United States and the entire world is still experiencing a pandemic, but there are different phases of the pandemic. And what we are in right now is somewhat of a transitional phase, out of the accelerated component into hopefully a more controlled component," he said.

TRENDPOST: Days after Fauci announced his infection, Dr. Rochelle P. Walensky, the head of the Centers for Disease Control and Prevention, recommended that children 6 months through 5 years of age take the Pfizer COVID-19 jab.

"This expands eligibility for vaccination to nearly 20 million additional children and means that all Americans ages 6 months and older are now eligible for vaccination," a statement said.

The New York Times reported that over two million children ages 6 months to 4 years had been infected with the virus. Of those, 20,000 were hospitalized and 200 had died from the virus, which is a death rate of 0.01 percent.

TRENDSPOST: We reported in our 9 November 2021 Trends Journal that the global COVID-19 war is entering its next phase and drug makers were adapting.

Both Pfizer and Merck announced antiviral drugs to improve survivability for patients. Pfizer—already the lead seller of the COVID Jab—has contracts to supply other countries and expects Paxlovid to add $5 billion to its yearly sales; its stock rose 11 percent on news of the new pill, whereas Merck's stock price fell; see "DRUG COMPANIES CASHING IN ON COVID" (11 May 2021); “MORE COVID JABS, MORE BIG BUCKS FOR DRUG LORDS” (21 Sep 2021).

TRENDPOST: Why believe Pfizer? As we have reported in Trends Journals, their “miracle vaccines,” are a fraction of the 96 percent efficacy which was sold to the public when they were launched last December.