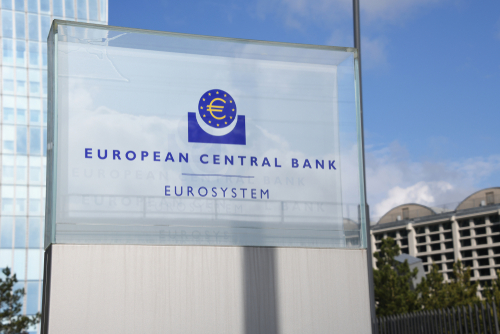 Interest rates in the 19-nation Eurozone are surging as the European Central Bank (ECB) is halting its multi-year bond-buying program in advance of raising interest rates for the first time in eight years.

On 4 May, the yield on Germany’s 10-year government bond—a benchmark for Eurozone rates—topped 1 percent for the first time since 2015.

Borrowing costs also are rising for riskier, heavily-indebted European nations such as Italy and Spain, the Financial Times reported.

The spread between yields on Germany’s and Italy’s bonds—seen as a measure of risk in the region—grew by as much as 1.9 points last week, the most since the early days of the COVID War when investors dumped risky assets and fled to safer ones.

Italy’s debt load is now close to 160 percent of GDP after the country borrowed heavily to carry its tourist-centric economy through the worst of the COVID era.

The “danger zone” for the Germany-Italy spread is anything above 2.5 points, according to strategist Frederik Ducrozet at Pictet Wealth Management.

However, “the pain threshold might be higher today, up to [3 points] because the prospects for nominal GDP growth are higher,” he said.

Also, the threshold might have risen because investors have been lulled by Italy’s relative stability since former ECB president Mario Draghi became prime minister last year.

Elections are due next year and Draghi could be turned out, reviving fears for Italy’s continued consistency.

In addition, Italy’s economy shrank 0.2 percent in the first quarter, compared to 2021’s last three months, and has been hit harder by fallout from the Ukraine war, Western sanctions on Russia, and China’s anti-COVID lockdowns, Ludovic Subran, chief economist at Allianz SE, told the Financial Times.

Markets are “pricing in” the assumption that the ECB will intervene to cap the spreads among countries to ensure that debt-laden member nations do not face runaway borrowing costs that spark a recession.

The central bank has said it will be flexible in how it invests the proceeds of the bonds that will mature out of its portfolio.

Also, the ECB has teased the prospect of a “new instrument” that could ease borrowing costs for countries at special risk as interest rates rise.

However, the bank’s governing council “has not discussed in detail” any such instrument, ECB vice-president Luis de Guindos said in a statement quoted by the FT.

Still, because of concerns over differences in borrowing costs between member countries, the ECB is likely to shift policy slowly and not hike rates by the 0.9 points that markets are now pricing in, Robin Brooks, chief economist at the Institute for International Finance, told the FT.

“How do you do it when you have these debt overhangs?” he wondered. “If they continue on this tightening path, I think you will see Italian spreads widen further, perhaps in a disorderly way.”

TRENDPOST: It is a sick joke that with euro inflation at 7.5 percent the ECB, which has long said it would raise interest rates when inflation moved above their 2 percent target range, still has them in negative territory.

They have kept them this low to artificially prop up the failing Euro markets.

In fact, last October, ECB head Christine Lagarde stated that the ECB would not budge rates from their current -0.50 in 2022, as we reported in “Will ECB Hold to Negative Interest Rate?” (2 Nov 2021).

At her 3 February press conference this year, Lagarde announced the bank would hold rates steady for now.

Borrowing costs are rising months before the ECB is likely to raise interest rates. This signals the broad lack of confidence that investors have in the region’s economy, both now and in the future, as well as a lack of faith in the ECB either to reduce inflation or keep the economy out of a recession.

As we have pointed out in “French and German Factory Output Sags in March” in this issue, the continent already is in a cycle of Dragflation: prices are steadily rising, economic activity is slipping, and households are caught between the two as their incomes buy less and less.