THOUSANDS TAKE TO THE STREETS IN STOCKHOLM: “NO TO VACCINE PASSES, YES TO FREEDOM” 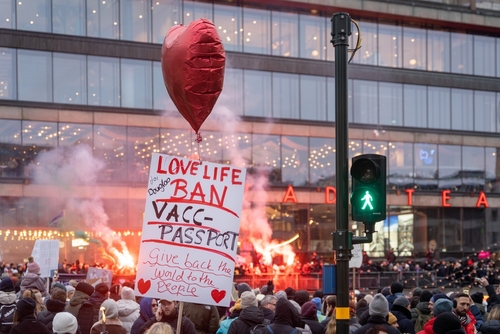 The Swedish Security Services, or Sapo, said about 9,000 demonstrators held rallies in Stockholm against vaccine passes.

These protesters chanted, “No to vaccine passes, yes to freedom.”

Julia Johansson, 30, told the Agence France-Presse (AFP) that these vaccine passes are discriminatory and “we have to be able to decide ourselves what we want to do with our own bodies.”

Sweden has seen a record number of cases in recent days, including 39,928 cases on Thursday alone—despite 83 percent of the population over the age of 12 being fully vaccinated.

The country of 10.35 million recorded 15,639 deaths. The AFP reported that the country introduced the vaccine passes on 1 December and they became mandatory on 12 January. These passes are needed to enter indoor events where there are more than 50 people.

There was another protest in Gothenburg, the country’s second-largest city with about 1,500 demonstrators.

TREND FORECAST: As we have forecast, the “Freedom” chants are key elements of new anti-vax, anti-establishment, anti-immigration socio/political movements that will sweep across much of the world.

And, the faster economies decline the faster these movements will rise.

What will reverse this trend is when nations ratchet up war talk to divert the unconscious masses away from the COVID War—and their loss of freedom and livelihoods—to a military war with “terrorists” and “enemies” that the “herd” will eagerly support with blood and money.

As Gerald Celente continues to note—and as Anthony Freda illustrates on the cover of this week’s Trends Journal—“When all else fails, they take you to war.”

And the war drums are beating louder. Beyond Ukraine and China that are in the headlines, we are very much focused on the current events forming future trends in the Middle East, which to us is a greater and more deadly hotspot.