THOUSANDS MARCH IN D.C. IN OPPOSITION TO VACCINE MANDATES 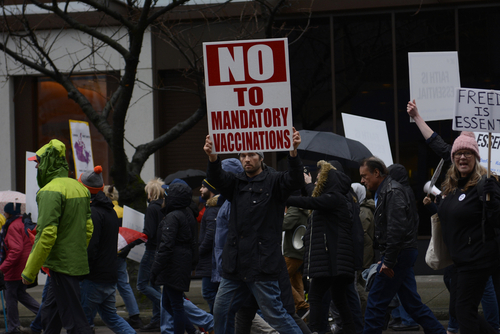 Thousands of protesters gathered in Washington, D.C. on Sunday to voice their opposition to COVID-19 mandates, in what Jeff Bezos’ Washington Post called a “jarring spectacle,” given that there have been so many new cases in the U.S.

The organizers of the protests made it clear that they were demonstrating against vaccine mandates and not the vaccine option.

“Since the vaccines do not stop people from getting sick, why should we impose them as a requirement to keep one’s job or to enjoy the freedoms that we have always enjoyed such as eating at a restaurant, going to a concert, or attending school or the university?” said Louisa Clary, an organizer, in an email obtained by The Wall Street Journal.

The protesters marched from the Washington Monument to the Lincoln Memorial. One protester held a sign that read, “I Am Not a Lab Rat.”

“Some were white-haired; others were being pushed in strollers. Most were White and many wore gear with slogans supporting former president Donald Trump. A group of men in front of a cart with a Don’t Tread on Me flag started chants of “Let’s go Brandon” and “F--- Joe Biden” to cheers.”

TREND FORECAST: Compared to the anti-vax, pro-freedom protests taking place in Europe, in which nations such as France, with a population of 67 million, had 100,000 taking to the streets, in America, of a nation of 330,000,000 only 20,000 showed up in Washington on Sunday. Thus, it symbolizes the sagging American spirit.

As we have forecast before the march took place, it would prove nothing and do nothing: Politicians continue to do what they want, and it barely made news since the protest was basically an isolated event that received very little news coverage.

We continue to note that for protests to be successful, they must be ongoing and disruptive in a peaceful manner. Without a new anti-establishment populist movement, the current political parties will continue to control the masses and impose dictates and mandates as they wish.

TREND FORECAST. Rather than slow down the COVID War and its draconian mandates, the Washington protests sped it up in some states.

Indeed, a day after the D.C. anti-vax movement, two state Senators in California introduced bills that require all K to 12 students to be fully jabbed or they cannot attend school, and those over 12 years of age do not need their parent’s consent to get the COVID Jab or any other vaccinations the schools are peddling.

Ignoring the facts and boosting his arrogance, Sen. Richard Pan, who introduced the “must-get-vaxxed-or-no-school bill”, said “We have an opportunity here to keep kids safe. As a pediatrician, parent and legislator, I am committed to giving the public confidence and certainty that we are working to prevent or slow down the next coronavirus surge.”

On the arrogance side, why vax children since they are not dying from the coronavirus or its variants?

Pan ignores the facts that according to the Centers for Disease Control and Prevention, less than 0.2 percent of Covid-19 deaths in the United States have been among children.

Since the COVID War broke out in January 2020 to 6 January 2022, the CDC reports the grand total of 694 children aged 17 or younger that died of COVID... out of a population of some 74 million. And 61 percent of those hospitalized were obese.

Absent from pediatrician Pan’s head is that there are 14.4 million obese children in the U.S., according to CDC estimates. Pan also ignores the facts that these strict mandates and rules are being imposed on school children who are not part of the small demographic dying from the virus.

Confirming what we have been reporting for nearly two years, the people that should be taken care of the most are the elderly and those suffering from pre-existing comorbidities.

Over 75 percent of COVID deaths have been among seniors, and over 25 percent, some 200,000, of those COVID deaths were people aged 85 and older. Yet there is never a mention, nor are there mandates being imposed, to address and assist those most vulnerable to COVID 19 and the variants.

Also totally absent in Pan’s dictate are the calls for natural healing...for people to build their immune systems to help fight off disease, infections, viruses, etc.

On the trend line, these COVID War mandates will in turn increase the amount of home-schooled children and accelerate the online learning trend, since there will be a significant number of parents who will not want their children jabbed with the Operation Warp Speed gene therapy jab.