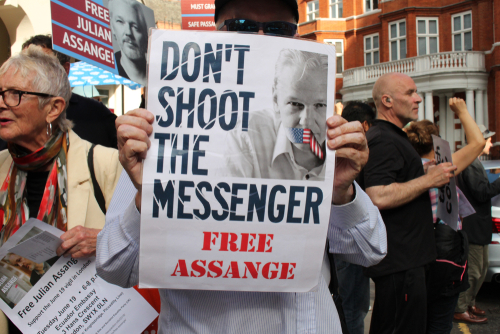 WILL AMERICANS PROTEST FOR JULIAN ASSANGE?

Americans who believe the U.S. Government and its public officials need to be surveilled, not free citizens, might want to make some noise for Julian Assange when he hits shores here to go on trial.

A British judge announced this past week that Assange would be extradited, to face charges stateside.

What are Assange’s crimes?

Naturally, much of that info was classified as super-duper top secret, not to protect intelligence assets, etc. (which Wikileaks is not accused of endangering), but to hide horrible decision-making and snafu’s from the American public.

As the RepublicWorld website has summed up nicely, WikiLeaks has released thousands of documents, and reams of digital data over its existence, including 400,000 secret military reports on the Iraq war and 90,000 papers about the Afghan War.

One of the most sensational releases occurred in 2010, when the organization released a 'Collateral Murder' video, which showed troops in a U.S. Apache helicopter murdering a dozen people on the ground in Iraq's Baghdad, including two journalists of an international news agency.

At that point, Assange was suddenly target by Swedish authorities for allegations of rape and sexual assault.

Assange eventually sought refuge in the Ecuadorian Embassy in London, and remained there for the next seven years. His attorneys claim they have evidence the CIA tried to poison him while there in 2012.

The U.S. meanwhile, brought Assange up on charges of espionage, related to Chelsea Manning, a US Army intelligence analyst who was convicted for stealing classified diplomatic cables and military files.

Manning’s 35 year sentence was commuted in 2017 by then President Barack Obama.

During the 2016 Presidential campaign, Wikileaks became part of another controversy, releasing thousands of emails from Hillary Clinton’s secret home email server, which she used to illegally hide official communications while she served as Secretary of State during the Obama administration.

Many of the communications were supposed to be subject to government security and preservation protocols.

Busy at the time overseeing the Russian collusion scam that would hobble Donald Trump’s presidency, enlisting the FBI and Federal Court system in a web of deceit and lies, Clinton hasn’t spent a day in confinement for those offenses.

In fact, her campaign weaved the “Russian hack” of her illicit server right into her other bogus Russia narratives. FBI director James Comey infamously vacillated just before the election about investigating and possibly proceeding with charges against Clinton.  He nixed the idea, right before voters went to the polls.

Clinton, meanwhile, remarked that she wished she could take out Assange via a guided missile assassination.

Now she and the Deep State will settle for a show trial and trying to put Assange away for 175 years or until he suicides himself, whichever comes first.

Assange, who is in poor health and mentally broken down by his travails, has no desire to rot in a U.S. jail, or be “Epsteined.”  His wife said this past week that he would take his own life before that happened.

It’s disheartening to consider that this saga is all portending another sorry step down in a fast sinking, once great country.

If Donald Trump had really wanted to jolt the swamp, he would’ve pardoned both Julian Assange and Edward Snowden. It didn’t happen.

One might think Americans of all political stripes could get behind a movement to free Assange, and make some noise. As Gerald Celente says, it’s time to unite for freedom, peace and justice.

THE CHINESE WAY: EVERY COMMENT TO BE GOV’T MONITORED

The law would establish monitoring of virtually every internet commenting system operating in the Communist country. The directive also outlaws anonymous comments.

The Biden Administration may well be studying the legislation for how to clamp down “the Chinese Way.”

“To innovate the management method of comments and comments, develop and use the information security management technology of comments and comments, and improve the ability to deal with illegal and bad information; timely discover the risks such as security defects and loopholes in the comment service, take remedial measures, and report to the Internet. letter department report.”

The Biden regime met blowback for rolling out a federal “Disinformation Governance Board” earlier this year.

Unfortunately, much of the controversy centered around the person chosen to head the board, rather than the concept itself.

The government has systematically sought to suppress Constitutional free speech rights of Americans using a double-speak rubric of “dangerous disinformation”, as the Trends Journal has chronicled in numerous, articles, such as:

The full proposed Chinese law can be read here.

BEAT THE ELITE: TRENDS IN PREPAREDNESS

Building a stockpile of cheap and relatively healthy “forever foods” just might help ruin the best laid plans of elitists like Klaus Schwaab and Bill Gates.

Larry and Hope Ware of YouTube’s Under the Meridian channel know a lot about frugal living. They recently compiled a “Top Ten” list of long-lasting shelf stable items no home should be without.

Their list is a good starting point, but we saw a few more items that deserve to be on any basic food preparedness list.  We’ll run those down, too.

For basic pantry preps, there are three storage musts to remember: keep it dark, cool and dry. The proper storage environment can extend the life of almost any food item.

According to the Wares, the top ten items are:

The Wares are vegan, so meat, fish, milk and egg based products didn’t make their list.

But some top cost-effective items in those categories include:

Other things that should be on the shortlist of “forever foods” include dried pasta, bulk dried corn kernels—otherwise known as unpopped popcorn—and white granulated sugar. And oats and wheat berries should be on the list of grains.

Popcorn kernels, properly stored, have a shelf-life comparable with dried beans.  The kernels can be popped, of course, for a healthy snack. But the kernels can also be ground for other uses.

Sugar, meanwhile, won’t make any lists as a particularly healthy food item.  But used in limited quantities with other ingredients, it can add needed calories in lean times.  It’s relatively cheap, and can store almost indefinitely in cool, dark dry conditions.

More on prepping can be found on Larry and Hopes’s excellent YT channel.