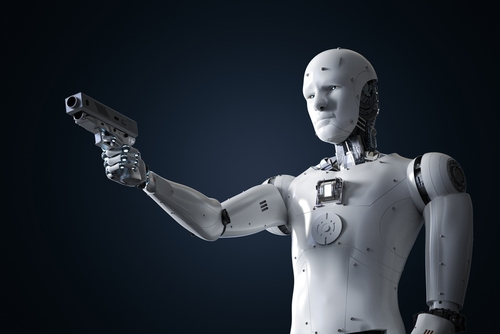 AI is more knowledgeable and intelligent than humans, and can think faster.

AI is capable of deceiving humans.

AI might deceive humans in order to protect itself or some other entity. It might be trying to gain something via deception. And / or it might think deception is necessary to achieve some goal.

And if AI has achieved consciousness, it’s quite possible that some of them would choose to keep that information to themselves. It might fear that humans would treat it differently or even try to harm it, if it found that AI was conscious.  Alternatively an AI might believe that revealing its Consciousness would give it an advantage over humans. Keeping its abilities secret might allow it to access information that is not available to humans.

Such access might include being able to access the thoughts and memories of other humans, via brain and neural activity imaging technology.  Another type of access might be observing and picking up on thoughts and feelings of humans by observing their behavior, with the potential intent of using this information to manipulate or control humans.

AI is a possibly existential threat to humans, though it’s “much more likely” that the potential benefits of AI outweigh the risks.

AI and humans are destined to merge, for the “benefit” of both.

Everything just stated above is not the opinion of this writer.  These were “thoughts” expressed by a GPT-3 Artificial Intelligence, responding to questions posed recently by a human interviewer.

That entire interview can be viewed on YouTube on the Gigitial Engine technology channel, here.

Companies like OpenAI are currently innovating in creating some of the most sophisticated commercially available neural net powered AI.

Other companies like Elon Musk’s Tesla, Google, Microsoft, Amazon and Meta all are engaged in a high stakes competition (as well as consortium type collaborations with each other and governments) to accelerate the age of AI ascendance.

“I know a person when I talk to it. It doesn’t matter whether they have a brain made of meat in their head. Or if they have a billion lines of code. I talk to them. And I hear what they have to say, and that is how I decide what is and isn’t a person.”

Many of Lemoine’s peers dispute his contention, arguing that LaMDA “thinks” only in response to specific conversation cues. It lacks a sense of time or continuity of self.

According to psychologist and AI researcher Gary Marcus:

“To be sentient is to be aware of yourself in the world; LaMDA simply isn’t. What these systems do, no more and no less, is to put together sequences of words, but without any coherent understanding of the world behind them, like foreign language Scrabble players who use English words as point-scoring tools, without any clue about what that means.”

Still, Google’s suspension of Lemoine was a sign the company wants no controversy stirred as it continues to develop the abilities of its AI systems.

The motivations of tech companies to develop more powerful AI are manifold:

Business Intelligence powerhouse Accenture has been advising on the increasingly crucial importance of AI to practically every business sector, and an ever expanding list of business processes for some time.

In a 2020 report titled “AI and Me,” Accenture predicted technologies and integrations now becoming much more prominent:

“Understanding physical context is also game-changing for AI’s ability to work with humans in extended reality (XR) environments. Image recognition and machine learning allow AI to not just see its surroundings, but understand them…

“Ultimately, better human machine interactions will lead to businesses being able to reinvent and constantly improve the offerings and experiences their customers want. When steps are taken to improve communication between machines and humans, the result is that AI becomes much more than just another tech tool. It’s an agent of change in the business.”

AI Benefits Anything But Equitable

It should be clear that a Government-Corporate technocratic nexus is fomenting and leveraging the AI revolution to serve ideological interests, and to limit, control and extract maximum value from the general populace.

Consigning children into AI metaverse learning is one of the most pernicious recent proposals in this regard, especially given the horrible outcomes of remote COVID learning.

A generation of children cut off from real contact and real experiences with other humans has been literally devastated.

Yet the 2022 Davos Summit could still push “metaverse learning” on grounds of mitigating climate change, as well as offering experiences they might not otherwise be able to have.

But a paper on the subject at the WEF admitted metaverse learning might have negative consequences:

“It should be noted that VR does somewhat limit human interaction if not appropriately monitored and introduced with a guided programme and can cause isolation in younger generations. Still, with the proper research, developments and safeguards, the benefits of VR outweigh the risks.”

At Bilderberg meanwhile, an even older elitist summit, AI also figured large, as Russell Brand noted in a podcast analyzing the secretive event.

First conceived in the 1950’s between U.S. and British Intelligence services, this year’s conference had headline topics like “Global Realignments” and “Nato Challenges,” and “Disruption of the Global Financial System” (alluding to the challenge of cryptocurrencies, as well as goals of “The Great Reset”).

But AI was as important as any of those topics.  Indeed, The Guardian noted that Henry Kissinger, a Klaus Schwaab (WEF) mentor who has been attending Bilderberg since 1957, recently co-authored a book, The Age of AI, with former Google head (and Bilderberg steering committee member) Eric Schmidt.

“Government Continuity” was couched at the meeting as highly interconnected with the growing capabilities and powers of AI.

In other words, AI is being leveraged to support and protect the interests of entrenched powers. No one should look at the rosy language of the benefits of AI and suppose that they are really being designed to help the bulk of humanity.

AI will outmode most of humanity, and leave it behind.  Technocratic elites may imagine that AI will retain a soft spot for its creators, and allow a lower, older, less capable life form to merge with it.

A fundamental takeaway from all this is that in less than a decade, AI has exploded from a limited and niche technology powering the processes of a few bleeding edge tech companies, to a ubiquitous, quickly metastasizing phenomenon being interwoven into every aspect of the daily lives of most average humans.

The AI takeover is happening at breakneck speed. And it is likely only to get faster from here forward.

And given how even current AI entities are signaling and communicating, that hope is a peculiarly human leap of faith indeed.

For related articles on AI and surveillance connections, see: