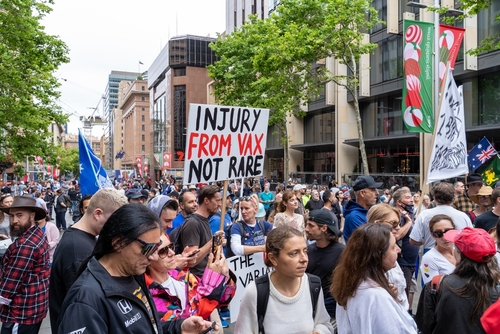 ACOUSTIC WEAPON COMING TO A PROTEST NEAR YOU? “Conspiracy” speculation that Australian police were using a Long Range Acoustic Device (LRAD) to disrupt protesters turned into a confirmation this past week.

The Epoch Times and others have reported that police employed the technology during the Canberra Convoy Freedom rallies outside Parliament House.

According to reports, Australian Capital Territory Policing confessed to using an LRAD.

Protesters had been claiming such a device was being used against them, but their claims up to now have been dismissed as “conspiracy theories” by the government and news media.

RebelNews.com noted that a spokesperson for police released a statement to the Times admitting:

“ACT Policing has deployed several types of loudspeakers and amplification devices to quickly and effectively convey voice messages to large, and often loud, crowds of people during the recent protest activity in Canberra.”

Various injuries from the demonstration are still being reported, the most of which seem to be sunburn and heat stroke. There are also allergic responses from what some believe to be chemical exposure.

There are two modes on the LRAD gadget. The LRAD may be used as a crowd control tool, sometimes known as a ‘sound cannon,' 'acoustic hailing device,' or a 'sonic weapon.'

It can also be used as a loudspeaker or amplification device to convey messages to the crowd in the other mode, which was utilized in Canberra.

The police were eventually forced to admit the use of the dystopian crowd control technology after One Nation party Senator Malcolm Roberts and Liberal Senator Alex Antic brought up the issue during an Australian Parliament proceeding.

Senator Antic, attending a Senate estimates meeting virtually, displayed a photo of the LRAD device beside members of the police as he asked about the use of such a device.

Though Australian Federal Police Commissioner Reece Kershaw, who was being questioned, evaded answering directly during the meeting, the growing controversy resulted in the police issuing the statement confirming LRAD use.

The Canberra Convoy, mounted by Australians in solidarity with the Canadian Freedom Convoy in Ottawa, led to a huge gathering in front of Parliament House, turning into one of the largest protests in Canberra’s history.

One journalist observer, Channel Nine political editor Chris Uhlmann, said the protest against Covid vaccine mandates was the largest he had witnessed in 30 years.

Some government aligned factions have tried to downplay the numbers.

“The crowd was massive,” said Uhlmann. “Trying to judge its size is a mug’s game, but it was easily the biggest I have seen in 30 years of covering protests in the capital.”

Livestreamers and members of the independent press said they encountered a lot of problems with their feeds throughout the day's proceedings. For many portions of the day, attendees reported weak or no reception.