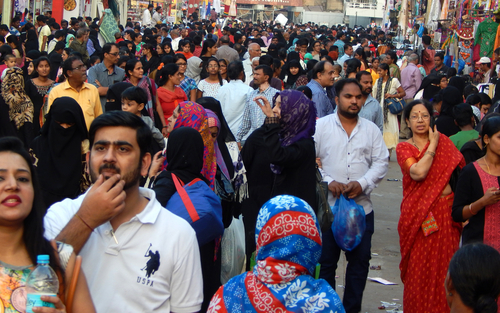 INDIA’S VAST DATA NETWORK ENDS PRIVACY FOR 1.3 BILLION PEOPLE. India now leads the world in digital payments, registering 25.5 billion of them in 2020, compared to 15.7 billion in China and a mere 1.2 billion in the U.S., according to ACI Worldwide, a digital payments technology company.

To use the payment system, an Indian must register with Aadhaar, the country’s electronic ID system, and be assigned a unique 12-digit ID code.

The new ID system and convenience of buying digitally has boosted the number of digital bank accounts and mobile phone ownership, the Financial Times reported.

About 92 percent of people have the cards, the government estimates.

“Aadhaar has laid the foundation for the digital transformation of the entire society,” Nandan Nilekani, who chairs India’s Infosys technology conglomerate and helped design the system, told the FT.

“People are finally realizing the ID is a method of empowerment,” he said.

But it doesn’t empower only individuals.

To get an Aadhaar card, each Indian must present a photo, be fingerprinted, and go through an iris scan.

The unique ID helps individuals navigate government bureaucracy and is now used for everything from school enrollments to hospital admissions, the FT noted.

Corporations also are tapping the data.

In a 2019 report called Dissent on Aadhaar, 15 lawyers, academics, and technologists parsed not only the system’s drawbacks but also its threats.

Glitches in Aadhaar can attach mistaken information to a person’s account, rippling that mistake through the person’s financial accounts, government records, and other databases, leaving the person helpless to repair the damage, the report said.

More broadly, “the Aadhaar project is a perversion of the constructive purpose of technology” and leaves the individual in danger of becoming “subservient to the needs of society,” Reetika Khera, the study’s lead author, warned.

The Financial Times was more pointed in its criticism.

“Perhaps the greatest—if, as yet, unrealized—concern about Aadhaar is that it has enabled the piecemeal construction of the infrastructure for mass surveillance,” columnist John Thornhill wrote on 12 November.

Although Aadhaar is voluntary, it has, in practice, become mandatory to access a range of services and opportunities, leaving Indians little choice but to enter the system.

“By linking biometric and demographic data from centralized public and private databases, it has become increasingly feasible for an authoritarian government to surveil its citizens’ lives,” Thornhill pointed out.

TRENDPOST: It has long been common for stores to issue loyalty cards that customers can use to amass points convertible to discounts or free merchandise. However, registering for those cards gives the merchant permission to share your personal information and purchase history with a range of other companies.

Debit and credit cards give financial companies a history of what you buy and where, profiling you to pitch ads tailored to your interests, just as search engines do.

India’s Aadhaar system expands that net that holds your personal financial information to include biometric details and digital trails to your medical records and other key details.

With these vast networks in place to collect and centralize data, we are giant steps closer to governments being able to examine every aspect of your life—what books and news sources you buy or subscribe to, what political or social causes you support, who you call or text, what messages you send.

MICROCHIP YOUR CAT, SAYS FERAL UK. The government of the United Kingdom has announced a mandatory microchipping program for domestic cats. Those pushing the measure say they want to make it simpler to reconnect missing pets with their owners.

But pet licensing, revenue raising, and even normalizing human microchipping are all pretty plainly connected to the incremental abuse of authority embedded in the dictate.

Those who refuse to have their cat injected with a chip risk penalties of up to £500.

The Department of Environment, Food and Rural Affairs announced the microchipping proposal on Saturday. According to the government, the initiative has enormous popular support, with "99 percent of people" supporting mandatory microchipping of pet cats.

“Cats are much-loved parts of our families and making sure that they’re microchipped is the best possible way of making sure that you are reunited with them if they are ever lost or stolen,” Animal Welfare Minister Lord Goldsmith commented about the microchipping in a statement.

The supposed nearly complete support begs the question why such a popular measure would need to be mandatory or carry heavy fines for noncompliance.

“Microchipping is by far the most effective and quickest way of identifying lost cats and can help ease the pressure on rescue charities like Cats Protection. Without a microchip, a lost cat will most likely end up being rehomed to a new home as there is often no trace of their original owner.”