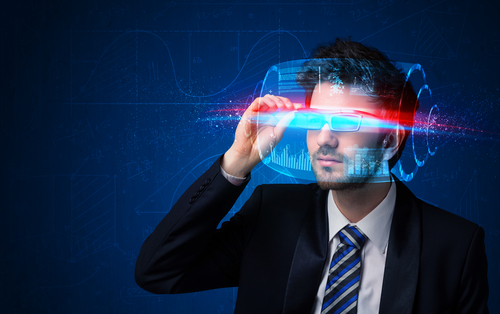 INNOVEGA OFFERS A LOOKING GLASS INTO THE METAVERSE

This past week Facebook made it official, changing its corporate name to “Meta”, signaling a focus to be a master corporation of a mixed-reality world.

Given Mark Zuckerberg’s penchants, the worlds Meta creates are likely to be more immersive versions of the manipulated and censored social media gulag that Facebook has come to represent.

If so, the rebranded old-guard tech company may find much innovative and stiff competition from cryptosphere projects predicated on very different visions of what the future should be, and who should own and control it.

Beyond the paradigm battles shaping up, there’s an overall sense that technologies of augmented and mixed realities are quickly developing and evolving.

One company that may soon be bringing the metaverse to more faces, is Innovega.

They’ve managed to develop a contact lens and normal looking eyewear combo that integrates the kind of data and 3d imaging into real world vision that looks pretty much like something Tony Stark might access in Marvel’s Ironman and Avengers movies.

As the company notes, wearing Innovega's contact lenses and spectacles together gives the impression of conventional prescription eyeglasses rather than a large, intrusive headset.

Some of the system's significant features include:

“Integrated optical paths [that] bring the actual world and the AR/VR digital material shown in the eMacula glasses into focus at the same time. The eMacula system was designed to give users with a broad field of view, high resolution, and rich 3D media experience, while the multi-patented iOptik smart contact lenses are daily disposable lenses that use the wearer's visual prescription to provide a tailored viewing experience. The iOptik lenses are meant to reduce eye strain and discomfort by keeping the display information in focus no matter where the user is looking in the real world.”

Innovega holds more than 40 patents related to their technology, and it promises a lot of objectively useful benefits, for the visually impaired, for example, and to aid collaboration in learning and research.

But like any technology, there are foreseeable dangers as well.

Like almost everything in the tech “quickening” that defines the current epoch, before it was science, it was sci-fi. Perhaps one of the most dystopian envisionings of a metaverse was present in Ray Bradbury’s Fahrenheit 451.

The novel continues to be highly relevant for its prediction that much of truth and reality must be verboten to any totalitarian regime, and the best way to purge it is to manipulate a populace into willingly and fervently doing it themselves.

But beyond the book burnings that gave the work its title (“Fahrenheit 451” refers to the temperature at which books burn), Bradbury offered a compelling glimpse into how easily reality would be willingly forfeited by people, if they could be seduced into enticing worlds of unreality.

Bradbury imagined a metaverse which would operate by enveloping people into a 3d world of interaction with their favorite television programs, via living room walls that projected the requisite environments, and allowed viewers to interact with the fictional characters.

People will join together who aren’t physically together. But it will get to the point where they will not be able to distinguish that fact.

Importantly, what Meta creates and gives, it can take away. Censorship on Facebook? Users of the company’s created worlds likely will have their experiences mediated and manipulated on a scale that’s hard to currently even imagine.

One thing Fahrenheit 451 didn’t contemplate was that a significant portion of the population might resist the illusions of the immersive home telescreens that kept people anesthetized from seeking real experiences, and important truths.

At the time he wrote it, the technology of television was so popular it may have seemed impossible that anyone would want to be without it.

So what if a considerable number of people reject wearing unobtrusive eyewear and becoming a two-way information node in the metaverse?

Will it be mandated to perform a certain activity, say driving a vehicle, or attending a college or concert? Will businesses mandate metaverse participation for employment?

The answers are beginning to come into distinctly sharper focus.