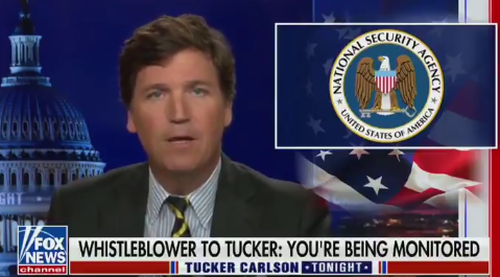 TUCKER CARLSEN TARGETED BY U.S. INTELLIGENCE. An NSA whistleblower has informed Tucker Carlson Tonight that private communications of the Fox News host are being surveilled.

Carlson has been a vocal critic of the Biden administration over imprisoning January 6th political protesters, and using intelligence agencies, the post offices, and banks and other businesses to illegally track and crack down on Americans with dissident views.

For that, the country’s most watched political commentator has now had the illegal abuse of power turned on him. Tucker reported:

“The whistleblower, who is in a position to know, repeated back to us information about a story that we are working on, that could have only come directly from my texts and emails. There's no other possible source for that information, period. The NSA captured that information without our knowledge, and did it for political reasons.

“The Biden administration is spying on us. We have confirmed that. This morning we filed a FOIA request asking for all information that the NSA and other agencies have gathered about this show.”

In 2010, the Justice Department spied extensively on Fox News reporter James Rosen, gathering his phone data, tracing his movements in and out of the State Department, and seizing two days of Rosen's personal correspondence. The Washington Post and other news agencies later detailed the extent of the government’s illegal abuse.

Corrupt politically focused government surveillance reached a history changing new low In 2015 and 2016, when the FBI and other agencies used a Russian Dossier they knew was funded by the Hillary Clinton campaign to gain FISA warrants to spy on Donald Trump’s campaign.

The dossier proved to be a leftist penned hoax, and the FBI was eventually scorched by an Inspector General for deceptively obtaining the FISA warrants and multiple other abuses of power.

But the “Russian collusion” allowed the media and President Trump’s political opposition to hound and substantially hobble his entire presidency.