THE PRESIDENTIAL REALITY SHOW®: SANDERS HAS A SHOT 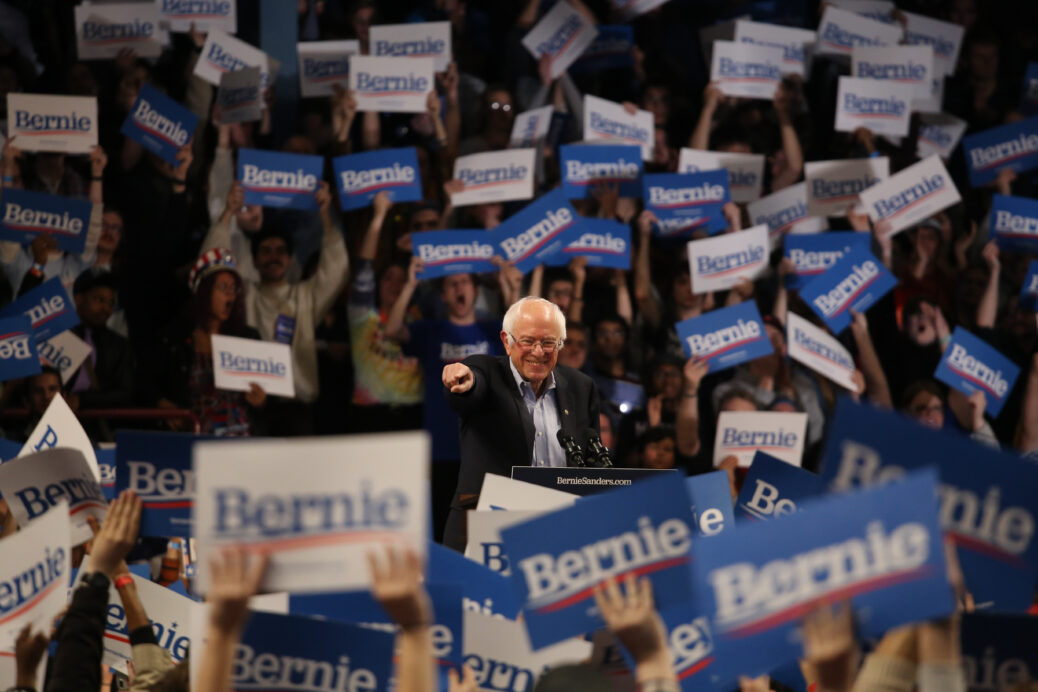 In May 2016, the Trends Journal was the first news source to forecast Donald Trump’s White House win. In our “2020 Top Trends” issue, one of our forecasts is “Trump 2020: By Default.”

We are now holding back on that forecast.

In our “Trump 2020: By Default” forecast, we had written that when Trump would win in 2020, he would be seen as an outsider. The man who was going to “drain the swamp,” end the endless wars, create jobs, cut taxes, and build the economy.

Senator Bernie Sanders, considered an outsider by the Democratic Party chiefs – perceived by key demographic target audiences as the anti-establishment candidate with no party affiliation and eschewing corporate contributions – has raised well over $100 million since he announced he was running for president last February.

While Sanders’ margins of victory in Iowa and New Hampshire were small, even President Trump has acknowledged that Sanders could be his toughest opponent in November. “Frankly, I’d rather run against Bloomberg than Bernie Sanders, because Sanders has real followers-whether you like him or not, whether you agree with him or not,” proclaimed Donald Trump last week.

TREND FORECAST: Sanders has stated, “We are taking on the Trump, the Republican establishment… and the Democratic establishment,” and “the grassroots movement that we are putting together of young people, of working people of people of color… want real change.”

Thus, when combined, there are more young, more working people, and more people of color, that, if united for Sanders, will outnumber Trumps graying, white working class and richer demographic. Therefore, Sanders can defeat Trump by wining key battleground states such as Pennsylvania, Michigan, Wisconsin, and Ohio that Trump won in 2016.

With his main stated reason for entering the race for the White House is to defeat Donald Trump any way he can, billionaire Michael Bloomberg bought his way into the Presidential Reality Show®. After having spent over $300 million on ads so far, with plans to double that amount heading toward Super Tuesday on 3 March, in the latest average of national polls as of 14 February, Mr. Bloomberg ranks third behind Sanders and Biden.

And, despite getting flack for his infamous stop-and-frisk policy he advocated as Mayor of New York City, Bloomberg is getting some support from African American lawmakers. Last Thursday, Mr. Bloomberg’s campaign put out a 26-state ad promoting his support for minority-owned businesses when he was mayor of New York City. The same day in Houston, he announced, “Mike for Black America” while being accompanied by a dozen black mayors.

It’s not yet clear, however, whether Mr. Bloomberg will be able to get past some of his previous comments about minorities. Last week, an audio clip went viral on Twitter with Mr. Bloomberg saying, “Ninety-five percent of your murders – murderers and murder victims – fit one M.O. You can just take the description, Xerox it and pass it out to all the cops. They’re male, minorities, 16 to 25. That’s true in New York, that’s true in virtually every city.”

Mr. Bloomberg can also be heard on the video, “And the way you get guns out of the kids’ hands is to throw them up against the walls and frisk them.”

And while Bloomberg apologized for championing the tough stop-and-frisk policy weeks before he announced his candidacy, as recently as the fall of 2018, he defended his stop-and-frisk policy as a successful crime deterrent. At that time, he also claimed the policy didn’t violate anyone’s civil rights despite the fact that in 2013, Federal Court Judge Shira A. Scheindlin ruled the way the policy was enacted by NYC police amounted to racial discrimination and was unconstitutional.

And while President Trump has lambasted Bloomberg for the stop-and-frisk policy, Trump endorsed it as recently as 2016 when he said in speech in Chicago that stop-and-frisk “works, and it was meant for problems like Chicago.”

The former mayor of South Bend, Indiana is having a good ride in the race to be the democratic candidate for president. He edged out Bernie Sanders in the delegate count out of Iowa and a strong second in New Hampshire has added fuel to his campaign.

But his background has not played well with the all-important African American vote.

In South Bend, his support from the approximately 100,000 African Americans is quite weak. And, as the campaign shifts to states like Nevada and South Carolina, where minority votes are premium, this could be a momentum killer.

The Chairman of the local democratic party in South Bend noted, “Pete went to all private, mostly white Catholic schools; growing up in that elitist education system makes it hard to understand what it’s like to be a poor African-American in South Bend.”

One incident that particularly stands took place last year, when a white police sergeant shot and killed a black resident. At the time, critics pointed out that the local South Bend police force have less minority officers than when Mayor Pete took the reins of the city.

Theo Randall, a professor at Indiana University, pointed out that as mayor, Buttigieg led the policy to tear down hundreds of derelict properties in poor neighborhoods but failed to get replacements built. Mayor Pete also has faced criticism for the racial disparity in marijuana arrests in South Bend during his 12 years in office. And, during a long stretch as mayor, there were no African-American leaders in his administration despite the fact the city was over 25 percent black.

A Quinnipiac University poll published just before the New Hampshire primary showed Mr. Buttigieg with only four percent of the African-American vote nationally… up from 0 percent in late January.

TREND FORECAST: While we maintain our forecast “Trump 2020,” considering the election is nine months from now, in this “anything goes” world of dramatic events with drastic outcomes, should the U.S. economy badly falter, Sanders shot of winning the White House will greatly increase.

There will be numerous Trump cards, however, that will be played to win votes from a pro-Bernie voter pool, among them peace in Afghanistan and a peace deal with North Korea, which we forecast will occur before Election Day.