THE GREAT AWAKENING VS THE GREAT RESET 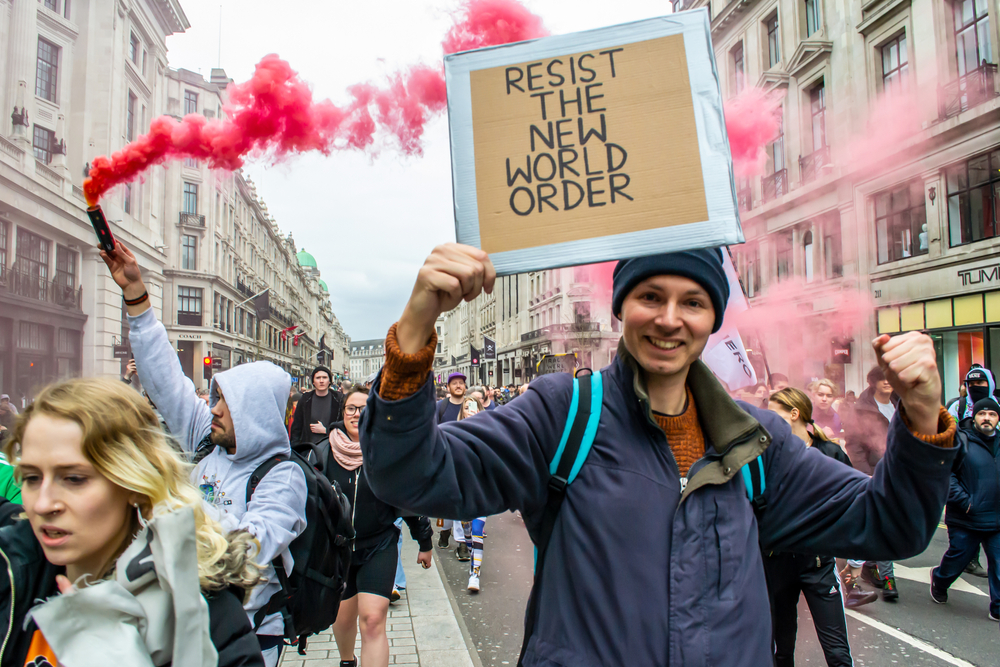 We have a choice folks—the most monumental choice humanity has ever had to make.

First, heed and never forget the words of Klaus Schwab, head of the World Economic Forum regarding what he calls “The Great Reset”:

“The pandemic represents a rare but narrow window of opportunity to reflect, reimagine, and reset our world.”

Schwab is right. But we don't have to go along with the way he wants to reset things.

COVID-19 is also an opportunity for a Great Awakening. More than any other event in history, it has shown that people in positions of power are too corrupt, too irrational, and too stupid to be trusted. They have demonstrated that they are far more dangerous than any disease real or imagined could ever be.

So, let's take COVID-19 as an opportunity to get rid of the current system because if we don't it will continue to find new ways to scare and con us into surrendering our freedom. And we must recognize that we have surrendered too much of our freedom already.

Corporations have gotten too big to fail, governments too powerful to curtail, and billionaires too wealthy to jail. So, first and foremost, we must take away their power and do away with their instruments of oppression which include, but are not limited to the following:

Get rid of passports. In a 2016 article, Business Insider reported that throughout the early 20th Century and as late as 1963 world leaders considered doing away with passports. Back then they recognized that passports were “a serious obstacle to freedom of movement.”

I think we should revisit that  discussion. The problem is, as stated in the article, that people get used to oppression in their lives and think they need it if it goes on long enough. And because we have allowed regular passports and TSA groping and snooping, they now want to impose masks and COVID vaccine passports not just for international travel, but for every aspect of our lives. The time has come to say no to all of it.

Get rid of all compulsory vaccinations in schools, the military, and on the job—not just the COVD vaccines, but all vaccines. Vaccination should be voluntary and one's personal choice. The human race has survived and thrived for 300,000 years without them. No government, business, or doctor has the right to tell anyone what to put in their body.

Arguments that some deadly plague requires forced vaccination or it helps protect people from disease are based on accepting the underlying narrative. But what if the underlying narrative is wrong? What if it's just a sales pitch to sell vaccines and promote a political agenda? The risk is too great so end all medical mandates. All health departments and other government officials should be allowed to do is advise and suggest.

Get rid of vaccine liability protection. Hold companies accountable if their vaccines kill and injure people. No more EUAs (Emergency Use Authorization) for vaccines. An EUA should only be for a drug that might save a dying person's life or for someone who is suffering with a low quality of life.

Vaccines to prevent disease do not fall into that category.

Get rid of all standing armies—especially the police. And to all the authoritarian personalities who think the cops can do no wrong, wake up. Most cops are supporting COVID-19 restrictions. They stand lined up against the people. They are there to protect the fascist corporate system, not We the People.

Replace them with a militia consisting of civilians who serve for a month and then rotate back into the citizenry. This will avoid the us versus them mentality of professional soldiers. All we need is a navy and an air force for protection against foreign invasion. And even for a citizen police force, end qualified immunity. Any government official or cop who breaks the law must be held accountable like everybody else. No special privileges.

Get rid of big institutions and bureaucracies like the WHO (World Health Organization) and the CDC (Centers For Disease Control and Prevention). Such bureaucracies and institutions only wind up becoming corrupt and self-serving—we don't need them. Do away with the deep state and corporate cabals. Ban all forms of shadow government. Get rid of all billionaires so they can't use their wealth to corrupt governments—allow them to have no more than say 10 or 20 million dollars.

And finally, recognize that all oppressive government measures, whether the excuse is to protect us from disease or some other manufactured crisis, are designed to divide us, to make us hate and fear each other, to pit us against each other. Don't fall for it. Don't allow them to divide us. Get on the right side of history folks. Get with the program. Say enough is enough and resist.

Thanks to mass protests all over the world the phony COVID narrative is beginning to crumble and a number of countries like the U.K. are ending their oppressive policies. At the massive protest in Washington, D.C. last January, Holocaust survivor Vera Sharav had this to say: (see 19 min 9 sec mark)

“People are being pushed around, denied normal interaction, and they're just following it like sheep. That's what happened in Germany essentially. All Germans were not evil. But most of them, the vast majority, simply went along. The German people elected a tyrant who took away their freedom and controlled their lives. But the German people were obedient. Their failure to resist the tyranny resulted in the genocide of millions of people.”

Unfortunately, COVID-19 has shown us that the majority will continue to stand by and do nothing.

Also realize that politicians and bureaucrats who have imposed these restrictions will hope that once they lift the restrictions that people will forget the evil they have done and even praise them for liberating them. They will also try to blame lower downs on the bureaucratic totem pole for the destruction and death.  Don't fall for it. Don't let them go quietly into the night. Arrest and jail all of them. Make them pay dearly for the crimes they have committed.

Some writers have speculated that there must be some external agent other than us humans driving this global insanity. And this is understandable. It's hard to believe that people could be so self-destructive, evil, and incredibly stupid.

Some say it's the work of the devil. Others have suggested the manipulation and even replacement of world leaders by space aliens and inter-dimensional beings. Who knows? But maybe, just maybe, it's just us after all. Maybe us humans are just plain nuts.

Michael J. Talmo has been a professional writer for over 40 years and is strongly committed to the protection of civil liberties. He also did three music videos on COVID-19. The Masker Mash, COVID Vaccine Man and The Corona Globalists. He can be reached at michaeltalmo@aol.com