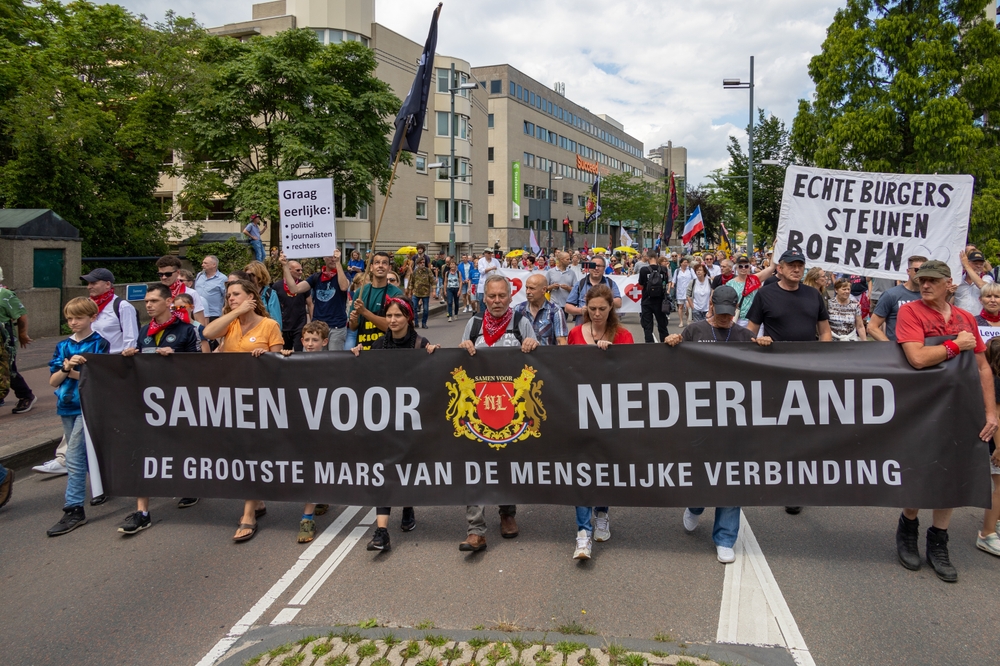 Farmer protests against radical green agenda regulations spread from where they began in the Netherlands, to other countries in Europe this past week.

Next-stage green initiatives designed to radically cut fossil fuel use, nitrogen fertilizers and raising cows, among other things, touched off a massive protest in the Netherlands in early July (See “DUTCH FARMERS DEMONSTRATE TO SHOW CLIMATE AGENDA IS A LOAD OF CRAP,” 5 Jul 2022.)

“Italian farmers also rise up: ‘We are not slaves, we are farmers! We cannot make ends meet!’ Then a warning to politicians: ‘Let's come to Rome!’ The unjustified and nefarious increase in raw materials and basic necessities have brought the agricultural sector to its knees.”

Protests became more generally anti-elitist as they have gained momentum in France, Germany, Macedonia and elsewhere.

The Russia - Ukraine conflict has surely helped ignite a growing frustration with the dictates of what the Biden administration termed “The Liberal World Order.”

Europeans have been asked to endure crushing gas and energy shortages and high prices as a result of attempts to sanction Russian gas.

The Eurozone set itself up for pain with years of “climate change” policies that saw Germany sunset its nuclear power station capabilities, for example.

They finally reversed at least some of those policies last week, voting to reclassify natural gas and nuclear power as “green energy” compliant.

Many protesters are blaming elitist NGOs like the World Economic Forum (WEF) for coordinating with and influencing governments to adopt policies that amount to “DeGrowth” and depopulation.

The Trends Journal has extensively detailed the elitist agenda, most recently in “DON’T CALL IT DRAGFLATION, IT’S “DEGROWTH” SAYS WEF” (21 Jun 2022) and “ENERGY INFLATION AND GREEN ENERGY TYCOONS” (17 May 2022).

Corporate and government media outlets sought to mostly ignore the Dutch protests. But that could no longer hold as protests spread.

An MSN / Newsweek opinion piece that slipped through the cracks observed:

“A popular uprising of working-class people against the elites and their values is underway—and it's crossing the globe. There is a growing resistance by the middle and lower classes against what Rob Henderson has coined the ‘luxury beliefs’ of the elites, as everyday folks realize the harm it causes them and their communities.”

The article noted that authorities and compliant media have been trying to use the Canadian Truckers COVID vaccine mandate protest as a blueprint for putting down the new popular groundswell (See “O CANADA: GOVERNMENTS UNLEASH NEW REIGN OF ‘TERROR’,” 22 Feb 2022.)

Farmers have been cast as extremists, and reporting has downplayed the protests. That means footage of massive assemblies aren’t being as widely seen as they deserve.

But European populations long mired in a cultural and demographic death spiral as a result of elitist policies and propaganda, may finally be reaching a breaking point.

Disastrous climate change dictates, prolonged COVID lockdowns, and now a raging and costly conflict affecting the whole continent and the whole world, are all part of the equation.

Russia has long stood out for its resistance to the “Liberal World Order” of globalism, elitist dictates, and conformity to a secularist anti-human agenda. That opposition is a large part of what has made it a pariah in the eyes of the puppet masters of the world.

Along with a few countries like Poland and Hungary, Russia has sought to incentivize the sustaining of their populations and culture, only to be castigated as “xenophobic” and green agenda apostates.

They have also objected to American hegemony—and the values and worldview it entails—in Eastern Europe. Their drawing a line at the instigations of NATO in Ukraine, now appears to be igniting a larger resistance to long-seeded policies designed to suppress and limit the power, potentials and even continuance of Europe’s peoples.

As the NewsBlog outlet put it concerning the Dutch farmer protests:

“PM Rutte and Kaag say to the Dutch people: ‘You will own nothing and you'll be happy.’ Rutte and Kaag are members of #WEF. Agenda of WEF is: globalist rich get richer. Poor people get poorer.”

The efforts of at least some Euro nations like Russia and Poland to encourage family policies to sustain population birth rates have been attacked as xenophobic, racist, environmentally irresponsible, etc. by elites and their green agenda proxies.

It’s encouraging to see The Epoch Times feature an article on 9 July squarely examining the role of elites in fostering human depopulation.

The article details the current state of downward spiraling birth rates in virtually all of the developed world outside of parts of Africa.

Steven Mosher, President of the Population Research Institute, was quoted detailing some of the modern history of depopulation efforts around the globe, led by the United Nations Population Fund, and elites like Bill Gates and Klaus Schwab.

That history has included ugly forced sterilization programs, child limit laws, and “incentives” for poor nations to depopulate, that truly do smack of racism and eugenics.

Mosher pointed to examples in South America, Africa and China. He noted that in Peru, for example, coerced sterilizations often focused on indigenous populations, while descendents of Spanish colonizers were not targeted:

“Doctors and nurses in Peru were given quotas of women to bring in each month for sterilization, on pain of losing their jobs unless they comply…”