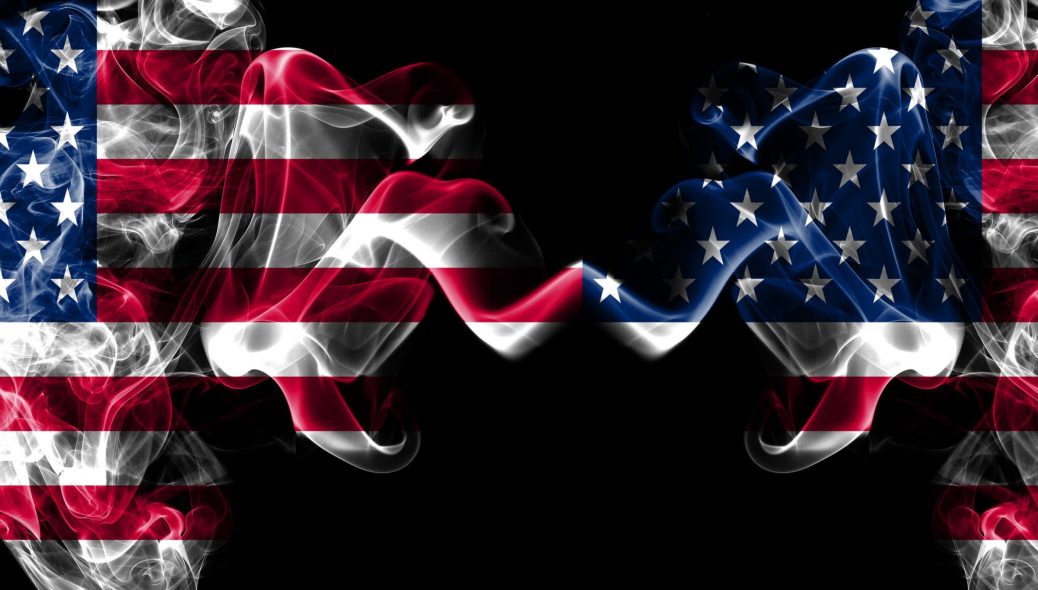 One of the more detailed articles arguing against a split of America into two (or more) nations, a March 2022 Newsweek piece, posited that doing so would be economically catastrophic.

There is an ever-growing divide between how red states and blue states envision hot button issues like abortion, medical mandates, gun rights, military interventionism, and government power vs citizen freedoms.

But there is also growing fundamental disagreement about the framework of government itself, including the Supreme Court, the Electoral College, the Bill of Rights, the power and role of domestic intelligence agencies and the Federal Reserve and Banking and Financial Institutions, etc.

Especially over the last 20 years, perhaps tracing to the razor thin 2000 Bush - Gore Presidential election controversy, the idea of dividing America into two ideologically and geographically separate nations has been a subject of consideration.

Often divisive moments have sparked an uptick in discussion and debate of the issue.  For example, following Donald Trump’s election in 2016, a spate of articles in 2017 covered the possibilities of an American “Civil War II.”

The COVID War and the marked difference in how some red states like Florida and South Dakota handled it, versus blue states like New York and California, fueled the issue.

Populist dissatisfaction with war money and mongering in Ukraine, while the U.S. border remains a fiction, and the country is sinking into a recession or worse, has created another divide that’s not strictly based on party affiliation.

And most recently, Supreme Court decisions on gun rights and abortion have again appeared to demonstrate that Americans have deep, mutually exclusive world views that are rendering a “one-state” solution increasingly disfunctional.

Kurt Schlichter is one of the latest to pen a proposal for a “national divorce,” in a piece at Townhall.com.

A recent Gallup Poll shows just how unsatisfied Americans currently are with the institutions and workings of the nation. The poll registered the lowest rates of confidence ever recorded, across a wide spectrum of issues and institutions. (See “AMERICAN CONFIDENCE IN MAJOR U.S. INSTITUTIONS DOWN FROM LAST YEAR” and “NY TIMES TRIES TO REHABILITATE GOVT DISINFORMATION BOARD,” 12 Jul 2022.)

No one is happy with where things stand as they are.

Would Two Americas Add Up to a Net Positive?

The Newsweek article titled “Civil War 2.0? Why Splitting Up Would Be a $100 Trillion Mistake” used several examples to argue its point.

In doing so, it made assumptions that are either questionable or not a given.

First, the article assumed it would take a war to split the country. And it rightly pointed out that such a war would likely be incredibly costly.

But the fact is, CW2 may ensue if America doesn’t peaceably divorce its two irreconcilably different factions.

In 2020, a segment of radicalized activists belonging to Antifa and BLM movements and organizations rampaged and caused over 2 billion in damage, while dozens were killed.

The economic devastation caused by ill-conceived COVID lockdown policies has been far greater. Recent findings show that red states, which generally locked down less and opened up sooner—to hyperbolic criticism from the CDC and MSM—have fared better economically as a result. (See “RED STATES FARED BETTER THAN BLUE ONES IN THE COVID ERA,” 12 Jul 2022.)

Currently more than 850 Americans are wallowing in Federal prison, most for doing nothing more than trespassing at the Capitol on 6 January 2021. More are being rounded up every day by a dangerously politicized FBI.

Americans are deeply divided on how and even whether its borders should be secured.

Abortion advocates are pointing to the travails of women (though they paradoxically can no longer define what a woman is) who have to face traveling to another state to have one, in the wake of the Supreme Court striking down Roe v. Wade.

In other words, not separating is having tremendous costs, no matter what your perspective.

Given those costs, and the ever widening divide causing a loss in confidence in the country as it is, across the political spectrum, working peaceably through an amicable separation might in fact reduce costs, and boost satisfaction in new entities which better align with citizen views. Such a separation could avert a hot conflict and save the associated human and economic costs.

A second objection of the Newsweek piece is that two Americas would mean two governments, and thus twice the costs:

“On a per citizen basis, it's more costly to run two governments than one. Defense spending, which for the U.S. is around $800 billion a year, might well explode. After the split, each side would be sharing a 2,000-mile acrimonious border with a nuclear neighbor—think Russia-Ukraine.”

Leave aside that the piece appears to implicitly make the argument that it would be better for Russia to subsume Ukraine (and perhaps Belarus, the Baltic States, Hungary and Poland, and so on) because it would save on government administration and military security.

It could as easily be argued that an American split would eventually show how the differing choices of government might result in either more or less efficiency and economic prosperity for citizens.

The example here is not Russia and Ukraine, but North and South Korea.

A third objection of the Newsweek article is that detangling and building separate infrastructures of energy industries, goods and services, and so on, would be costly, redundant and highly wasteful.

Again, it’s a “centralization” and neo-globalization argument. The current world situation is showing the limits and costs of failed globalization. The idea that countries should cede whole industries and core abilities to produce crucial goods and services to foreign regions, has resulted in huge costs for America.

The short version of the story is that China and more lately Russia, didn’t play along with America and the WEF doling out industries and sectors, together with a thinly veiled anti-human elitist green agenda.

Two Americas might mean a good kind of redundancy, as in resilient and self-reliant resurgences of domestic industry that are sorely needed, if citizens are ever to really prosper again.

Gerald Celente often points to China’s “dual circulation” policy and focus on economic self-sufficiency as keys to its success. A separation into two more ideologically palatable America’s might mean both have to focus again on providing core goods and services, in order to survive.

That would be a plus, not a minus.

There’s one more benefit of a “Two Americas” vision that might be of substantial benefit.

The globalist and too often destructive military adventuring that the country has engaged in in the post WWII era right up to the present moment, might finally be abated by an American breakup.

Other regions of the world, notably Europe and Asia, would have to step up and see to more of their own security. That wouldn’t be a bad thing.

China and Russia would undoubtedly exercise more influence in their regions. So be it. If they pursued empire and conquest, they would eventually meet the fate that empires do, that George Washington long ago cautioned the American experiment to avoid.

In important respects, the views of “Red State” Americans regarding the role and nature of government, and the nature of humanity itself, is becoming so estranged from views associated with “Blue States,” that the nation has become deeply dysfunctional.

The courts are politicized. The schools. Entertainment. Sports. The battle is on every front. There is no escape.

The two sides can literally no longer agree on what a woman is (or, to be fair, a man).

They not only disagree about the best candidates for office. They can’t agree on how to conduct an election.

Perhaps the escape is to give both sides what they want.

A recent tweet by NY Congress member Alexandria Ocasio Cortez illustrates the depth of the divide.

Cortez complained about the events of 6 January 2021, alleging government workers and officials colluded in an insurrection:

“Remember how there was tons of footage and evidence of officers & others inside on 1/6 supporting insurrectionists, but then everyone decided it was too politically risky to investigate thoroughly so they brushed under the rug and now we still have no idea who or what is safe?”

Millions of Red State Americans remember politicians and police bending a knee to BLM, and standing down in the face of widespread violence, pillage and intimidation throughout the country in 2020.

A June 2020 violent protest at the White House, in which a church across the street was torched, and more than 50 officers were injured, was never characterized as an “insurrection.”

Neither was a protest occupying the Hart Federal building in 2017, which sought to disrupt a Supreme Court confirmation process and intimidate politicians.

When two sides are trying to jail each other, silence each other by canceling them, and even killing each other in the streets…when government is so dysfunctional that it can’t or won’t enforce its own laws, or overreacts and runs roughshod over said laws to throw political opponents in jail…

…it might be time to separate peacefully, while it’s still possible.

There’s a rumor this year of an October surprise. Some believe former President Donald Trump will be arrested before the Congressional elections, charged with “insurrection” in connection with the events of January 6.

Hopefully, it’s just one of those conspiracy theories.

If not, it may be a monumentally tragic step toward the kind of separation fight that no American should want.

For related reading, see “ARE AMERICANS HEADING TOWARD A SILENT SECESSION?” (4 May 2021).