TEACHERS: “WE SPEW OUT CRAP, CENSOR THOSE WHO DEFY US” 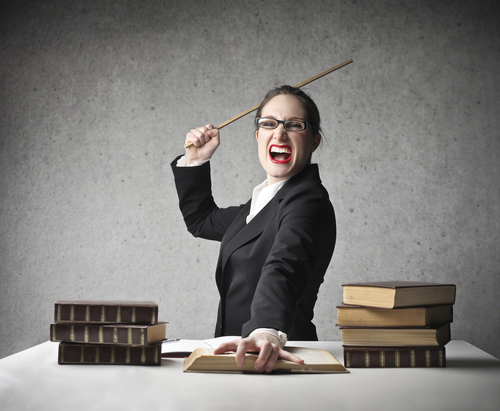 Have you heard of the "Slap a Teacher Challenge"? Allegedly, it's one of several "challenges" issued to users of the social media platform TikTok, daring them to carry out various activities and post videos of themselves doing so.  So far there have been only a couple of incidents that might be attributed to this "challenge," but talk about it has certainly "gone viral."

An article in The Wall Street Journal, on 9 October, tells how Becky Pringle, in her official capacity as president of the National Education Association (the largest union representing teachers) sent a letter on 8 October to the operators of TikTok, Facebook, Instagram and Twitter.

The letter seeks sympathy for all the stresses that teachers are suffering as a new academic year begins and many students are returning to school after a COVID-driven absence of more than a year-and-a-half. "We're all exhausted, stressed and stretched so thin it feels like we'll crumble," Pringle wrote, "and now we're facing growing violence fueled by corporations with no oversight and no accountability to the communities they harm."

Her letter appeals to those tech leaders, on behalf of the nation's teachers, to pledge to better regulate their platforms and "to put public safety over profits."

You are Stupid! We Know Best

But then Pringle makes the grand leap of conflating the threats posed by viral "challenges" like "Slap a Teacher" with the "vitriol against school leaders" spread, on those same social media platforms, by those who dare to question or oppose "safety protocols" like mask requirements or vaccine mandates.

She then doubles-down on her conflation fallacy by including the "conspiracy theories" advanced by those who have the effrontery to confront educators and school boards over curriculum issues such as the teaching of Critical Race Theory.

All of this, Pringle whines, has "helped create a culture of fear and violence with educators as targets." Her remedy is to call for not only federal assistance (as one group representing school boards has done) in "managing" the "harassment and intimidation" of educators, but for the social media giants to step up and quash the dissemination of such dangerous "misinformation."

TRENDPOST: Trends Journal has seen, for some time now, the desecration of the sanctity of free speech and the clamor for more censorship, identifying it as a "megatrend"; see, for example:

And, moreover, the current education system is an antiquated relic of the Industrial Age which is both costly to the general public and inefficient as a learning mechanism.

TREND FORECAST: When the COVID War was launched in February 2020 and universities and schools began shutting down, we noted it was the beginning of the upending of the industrial age education system that was long ready for a facelift and heralded in a new, more effective approach to education: online learning. (See “INDIA’S ONLINE-LEARNING AN INVESTMENT WINDFALL, SOLIDIFYING ‘INTERACTIVE U’ FORECAST IN TRENDS JOURNAL,” the 2017 article “INTERACTIVE-U: THE INDIA MODEL” and the August 2020 article “INTERACTIVE U IN THE U.S.A.”)

Gerald Celente had forecast 25 years ago that online learning would replace the factory model education methods that got their footing in Prussia after the Napoleonic Wars. The coronavirus outbreak has shown that in-person learning can be replaced, which will only further accelerate the move to all-interactive learning.