STARBUCKS BACKS DOWN ON VAX MANDATE 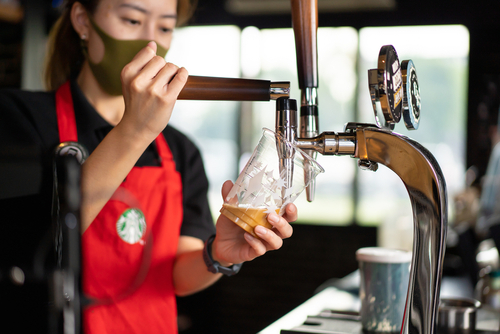 With a shortage of workers in the hospitality sector and employees unionizing putting pressure on Starbucks, the coffee giant announced last week it backtracked on its requirement to force its employees to be vaccinated.

This came after the U.S. Supreme Court blocked the Biden administration’s attempt to enforce its mandate for employers with over 100 employees, or some 80 million workers in the country, to be vaccinated or submit to testing every week.

John Culver, the company’s chief operating officer, cited the court’s ruling in a letter to employees but said leadership still encourages workers to take the shot.

“We continue to believe strongly in the spirit and intent of the mandate,” Culver said, according to The Wall Street Journal.

The report said U.S. companies seem to be split on how to handle the Supreme Court defeat. Citigroup will continue to have the mandate in place for returning workers but General Electric announced that it suspended its vaccine requirements.

Starbucks has faced some dissatisfaction from store-level employees about their overall treatment and career advancements inside the company. (See “STARBUCKS STORE TO UNIONIZE, A TOP TREND FOR 2022?” “STARBUCKS GETS BIGGER MARKET AS SMALLS GO BUST” and “SPOTLIGHT: WORKERS ON DEMAND.”)

The Journal obtained an internal memo from Starbucks and the company informed workers that the Omicron variant has been challenging and both employees who are unvaccinated and vaccinated are getting infected.

“It is important that we take some urgent steps to ensure these partners are staying home,” the memo read. The coffee chain, which is based out of Seattle, employs some 228,000 workers in 8,000 stores in the U.S.

The company told The Associated Press that the “vast majority” of its workers are fully vaccinated, but declined to give a specific number.

TREND FORECAST: The Trends Journal has reported extensively on President Biden's continuing gambit to get Americans to take the vaccine, its implications and its eminent failure. Indeed, in the Celente and The Judge podcast a week before the Supreme Court’s decision, Judge Andrew Napolitano accurately had forecast that the Supreme Court would reject the Biden mandate.

Also see “SUPREME COURT PARTIALLY BLOCKS BIDEN VAX MANDATE,” “MAJORITY OF AMERICANS WOULD RATHER QUIT THEIR JOBS THAN TAKE THE JAB. WILL THEY BACK DOWN?” and “BIDEN HOSPITAL VAX MANDATE LOSING SUPPORT.”

As the COVID War winds-down there will be less vaccine mandates, but they will not disappear and new ones will be enforced in later years to fight new “strains” and “variants.” Again, it’s the bottom line and the drug dealers, i.e. Big Pharma, will be pushing more new vaxxes to boost their bottom line.