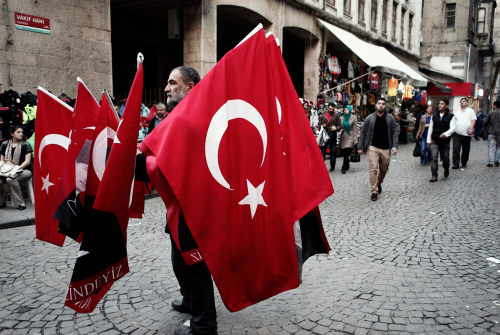 Inflation in Turkey soared to 36.1 percent last month, the most in the 19 years that strongman president Recep Erdogan has ruled and enforced his notion that low interest rates counter consumer price increases.

Inflation was running at 37 percent in September 2002, two months before Erdogan took office.

The year-over-year explosion surpassed analysts’ expectation of a 30.6-percent annual rise through 2021 and nearly doubled the central bank’s October prediction that inflation would end the year at 18.4 percent.

In December alone, the rate of increase grew an additional 13.58 percent, according to the Turkish Statistical Institute, with food, transportation, and other staples leading the increase.

December’s Producer Price Index jumped 19.08 percent from November and 79.89 percent for all of 2021. Transportation prices rose 53.66 percent and the cost of food and beverages 43.8 percent.

Turkey’s inflation rate will remain above 40 percent throughout this year, Goldman Sachs has predicted, and some economists say the rate will climb to 50 percent unless the country’s president and central bank can be persuaded to reverse interest-rate policy, Reuters reported.

Turkey’s economic tailspin slashed 44 percent from the value of the lira, the national currency, last year, its worst tumble in almost 20 years.

To prop up the lira, Turkey’s central bank asked exporters to sell 25 percent of their hard-currency revenues to the bank in exchange for lira.

Exporters are a cash target for the bank because Turkey’s exports rose by a third last year to $225 billion.

Erdogan, a self-described “enemy” of high interest rates, has insisted that low rates bring down inflation, despite economic theory and his country’s own experience proving him wrong.

TRENDPOST: Since last March, he has fired a series of central bank governors and replaced them with a loyalist who has followed Erdogan’s directive to cut interest rates even as inflation surged, as we reported in “Turkey’s Financial Markets Crash After Agbal Firing” (30 Mar 2021) and “Turkey: Another Day, Another Central Bankster Fired” (1 Jun 2021).

TURKEY SPENDS MORE THAN $7.3 BILLION TO RESCUE LIRA IN DECEMBER

Last month, Turkey’s central bank spent $7.3 billion in five officially announced interventions to buy lira, the country’s currency, in an attempt to save it from crashing.

Through 2021, the lira lost about 45 percent of its value against the dollar as inflation rampaged unchecked, reaching at least 40 percent by one independent analysis, as we reported in “Turkey: A Crime to Tell the Economic Truth?” (5 Oct 2021).

The sale of dollars to buy lira was part of a plan, announced by Erdogan in late December, to prop up the currency and entice Turks to put money into savings accounts, which we reported in “Turkey’s Markets Crash, Currency Crisis” (21 Dec 2021).

Following the announcement, the lira lifted from its record low of 18.36 to the dollar and returned to 11 against the buck, but then slid back down to 14.

The country’s net reserves are about $66 billion in the red, Goldman noted.

TREND FORECAST: Erdogan has framed his opposition to higher interest rates in moral and military terms, proclaiming himself an “enemy” of high interest rates and casting his policy to be part of an “economic independence war.”

As we noted in our article “Turkey’s Markets Crash, Currency Crisis,” it is not surprising that Erdogan frames his failed policies in warlike terms. As Gerald Celente notes, “when all else fails, they take you to war”—in this case, casting his economic failures as a response to what he will term “hostile outside forces” in hopes of unifying the nation behind him.

It’s not working: Erdogan’s popularity keeps sliding along with stock values and the lira.

Erdogan will not acknowledge the abysmal failure of his policies. He also is unlikely to surrender power, whatever the result of the next election: his 2018 re-election was marked by widespread claims by opponents and independent observers of ballot-stuffing and other forms of corruption.

Turkey will continue to spiral down into economic and political chaos, prompting street demonstrations and, in all probability, violent response from government troops as Erdogan clings ever more desperately to power.

As the global economic recovery decelerates—and as inflation keeps rising across the globe—the lira and Turkey’s economy will continue to decline. Ongoing fears of the Omicron virus will worsen Turkey’s plight; nearly 13 percent of its GDP rests on travel and tourism.