SPOTLIGHT: THE RETURN OF CHINA 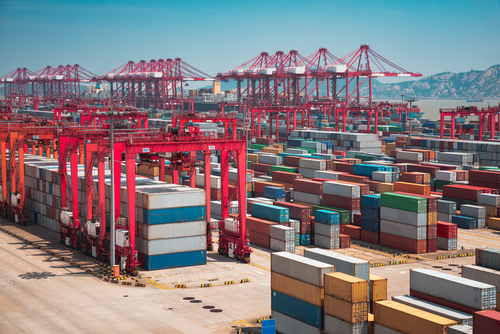 The figure stunned analysts, who had held a median expectation of 8 percent, The Wall Street Journal noted.

The surge likely was the result of factories clearing back orders that had piled up while more than 40 of the country’s metro centers were locked down in late March through May to stop the spread of the COVID virus, economists told the WSJ, not a surge in new orders.

If so, the surge is unlikely to be sustained once old orders have been filled. Rising interest rates and inflated prices already are leading global consumers to spend less on goods and more on services. (See “Consumers Switching Spending Habits. What Does It Mean?” 8 Feb 2022.)

As exports slow, China will be forced to depend more heavily on domestic spending to fuel economic growth. Governments at all levels already have announced new plans for infrastructure spending.

Consumer spending has lagged, hobbling China’s plan for a “dual circulation” economy in which domestic consumption and manufacturing for export play equal roles.

To goose consumers, local and national governments, along with China’s central bank, are unleashing a range of measures to stimulate spending, including special mortgage rates for first-time home buyers, subsidies for purchases of electric cars and notebook computers, and loans for airlines and small businesses.

China’s imports, flat in April because of lockdowns, grew by 4.4 percent in May.

The export bump lifted China’s May trade surplus to $78.8 billion, more than a 50-percent increase from April’s $51.1 billion.

INVESTORS BUY BACK INTO CHINESE STOCKS

Also, the U.S. is considering reducing or repealing tariffs on some Chinese imports on 4 June as part of its fight against inflation, U.S. chief trade negotiator Gina Raimondo said in a 4 June television interview.

The new inflow of money to Chinese stocks washed into U.S.-listed Chinese companies as well.

On 7 June, NASDAQ’s Golden Dragon index, which tracks share prices of Chinese companies, jumped more than 5.4 percent, while the NASDAQ overall managed only a 0.4-percent gain.

After falling 18 percent earlier this year, the MSCI China Index, which follows 744 companies, could bounce up 20 percent by 2023, he said.

TRENDPOST: China has sided with Russia in its war on Ukraine. However, that has failed to darken investors’ enthusiasm for the economic prospects of a country with 1.4 billion consumers.

China may have spoken on Russia’s behalf in the war, but it has done little to aid Russia materially. The reason: the business of China is business, not war, as we have said many times.

China’s anti-COVID lockdowns that immobilized 325 million people in 46 metro areas for ten weeks had a silver lining: inflation in April and May was gauged at just 2.1 percent, the National Bureau of Statistics reported.

Food and fuel prices rose, as they have around the world, but the almost complete halt to travel and entertainment across much of China negated much of the increase, the bureau said.

Also, exports ticked up in May, a signal that supply-line disruptions caused by China’s shutdown are easing now that the restrictions are being lifted, The Wall Street Journal noted.

Softer commodity prices brought May’s increase in China’s producer price down to 6.4 percent from 8 percent in April, the WSJ reported.

TREND FORECAST: Although more nations are working toward becoming Self-Sufficient Economies aligned with our Top 2022 Trend, China will remain Manufacturer to the World for years to come.

For the foreseeable future, China will not repeat the economic performance of its manufacturing sector during the COVID War.

China’s GDP will grow by 4.3 percent this year, the World Bank predicted last week, cutting its outlook from the 5.1 percent it had foreseen in December, before China locked down 46 metro areas and 325 million people to halt the COVID virus’s spread.

China’s government had projected a 5.5-percent expansion this year, modest by the country’s past economic record, but now is downplaying that goal, as we reported in “China’s GDP Could Contract This Quarter, Premier Warns” (31 May 2022).

China’s growth will pick up speed during the year’s second half, aided by government stimulus spending, bond-buying, and loosened regulations on the housing industry to rekindle demand, the bank said.

China’s housing and property development industry, which has accounted for as much as 30 percent of the nation’s economy in the past, teetered on the brink of collapse due to over-borrowing and overbuilding, which documented in articles including “China’s Real Estate Market Teeters on Evergrande’s Debt” (21 Sep 2021), “China’s Over-Borrowed Property Industry Cracking” (19 Oct 2021) and “Evergrande in Default, Fitch Says” (14 Dec 2021), among others.

The Chinese economy will grow by 5.2 percent in 2023, the bank predicted.

“While the government has stepped up macroeconomic policy easing, the dilemma facing decision-makers is how to make the policy stimulus effective” while COVID-related restrictions are still in place, the bank noted.

Growth in investment, particularly the government’s redoubled infrastructure spending, will offset weakness in the consumer economy, the report said.

Rising food and fuel prices will spark inflation but that will remain within or below Beijing’s target of “around 3 percent,” according to the bank’s forecast.

If the virus remains under control and all restrictions are lifted, growth could be even stronger, the report added.

However, the bank warned, China runs the risk of falling back on using government-funded infrastructure spending as the chief means of economic growth, as it has done in the past.

“High levels of indebtedness of corporations and local governments limits the effectiveness of policy easing and store up further risks down the line,” Ibrahim Choudhury, the bank’s chief China economist, said in a comment accompanying the report.

TREND FORECAST: China’s dual circulation economic policy, which aims to make consumer spending an equal partner with manufacturing in the country’s financial growth, has so far failed to materialize.

The weakness: consumers have failed to do their part and spend adequately.

During the COVID War, they scrimped and, so far, the government has been unable to persuade them to give up enough of the habit enough to make the policy effective.

China will continue to use its’ wealth and the power of its command economy to incentivize household spending through the rest of this year or until consumers can independently shoulder their portion of the dual circulation plan.