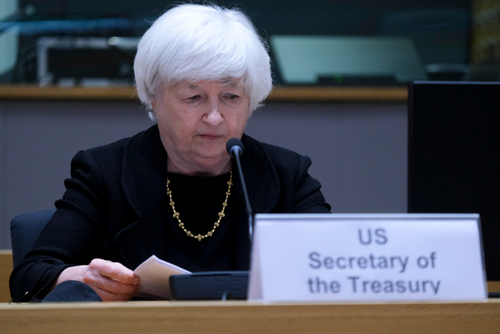 Advanced nations should not adjust upward their 2-percent inflation targets just because inflation is running at high rates, U.S. treasury secretary Janet Yellen told reporters on 19 May in Bonn, Germany, where she was attending a meeting of finance ministers of the G7 nations.

“The challenge is to meet inflation targets that have been established,” she emphasized.

U.S. inflation reached 8.3 percent last month; the rate has set 70-plus-year records in some European countries and is running near 50 percent in Argentina and 70 percent in Turkey, as we reported in “Argentina’s Interest Rate Hits 44.5 Percent” (29 Mar 2022) and “Turkey Heightens Scrutiny of Foreign Currency Transactions” (17 May 2022).

The U.S. Federal Reserve will need “both skill and luck” to cut inflation to the Fed’s 2-percent target rate, she said.

“It’s conceivable there could be a soft landing”—reversing inflation without throwing the economy into a recession, she added, “but this is a very difficult economic situation—not only with the supply shocks we’ve had but with the war continuing and the sanctions continuing to be applied.

“We may face more inflationary risks to the global economy,” she warned.

During the week of 16 May, the average gas price in the U.S. was $4.59 a gallon, Yardeni said. A year earlier, the average was $3.04, according to the American Automobile Association.

“No wonder the consumer sentiment index is so depressed,” Yardeni analysts said in a note accompanying the study’s findings.

“The wonder is that retail sales have been so surprisingly strong during April and May,” the analysts wrote.

However, inflation ran at 8.5 percent, meaning that much, if not most, of the 12-month rise in consumer spending was due to rising prices, not to consumers buying a larger volume of stuff.

The faltering euro, which we highlight in “Dollar Edges Toward Parity With Euro” in this issue, and the European Central Bank’s base interest rate of -0.50 percent, which has held steady since 2014, are fanning inflation, Christian Lindner, Germany’s finance minister, warned last week.

The central bank should raise rates now, both to tackle inflation and support Europe’s shared currency, he said.

Inflation in the Eurozone ran at 7.4 percent in April, The Wall Street Journal reported, the same rate as Germany’s, which set a record in that nation.

Europe’s “inflation risks emerge from the development of the external value of the euro, especially in view of central bank policy in the U.S.,” Lindner said.

“Negative interest rates are a thing of the past,” Nagel said.

“When you’re in an inflation environment around 7 percent…interest rates have to go up,” he said. “We need to take decisive action.”

Nagel is a member of the ECB’s governing council, which sets interest rates.

“I fully endorse” Nagel’s call for a rate hike in July, Lindner said, and he hopes that “more steps will quickly follow.”

In June, the ECB is expected to stop buying bonds to stimulate the economy. That will lay the foundation for a rate hike at the council’s 21 July meeting.

Britain’s 9-percent annual inflation rate in April marked its fastest pace since March 1982 and a gain of two full percentage points from March, the Office of National Statistics reported on 18 May.

Inflation will run at double digits in October when energy price caps will rise again, the Bank of England warned.

Hotel and restaurant bills added 8 percent. Prices in leisure, entertainment, and the arts shot up 5.9 percent, the most since at least 2006.

Factory gate prices added 14 percent last month against 11.9 percent in March, the sharpest climb since 2008; the cost of raw materials soared 18.6 percent, a jump likely to be passed, at least in part, to consumers, economists told Bloomberg.

“Firms are becoming reluctant to invest, storing up problems for the economy in the future,” Kitty Ussher, chief economist at the Institute of Directors, said to the news service.

The bleak numbers sent the pound sterling down against the dollar to as low as $1.2387.

April’s 9-percent inflation surge was more than double the growth in wages over the same period, a condition that also pertains in Canada, as we report in “Canada’s Inflation Slows in April But Still Sets 30-Year Record” in this issue, and in the U.S., which we noted in “Wage Growth Slows as Inflation Speeds Up” (8 Mar 2022).

“The cost of living is likely to intensify from here, adding to the Bank of England’s anxiety that inflation expectations may become unanchored,” with consumers expecting prices to rise beyond control indefinitely, Bloomberg economist Ana Andrade told the news service. “That fear is compounded by an exceptionally tight jobs market and raises the risk that the central bank will raise rates a little further than forecast,” she said.

The bank has bumped its interest rate four times this year, bringing it to 1 percent. Markets are forecasting a rate of 2.5 percent by January.

The higher rates will double interest on the public debt this year to £80 billion; the inflation rate that prevailed when that estimate was made has since risen further.

Andrew Bailey, the central bank’s governor, has referred to inflation above the bank’s 2-percent target rate as “temporary” for too long, a growing number of analysts say, Bloomberg noted.

The refrain has been common among central bankers in the U.S. and Canada as well.

Jerome Powell, chair of the U.S. Federal Reserve, called soaring inflation “temporary,” then “transient,” before admitting last November that it was neither, as we reported in “The Powell Push: For Better or Worse” (7 Dec 2021).

Tiff Macklin, Canada’s central bank chief, acknowledged on 27 April in testimony before the Canadian senate’s banking committee that the Bank of Canada had misjudged inflation as being temporary.

“We got a lot of things right,” he told the committee. “We got some things wrong, and we are adjusting,” he said in comments quoted by the Financial Post.

“The mistake is that central banks around the world are very confident that inflation will simply fall right back to the target,” previous Bank of England chief Mervyn King said in a television interview last week. “Most people are going to be worse off” because of the bank’s past inaction, he said.

Unrestrained inflation will cast an estimated 250,000 British households into “destitution,” Bloomberg reported, adding £2,400, or about $2,990, to living costs for the average household this year.

Britain’s inflation rate is likely to be 5.3 percent in 2023, the highest among G7 nations, according to the International Monetary Fund.

Inflation has not been this high since the 1980s, when Margaret Thatcher’s conservative government spiked interest rates and slashed public spending.

The moves whacked inflation from 24.5 percent in 1975 to 4.1 in mid-1983, but sank the economy into recession; unemployment skyrocketed.

Economists now put the chance of a recession in the U.K. at 40 percent, Bloomberg said.

Inflation in Canada in April crept up just 0.1 percent from March to 6.8 percent, a  mark not seen since 1991, according to Statistics Canada’s latest report.

April’s pace was a tenth of the 1.0-percent gain registered the month before.

Consumer prices in Canada are growing twice as fast as wages, Bloomberg reported.

Food prices grew by 9.7 percent, year on year, marking the fifth consecutive month in which the price rose annually by more than 5 percentage points.

The cost of services jumped 4.6 percent from a year earlier, also faster than at any time since 1991.

“This is the relative calm before another downpour in next month’s report, as gasoline prices are tracking a double-digit increase for May alone,” Douglas Porter, chief economist at BMO Capital Markets, warned in a comment to Canadian news service BetterDwelling.

Also, “the labor market is extremely tight, with the unemployment rate at a record low,” Matthieu Arseneau, the bank’s deputy chief economist, said in a comment quoted by BetterDwelling.

Markets are pricing in a half-percentage-point interest rate increase by the Bank of Canada’s governing board when it meets next week.

That would bring the bank’s base rate to 1.5 percent, with analysts expecting the rate to reach 3 percent before next year.

“What went up still isn’t coming down in Canadian inflation, and might not anytime soon,” Desjardins Securities strategist Royce Mendes said to Bloomberg.