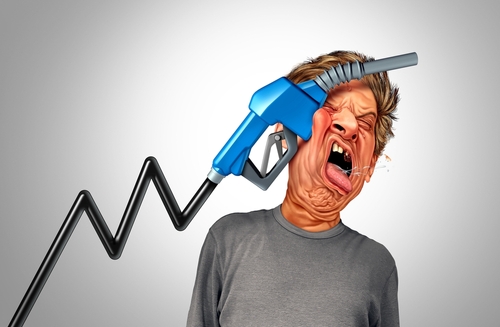 Prices in Germany shot up 7.8 percent in April, year over year, the fastest since 1981, after setting a record pace of 7.6 percent in March.

The increase was driven by higher energy costs.

Producer prices in March saw the greatest annual surge since records began being kept in 1949.

“The hoped-for slight easing of inflationary pressure, which seemed tangible in view of the fall in petrol prices, once again failed to materialize,” Elmar Voelker, an analyst at LBBW Bank, said in a Reuters interview.

“This reads as another clear request” for the European Central Bank to “finally give up its hesitancy in terms of exiting its ultra-loose money policy,” he added.

In other words, he thinks the bank should raise its interest rate from the -0.50 percent, where it has held since 2014.

The bank has indicated it will begin emptying its bond portfolio in the near future so it can raise interest rates later this year, probably in the third quarter, which we reported in “ECB To Stop Bond-Buying Stimulus Program This Year” (15 Mar 2022).

Germany will see an overall inflation rate this year of 6.1 percent and 2.8 percent in 2023, finance minister Robert Habeck predicted in a public statement last week.

Electric bills nationwide have risen an average of 8 percent over the past 12 months, the U.S. energy department reported, with rates in Florida, Hawaii, Illinois, and New York spiking as much as 15 percent.

In the first two months of this year, electricity’s price averaged 14 cents per kilowatt-hour (kW) nationwide. It hit 25 cents in Massachusetts and 38 cents in Hawaii, the highest in the nation.

Bills are rising in tandem with the cost of natural gas, which fuels about 40 percent of the country’s electricity generating plants.

Since then, the Ukraine war has driven gas prices even higher. The West has not banned Russia’s gas, but the U.S. has committed to ship more liquefied natural gas to Europe, kicking domestic prices higher.

Natural gas prices have as much as tripled in some places, compared to the price less than a year ago when a gas glut scuttled the U.S. market.

Electricity’s price also has climbed as parts and equipment to repair and maintain the electric grid have become more expensive. (See related story in this issue.)

Costs will continue to rise, not only alongside fuel prices, but also because utility companies will need to invest hundreds of billions of dollars in the years ahead to upgrade the electric infrastructure and harden it against threats ranging from cyberattacks to extreme weather events, The Wall Street Journal noted.

A year from now, the typical electric rate will be 15 cents per kW, or about $150 a month for households burning 1,000 kW per month, the U.S. Energy Information Administration has calculated.

Renewable energy is unlikely to offer much relief, the WSJ noted: after falling for years, the cost of solar panels and wind turbines is rising again due to supply chain clogs.

BEER SALES UP, DESPITE HIGHER PRICES

The increase was attributed to the reopening of bars and restaurants after the Omicron virus sparked a new round of shutdowns earlier this year.

Other consumer products companies such as Nestlé and Procter & Gamble also have seen sales rise along with prices, indicating that consumers have stuck with their favorite brands so far, even as inflation sets multi-decade records.

However, at some point prices will rise high enough that consumers will trade down to bargain or generic brands or buy smaller volumes of their favorites, those companies’ executives have warned.

Anheuser-Busch reported sales shrank 4.2 percent for the quarter in North America, where drinkers have been drifting away from the company’s flagship brands of Budweiser and Bud Light in favor of craft beers.

Sales also fell in China, where as many as 45 cities and 328 million people are locked down by government order against the COVID virus.

“In an environment like this, which we haven’t seen in 40 years, we aren’t going to be able to not pass [higher] prices to the consumer,” he said. “Productivity [improvements] simply can’t cover this type of inflation.”

Prices for food that people eat at home are up an average of 10 percent over the past 12 months, he noted.

The company raised its sales forecast to a 4-percent increase this year, up from the 3 percent it estimated earlier.

However, Kellogg’s is seeing some dips in sales of cereal and frozen meals as prices climb. Snack sales are more resilient to price hikes, Cahillane noted.

Kellogg’s shares added 3.5 percent on 5 May after the quarter’s results were announced. The company’s stock price is up about 11 percent this year as of 6 May.

Goodyear Tire & Rubber saw sales grow about 20 percent in this year’s first quarter as it raised prices by more than its costs increased, the company said.

Sales shot up 63 percent in the Americas.

Higher expenses for raw materials, energy, and transportation will force prices still higher this year, as will plant closures in China under the country’s anti-COVID lockdowns. (See related stories in this issue.)

Goodyear reported profits of $96 million for the period on sales of $4.91 billion, which bested analysts’ forecasts of $4.73 billion.