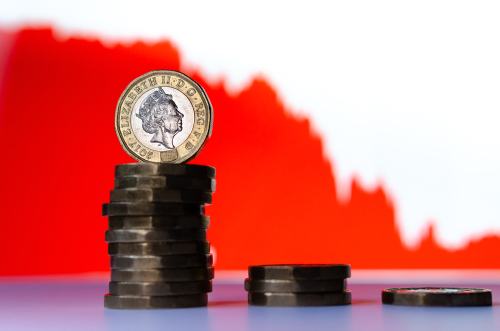 Britain’s inflation rate in August edged back to 9.9 percent after reading 10.1 percent in July.

The cost of motor fuels fell; prices for food and clothing rose more slowly than in the previous month.

Core inflation, which screens out food and energy prices, actually rose in August, moving up 6.3 percent compared to 6.2 percent in July.

It was inflation’s first month-to-month decline since September 2021 and stirred hopes that inflation may have peaked.

However, prices are still climbing at their fastest since the 1980s and the Bank of England is likely to add another half point to its key rate when it meets this week, boosting the cost of buying homes, cars, and other major items.

The bank had said that inflation could reach 13 percent next month when the government’s limit on the price utility companies can charge for natural gas and electricity will increase by 80 percent to more than £3,500 annually.

However, Liz Truss, Britain’s new prime minister, has announced a plan to cap household utility bills at £2,500 a year, which is likely to keep inflation below the bank’s expected rate.

Truss has said her new cost cap will knock as much as 5 percentage points off inflation’s pace.

Some analysts seem to agree.

Inflation now will reach only 11 percent next month and then “drop sharply next year” because of Truss’s move, economist Samuel Tombs at Pantheon Macroeconomics wrote in a note to clients last week.

Truss’s cap also should soften the impact of a recession, should the U.K.’s economy slip into one.

However, the new policy also frees households to spend more in other areas, which might keep up inflationary pressures.

In addition, Truss has refused to fund her £2,500 limit by laying a windfall profits tax on energy companies and will borrow instead, which will strain her government’s budget and crowd the lending market.

TREND FORECAST: As we have noted several times before, central banks began raising rates too late to impact inflation quickly.

According to the International Monetary Fund, interest rates coupled with compounding interest, should equal or surpass the pace of inflation.

If the Bank of England followed that advice, its interest rate would now be above 9 percent.

Instead, the bank will continue to raise rates in small steps. That will eventually slow spending—but it also will allow inflation to continue longer, robbing households and businesses of their buying power, putting a lingering drag on the economy, and raising the risk of recession.

In August, inflation in Argentina reached 79 percent, its fastest pace in 30 years, and analysts the central bank surveyed said prices are likely to be rising by 95 percent at year’s end.

The rate has grown by 23 percentage points in less than three months.

Keeping the country’s interest rate apace with inflation is a key aspect of Argentina’s $44-billion bailout agreement with the International Monetary Fund.

The central bank also has intervened to bolster its peso’s value against the dollar, which stood at 143 to the buck last week.

TREND FORECAST: For those holding currencies such as the strong U.S. dollar that are willing to take economic risks, while we do not provide financial advice, now is a time to consider investing in real estate or other assets in nations whose currencies are sharply lower and their economies are weakening.

Inflation in Nigeria reached 20.5 percent as food and diesel prices rose against a weakening currency.

Core inflation, excluding food and energy costs, clocked in at 17.2 percent, indicating that inflation is embedded across the economy.

Prices have been rising by double digits in Nigeria since 2016. Recently, the situation became worse as the country ran short of dollars and the Ukraine war and Western sanctions have caused shortages of basic foodstuffs.

Bread, cereal grains, meat, and other foods inflated at an annual rate of 23 percent in August, compared to 22 percent in July.

“The combined effect of insecurity, global supply disruptions, and higher logistics costs are still taking a toll on general prices,” the Financial Derivatives Company in Lagos wrote in a note last week.

Nigeria’s slumping currency means that the country has not benefited from the food export agreement between Ukraine and Russia; more food is arriving but it costs more.

The country’s central bank has raised interest rates 2.5 percentage points since May, setting it at 14 percent now. The bank could add another half a percent next week, analysts told the Financial Times.

However, “inflation is being driven by supply-side factors like higher input costs and food shortages, which limits overall policy effectiveness of higher interest rates,” analyst Pieter Scrabante of Oxford Economics Africa said to the FT.

He predicted Nigeria’s inflation will peak in the final quarter of this year.

TREND FORECAST: In our Top Trend of New World Disorder, we have noted that shortages and rising prices of basic commodities such as food and fuel often drive residents of emerging nations into the streets to first protest, then—if the situation is not eased—to cause chaos and, ultimately to often form social and political movements that can collapse governments.

Sri Lanka’s government fell this summer, partly as a result of food and fuel shortages. Venezuelans filled the streets for months last year and earlier this year as inflation made it impossible to afford basic goods. The catastrophic revolt and civil war in Syria began with a shortage of bread.

The agreement between Ukraine and Russia to allow grain exports out of the war zone will not be enough to ease Nigeria’s crisis.

Odds are growing that Nigeria soon will erupt in protests and worse. And, as the socioeconomic conditions deteriorate, the refugee crisis will escalate as people flee nations to escape to safe haven countries.