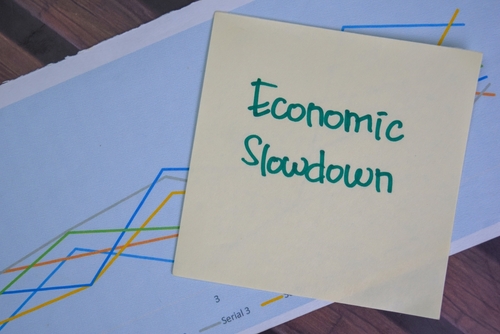 The world’s economies slowed this month because of high inflation combined with rising interest rates, The Wall Street Journal reported.

Manufacturers in the world’s largest economies are grappling with continued supply chain blockages and higher costs for supplies, due in significant part to China’s two-month shutdown to combat a surge in the COVID virus.

The service sector in Australia, the Eurozone, U.K., and the U.S. also slowed, largely because of rising prices, The Wall Street Journal said.

In the U.S., purchase of newly-built homes dropped 16.6 percent in April from March as the median home price climbed to $391,200.

It was the fourth consecutive month of declines, the commerce department said.

Service businesses such as tourism have recovered a significant measure of activity lost during the COVID War, but higher prices are dragging on trade, the WSJ noted.

Also in the U.S., the economy-wide purchasing managers index (PMI) dropped from 56.0 in April to 53.8 in May, indicating slowing activity in both manufacturing and services.

Readings above 50 signal growth; the higher the rating, the more robust the business activity.

In the U.K., the pace of business sank from 58.2 last month to 51.8 in May, the steepest fall in the European region and the lowest in 15 months.

Productivity among the 38 member states of the Organization for Economic Cooperation and Development crept up just 0.1 percent in this year’s first quarter compared to 2021’s final three months, the group announced.

In mid-May, the United Nations cut its global growth forecast for 2022 from 4 percent to 3.1. It now sees U.S. GDP growing 2.6 percent this year, no longer the 3.5 percent it had predicted earlier this year.

TRENDPOST: We have said in many articles that the Fed’s interest rate hikes will not have an immediate material impact on inflation.

To get a quick grip on rising prices, the Fed would have to set its rate above that of inflation, which would put it above 8.5 percent. An 8.5-percent Fed funds rate would loft interest rates on mortgages and car loans well into double digits, spinning the economy into a depression and throwing millions out of work.

TREND FORECAST: The most likely way that inflation will ease is that consumers simply will stop buying because they are unable, unwilling, or both, to pay the prices that goods carry.

Fed actions will help, as will the end of China’s lockdowns and the untangling of supply lines. However, the old saying will rule: the cure for high prices is high prices.

IS U.S. INFLATION BEING MIS-REPORTED?

Two factors have some critics contending that the U.S. rate of inflation is actually higher than reported.

First, in the 1980s, economists dropped the cost of mortgage payments and home maintenance from the Consumer Price Index (CPI). They substituted the cost of rent and began counting “homeowners’ equivalent rent,” or what it would cost to rent your house if you were not the owner.

The rationale for the change: homes are an investment that you later may sell for a profit. In contrast, rent is pure consumption that returns you no financial gain. Therefore, it serves as a more accurate measure of consumer costs.

Opponents say that the method fails to capture the rising cost of living paid by homebuyers, especially first-timers, as prices escalate.

Because that cost is omitted from calculations, today’s real inflation rate may be higher than it was in the 1980s when inflation was racing at double digits, according to a recent paper in the Quarterly Journal of Economics.

If home prices and mortgage interest were included in the index, U.S. inflation in February would have been 11.5 percent, not the 7.9 percent officially reported, the paper argued.

Other analysts complain that the way the CPI samples rent costs fails to fully represent rents that are rising rapidly, as U.S. lease costs have over the past year.

Second, the CPI traditionally had measured the cost of a usual bag of groceries with bread, milk, eggs, soup, and so on.

Then, in 1999, the CPI incorporated the assumption that, as inflation rose, consumers would trade down, swapping slightly cheaper items for their usual, more expensive choices.

This change knocked about two-tenths of a percentage point off the official inflation rate.

However, the CPI fails to include swaps that reduce expenses even more, such as buying chicken drumsticks instead of t-bone steaks.

These more significant changes are relegated to a measure called the “chained CPI.”

While the conventional CPI showed inflation running at an 8.3-percent annual rate in April, the chained CPI clocked it at 7.8 percent.

These different methods of calculations have their partisans and the U.S. labor department is constantly making tweaks to improve the CPI’s accuracy, The Wall Street Journal noted.

As a result, at any given time the CPI “may differ from what’s happening on the ground,” Alan Detmeister, formerly in charge of the U.S. Federal Reserve’s wages and prices office, told the WSJ.