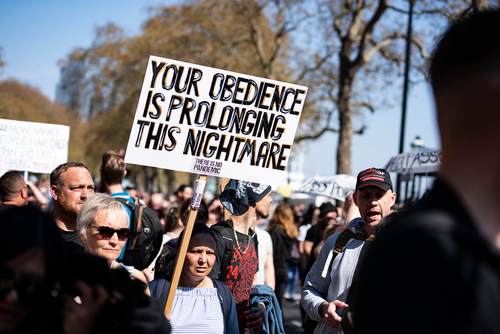 Each week we have been reporting on the protests erupting around the world following government lockdowns, vaccine requirements, travel bans and other draconian mandates. Protesters took to the streets across Europe last weekend to rail against new COVID-19 measures that governments insist will help limit the spread of the Omicron variant.

The demonstrators say their freedoms are being trampled on, and businesses say they cannot survive another holiday season where they are forced to limit occupancy or close altogether.

TREND FORECAST: It should be noted that these massive demonstrations that are barely reported by the mainstream media, are just the beginning of a major march to Freedom. And, as we had forecast, new anti-vax, anti-establishment, anti-immigration populist movements will rapidly accelerate.

GERMANY: Protests broke out Saturday in major German cities to voice their opposition to vaccine mandates and new COVID-19 restrictions.

Düsseldorf police estimated that 4,000 protesters marched on Saturday and several thousand gathered in Hamburg. One sign was translated from German to, “My child is not your superhero, Pfizer!” Another read, “Hands Off Our Children,” and another, “No to Compulsory Vaccination!”

Berlin announced that it will ban most travelers from Britain with the hope of slowing the spread of the Omicron variant. Under the new guidelines, visitors from Britain must provide a negative test and quarantine for two weeks, regardless of their vaccination status, the BBC reported.

Germany recorded 50,968 cases on Friday with another 437 deaths. Karl Lauterbach, the German health minister, said he believes the Omicron variant will unleash a “massive fifth wave” of infections, the BBC reported.

BELGIUM: Belgians marched in Brussels on Sunday waving banners that read “I’ve had my fair dose” and “enough is enough.” Belgium United for Freedom, the group that organized to protest, urged those who attended to remain peaceful.

The protesters took issue with the country’s use of the COVID Safe Ticket and what they see as a “vaccine obligation,” The Brussels Times reported.

“We are not anti-vaxxers,” Tom Meert, the president of Europeans United, said. “But first you say vaccination is a choice, and then you start punishing people when they have made a choice.”

Health care workers in the country will have three weeks to be fully vaccinated or face losing their jobs.

The country of 11.5 million has seen an average 9,998 new infections per day. About two million have been infected since the start of the outbreak and 27,895 have died. About 88.6 percent of the population is vaccinated, Reuters reported. There were about 1,200 people in the hospital as of Monday.

Brussels introduced new measures to counter the spread of the Omicron variant weeks ago after Prime Minister Alexander De Croo warned that country to brace for an autumn wave of infection.

The measures called for a reduced number of people permitted at large events and the presentation of these COVID-19 passes for events with more than 50 people, the paper reported. Face masks are now required on public transportation and in shops for all residents over the age of six. Protesters see new measures being taken by neighboring countries and believe Brussels will follow their lead.

The protests remained largely peaceful, but ITV.com reported that some protesters could be seen lobbing objects at police.

PARIS: Video emerged on social media that showed thousands in Paris protesting new COVID-19 measures, which include a travel ban to or from Britain.

France announced that residents cannot travel to the U.K. for tourism or professional reasons. Those who travel to the country from the U.K. will be forced to take a PCR test and quarantine for seven days. The Guardian reported that the latest measure is an example of the icy relationship between the two countries over Brexit, migration, and fishing in the region.

French Prime Minister Jean Castex also announced that major public parties and fireworks will be banned on New Year’s Eve and said residents should give holiday parties a second thought and take a self-test before getting together, France 24 reported.

The government said that a bill will be voted on early next year to further solidify the vaccination pass to enter restaurants or use public transportation.

“We cannot allow that the refusal of a few French people to get vaccinated affect the life of the entire country,” he said. He did not mention that those vaccinated can still come down with the virus and transmit it.

Euronews reported that protests broke out in various cities across France over the new restrictions. Some held signs that called the government in Paris a “dictatorship.”

Hoteliers at the Morzine resort in the French Alps told the Financial Times that they were slammed with cancellations after the announcement of the travel ban.

“Every British booking we’ve got as of this Saturday is going to be canceling, which represents well over 50 percent of all Christmas and new year bookings and over 60 percent of January bookings,” Sara Burdon, the communications manager at the Morzine tourism office, told the paper.

The paper pointed out that she said the new restrictions could hurt their businesses even more than when the ski lifts were closed in 2020, because there is no more government support.

The report said other countries like Italy, Greece, and Portugal have taken new measures to limit the spread of the virus through tourism by mandating that even those vaccinated be tested upon arrival in the countries.

NEW ZEALAND: Thousands of New Zealanders joined a rally in Wellington on Thursday to voice opposition against COVID-19 restrictions, with some holding signs that read: “Plandemic” and “Is this the future you want?”

NDTV reported that the country has reached a 90 percent vaccination rate, and the island nation is known to have among the strictest COVID-19 guidelines in the world and has essentially sealed off its border to visitors.

The protests were out to demand an end to the mandatory vaccination requirement, Reuters reported. The report said Wellington has mandated vaccinations for teachers, workers in the healthcare field, and other sectors.

The protests were peaceful and placards read “lockdowns destroy lives.”

Prime Minister Jacinda Ardern reportedly eased some restrictions prior to the Christmas holiday and the government approved the Pfizer vaccine for children five years old and older.

The country’s COVID-19 safety monitoring board said Monday that the death of a 26-year-old man with myocarditis was likely due to the Pfizer COVID-19 vaccine.

"With the current available information, the Board has considered that the myocarditis was probably due to vaccination in this individual," the board said, according to Bloomberg. "The Board noted that Covid-19 infection can itself be a cause of myocarditis as well as other serious illnesses and it remains safer to be vaccinated than to be infected with the virus."

UNITED KINGDOM: Thousands of protesters took to the streets in London to voice their opposition to vaccine passports and new COVID-19 mandates that have been put in place to slow the spread of the Omicron variant.

The rally in Parliament Square was attended by protesters carrying signs that read, “Truth, Rights, Freedom,” “No Vaccine Passports,” and “No Medical Apartheid.” Some of the demonstrators shouted “shame on you” as police clashed with protesters who were accused of hurling eggs at a shop in Regent Street at about 3pm Some police officers said they sustained minor injuries during the clash.

About an hour later, protesters were accused of throwing beer cans and launching flares at officers on Whitehall, The Guardian reported. No arrests were made.

The protest sparked online debate. Some saw the demonstrators as misguided, while others praised them for standing up for their personal freedoms.

“I’m not there but watching the huge London protest!” Emma Kenny, a psychologist for “This Morning TV,” tweeted. “These are people from all walks of life, with one common goal, to ensure liberty remains and tyranny is brought down. Drs, nurses, religious groups, mums, dads, triple vaccinated and the vaccine hesitant all sharing this moment.”

Together Declaration has been identified as the umbrella that is calling for an end to mandatory vaccinations and vaccine passports. The group has obtained over 170,000 signatures in support.

Local reports said the protest was organized by groups called Take a Stand London, Save Our Rights UK, and The Great Reopening. Video emerged that showed the protesters aggressively confronting police and chanting “shame on you.”

Sky News reported that the protesters defied warnings from Sadiq Khan, the mayor of London, who raised alarm about the “huge surge” in cases.

The report pointed out that there were 1,534 patients in the city, which is up 28.6 percent from last week. There were 26,418 new cases on Saturday, which marks the highest number since the start of the outbreak. The report said scientific advisers have warned that hospital admissions could reach 3,000 a day without new restrictions.

Sajid Javid, Britain's health minister, told the BBC that he, too, is preparing for a new-look to the holiday season in light of the new infections and said he will not be hugging his elderly mother as frequently as he would like.

“It’s time to be more cautious,” he said. “We know this thing is spreading rapidly.” He told the network that he will not rule out a new “circuit breaker,” which would mean a dramatic lockdown.

Last week, The Trends Journal published a story titled, “U.K. FU: COVID RULES FOR THEE, BUT NOT FOR ME.” We pointed out that Prime Minister Boris Johnson has faced criticism over a holiday bash in 2020—at the height of the lockdowns—that occurred inside Number 10 Downing Street. He claimed to have known nothing about it, but he lost serious political capital.

Weeks after reports of the party emerged, Johnson’s Conservative Party lost a special election for Parliament that his party had held for 200 years.

“Tonight the people of North Shropshire have spoken on behalf of the British people,” Helen Morgan of the centrist Liberal Democrats, said. “They have said loudly and clearly, ‘Boris Johnson, the party is over.’”

TREND FORECAST: These re-imposed COVID War measures will further drag down economic growth while escalating populist anti-vax, anti-establishment movements. Ignoring the facts of broad based citizen outrage against draconian measures being imposed upon them by politicians and bureaucrats, the media will continue to moronically label those fighting for freedom as right-wing conspiracy theorists... just as they label those opposed to the mandates in America as Trump supporters.