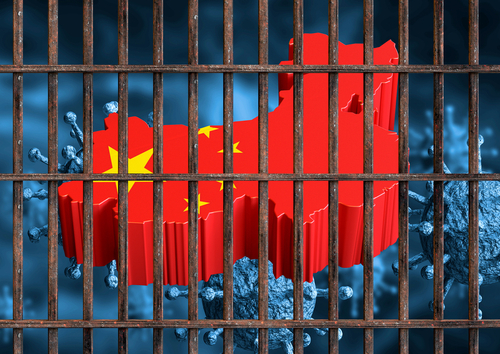 Adidas, Intercontinental Hotels Group, and Starbucks are among the multinational firms that have seen revenues sink because of China’s draconian anti-COVID lockdowns, which have shut an estimated 325 million people in at least 46 cities into their homes or workplaces for two months.

Affected areas include tech hubs such as Shenzhen and Shanghai, which also is China’s financial center and home to the world’s busiest port.

The hotel company reported sales per available room in China, a benchmark of hotels’ financial performance, in this year’s first quarter were 42 percent below those in the same period in 2019.

Hilton Worldwide Holdings’ China sales for the period were off 45 percent.

Starbucks’ first-quarter sales in the country slid 23 percent and a third of its 5,400 restaurants there were shuttered as of early May.

In April, China’s overall retail sales slumped 11.1 percent year on year; in the U.S. for the month, retail sales climbed 8.2 percent—although U.S. inflation for the month ran at 8.3 percent, meaning the gains in spending were due to higher prices, not to shoppers taking home more goods.

China’s e-commerce also suffered under the lockdowns, as many cities and even entire regions banned trucks entering or leaving.

Many global companies have come to rely on China in recent years to bolster weak sales in other countries. Now China has weakened, while much of the rest of the world has cautiously reopened its doors.

Because the lockdowns have continued through the first two months of the current quarter, many companies expect this quarter’s Chinese results to be more dismal than the previous one’s, leading to a year that fails to meet expectations.

“We have virtually no ability to predict our performance in China in the back half of the year,” Starbucks CEO Howard Schultz told The Wall Street Journal.

As a result, the company will offer no guidance at present for its financial results in 2022, he said.

Shanghai officials have announced a gradual reopening of the city, beginning in June.

More than 500 ships were idling outside Shanghai’s port in mid-May, MSNBC reported.

TREND FORECAST: China’s extreme reaction to a modest rise in virus cases and low death count as a percentage of the population has destroyed its chance of meeting its economic goals for the year.

According to Worldometer, out of a population of 1.39 billion people (the .39 is bigger than the U.S. population), since the COVID War broke out in their city of Wuhan during their 2020 Lunar New Year, The Year of the Rat... the grand total of 5,226 Chinese died of the virus.

China will have struggled to reach the goal even without locking down more than 40 cities and 325 million people: the war in Ukraine has trashed the world’s previous economic plans and forecasts, as we reported in “IMF Cuts Global Growth Forecast, Warns of “Doom Loop” (26 Apr 2022) and in earlier articles.

The only reliable economic forecast this year is that the world will not perform as well as had been expected before the Ukraine War began.

Even China’s ongoing effort to create a Self-Sufficient Economy, which we noted again in “China Makes Major Push Toward Economic Self-Sufficiency” (10 May 2022), will not be effective enough soon enough to save it from entering a period of Dragflation, during which costs and prices will continue to rise as economic activity contracts.

The newest lockdown will cost the country years of progress toward the success of its dual circulation economy (“China Announces Dual Circulation Economic Policy,” 9 Sep 2020), in which manufacturing and consumer spending hold equal shares of a robust economy, and toward its emergence as the world’s leading economy.

In April, China’s industrial sector reported its smallest profits since March 2020, with the figure 8.5 percent lower than a year earlier.

Profits were another victim of president Xi Jinping’s zero-tolerance anti-COVID policies that virtually froze the economy of vast swaths of the country for the past two months.

Shanghai—China’s largest city, a key tech manufacturing center, and site of the world’s busiest port—has barricaded more than 25 million people into their homes or, worse, their workplaces since late March.

Industrial production was significantly lower for the month. Retail sales sank 11 percent and unemployment reached a two-year high of 6.1 percent.

The lockdown’s impact is likely to doom China’s hopes of a 5.5-percent expansion of its GDP this year at a time when Xi is bidding for a third presidential term.

Beijing has established a suite of supports for businesses and households and launched a new round of infrastructure spending. The government cut mortgage rates last week for a second time this year.

“We expect policies to ease further on the fiscal front to boost demand, given downward pressures on growth and the uncertainty of the recovery pace from COVID disruptions,” Goldman Sachs analysts wrote in a research note last week.

China’s economy could shrink in the current quarter, premier Li Keqiang told tens of thousands of local government officials in a 25 May videocast.

China’s most recent losing quarter was in 2020’s first three months. The GDP contracted 7 percent as the country struggled to emerge from its COVID-inspired shutdown and posted its first losing quarter in 30 years.

President Xi Jinping declared lockdowns across China under a literal “zero-COVID” policy. As many as 325 million people in 46 metro areas were shut into their homes or workplaces. In some cases, port terminals and factories were shuttered if one worker tested positive for the virus.

“We will try to make sure the economy grows in the second quarter,” a transcript of Li’s comments read.

He called for “reasonable growth” and said “this is not a high target” and it is a “far cry from our 5.5-percent goal” for annual growth.

China’s economy is now “to some degree worse” that at the beginning of the COVID War in early 2020, Li admitted.

Corporate liquidations shot up 23 percent since Shanghai, China’s financial hub and largest port as well as a tech manufacturing center, shut down in April.

He also said that unemployment among 18-to-24-year-olds had reached a record 18.2 percent and that the jobless rate among migrant workers had skyrocketed.

Li called on government officials at every level to help companies return to full productivity after emerging from the lockdowns.

“Some provinces are reporting that only 30 percent of businesses have reopened,” he said. “That must be raised to 80 percent.”

“We must ensure the smooth functioning of supply chains and COVID prevention are both achieved,” he exhorted the officials.

TRENDPOST: As China’s economy goes, so goes the world’s.

Vehicle production is down in Europe and the U.S. because parts stopped coming from China. Electronics manufacturers are waiting for assembled products to be shipped from the mainland. A range of household products, from hammers to dog food dishes, have gone unshipped.

Barring an unexpected, and very unlikely, economic boom in the near future, China’s lockdowns will trim a full point off global GDP this year.