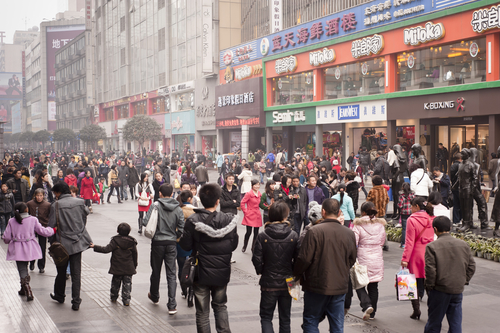 The International Monetary Fund (IMF) predicts China’s economy will grow by 4.8 percent this year, not the 5.7 percent it had foreseen previously, the agency said in its annual outlook report.

“Growth momentum has slowed considerably, with consumption lagging every other part of the GDP,” Helge Berger, the IMF’s head of mission in China, said in a statement quoted by The Wall Street Journal.

“The investment-driven recovery has reversed earlier, hard-won progress in rebalancing the economy [between manufacturing and consumption], adding to the challenges of achieving sustainable, high-quality growth over the medium term,” IMF’s analysis said.

The government’s drastic restrictions meant to curb the spread of the Delta and Omicron viruses, coupled with Beijing’s heavy-handed crackdowns on the real estate, financial, and tech sectors to control what are seen as “capitalist excesses,” have sapped enthusiasm among businesses and individual investors, the WSJ said.

To goose the economy, the People’s Bank of China has cut interest rates, continued quantitative easing, urged banks to lend more, and leaned on local governments to boost infrastructure spending.

China’s government is likely to set a growth target of 5.5 percent for this year, according to economists who consult with government officials and spoke to the WSJ.

Xi Jinping, China’s president, will bid for an unprecedented third term in office later this year. Part of his claim to leadership will be that the Chinese economy continues to outperform those of western nations, especially the U.S., a government-involved economist told the WSJ.

TREND FORECAST: China’s Lunar New Year which kicked off yesterday, is not off to a strong start. Its National Bureau of Statistics reported that the nation’s manufacturing purchasing managers index fell to 50.1 in January, down from 50.3 in December. The 50 mark separates expansion from contraction.

The Caixin China manufacturing PMI, which focuses on small private businesses, fell to 49.1 in January, its lowest level since February 2020 when the COVID War began.

Further highlighting the weakness heading into the New Year, the sub index which measures total new orders fell to 49.3 in January, export orders were at 48.4 in January and factory production was at 50.9.

To help juice its economy, while much of the world is raising interest rates, China is lowering theirs. Its central bank lowered its benchmark lending rates in December and January.

The government has urged banks to extend more home loans to push up the sagging real estate market, and encouraged banks to help bail out cash-strapped property developers with distressed assets.

And, when China relaxes its draconian lockdown mandates, it will dramatically drive up consumer spending which has been sluggish.

Therefore, while its economy will not have the 8.1 percent GDP growth rate it had last year, overall it will remain strong and grow in the 5 to 6 percent range.

The plan, formulated by officials in Evergrande’s home province of Guangdong, calls for the company to sell almost all of its assets, with the proceeds going to pay creditors.

Unsold assets would be taken over by the China Cinda Asset Management Co., a large Evergrande creditor and state-owned operation that manages bad corporate debts.

Evergrande’s property service and electric vehicle businesses, which are held separately from the property development business, would remain intact under the plan. The two units now are worth more than the rest of Evergrande, which has seen its market value fall below $3 billion.

Government officials have made it clear that Beijing will not bail out Evergrande and central bank officials scolded the company for its “blind expansion and diversification” and poor management as the housing market was slowing.

If China’s government approves the proposal, a protracted struggle would follow to decide which creditors are paid how much.

The outcome would provide clues about how China plans to sustain economic growth while reducing recklessness and overborrowing, which has contributed to that growth while also damaging the larger economy.

The free-wheeling real estate sector also has been at odds with Chinese president Xi Jinping’s announced goal of “common prosperity,” an initiative to close a widening wealth gap in the country’s fast-growing economy.

It will be a tricky balancing act; in mid-January, the International Monetary Fund warned that China’s slowing housing markets are a risk to global economic growth.

Evergrande said in a 19 January statement that it will present a restructuring proposal within six months and begged offshore bondholders not to take dramatic legal action to collect what the company owes them.

Meanwhile, the company was officially designated “in default” after failing to make several bond payments in December.

Efforts to sell parts of the business have produced few results and a plan to sell the company’s Hong Kong headquarters has stalled.

On 27 January, Los Angeles-based Oaktree Capital, an Evergrande creditor, seized a 2.2-million-square-foot Hong Kong property, valued at $1 billion, where Evergrande’s founder and chairman had once planned to build a mansion.

TREND FORECAST: Evergrande’s woes have worried the global investment community, fearing that the company’s implosion could spread through the world’s second-largest economy, which depends on real estate for as much as 30 percent of its GDP.

Under the direction of regulators, Evergrande is prioritizing payments owed to suppliers and migrant workers to quell any prospect of social unrest.

The company also is being pressured to complete homes for the 1.6 million buyers who have already made deposits and must repay retail investors who bought the bonds it sold to finance its building projects.

Evergrande’s liabilities exceed $300 billion and include more than $19 billion owed to foreign bondholders.

Apple’s fourth-quarter revenue reached $124 billion, up 11 percent year over year and its smallest annual quarterly growth in more than a year.

Apple’s robust Chinese market is a reversal from January 2019, when the company cut its outlook for sales in the country.

At the time, iPhone sales in China were slumping as native Huawei Technologies was offering similar products that were cheaper at a time when the country’s economy was slowing.

Apple bounced back in late 2020 with the iPhone 12, sporting 5G capability, and last September when the 1Phone 13 debuted and led smartphone sales in the country that month, Counterpoint Research reported.

That momentum lasted through 2021’s fourth quarter, giving Apple 23 percent of the market, compared to 16 percent a year earlier, and the company’s first market-leading quarter in the country since the final three months of 2015.

Meanwhile, Huawei plummeted from a 23-percent market share to 7, crippled by U.S. sanctions on the company that severely hampered its ability to buy chips or use the Android operating system.

On 27 January, Apple reported its fourth-quarter profit to be up 20 percent, setting a record at $34.6 billion. Sales rose 11 percent in the Americas, still Apple’s strongest market with $51.5 billion in sales for the period.

TREND FORECAST: We note this article to continue to emphasize, that despite all the western nations concern of a China/Taiwan conflict and/or China being accused of genocide against the Uyghurs, the business of business is business.

And China, with 1.4 billion people and on track to overtake the United States as the world’s largest economy, major international corporations will not sacrifice the bottom line for political or human rights purposes.

TESLA GOES KARAOKE IN CHINA, BEIJING SINGING ITS OWN TUNE

Tesla sold out of karaoke mics in China that will be compatible with a software update after losing some ground to rivals in the country’s EV market.

The Wall Street Journal reported that the Austin-based company started selling the mics for $188 a pop. The idea is that occupants of the car will have the opportunity to turn their cabins into a karaoke bar that includes tracks and videos.

“I was quite jealous that BYD [a Chinese manufacturing company] owners get to sing karaoke in their cars,” Jiang Xin, 49, a Tesla owner, told the paper. (See “IN CHINA, DOMESTIC BRANDS OUTPACE WESTERN ICONS.”)

The Journal report pointed out how important karaoke singing is for the Chinese and said solo booths began popping up when bars were closed at the beginning of the COVID-19 outbreak. The paper, citing iiMedia Research Group, said about 500 million people in the country used online karaoke services last year.

The TeslaMic—which sells for about $188, is only available in China and includes a companion app called Leishi KTV, The Verge reported. It was sold out within an hour. The company is not producing any new vehicle models in 2022, and will delay its Cybertruck.

TREND FORECAST: China’s blossoming domestic consumer economy and its challenge to western brands strengthens our Top Trend 2021—the rise of China. As we have long said, the 21st century will belong to China because the business of China is business and the business of the U.S. is war.

Moreover, Americans, of which 70 percent are overweight and 42 percent obese and the majority of the population dressed down... the nation is no longer viewed as the “Exceptional’s” and has lost its status as the global trend setter.

With a population of 1.4 billion and nearly a half million middle class and the government emphasizing a dual circulation policy which emphasizes a self-sustaining economy, the nation’s focus will emphasize the “Chinese way” of elegance, grace, pop-culture and style.