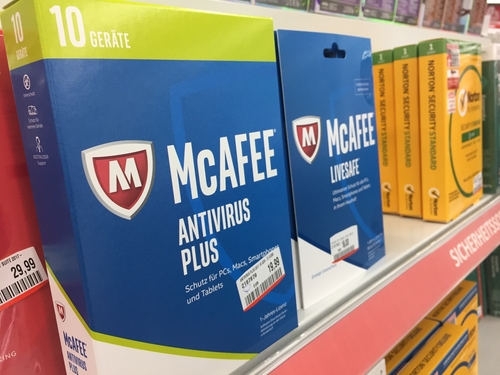 Cybersecurity company McAfee Corp. is being taken over by a consortium of investors led by private equity firms Advent International and Permira Advisors for $14 billion in one of this year’s largest leveraged buyouts.

The group will pay shareholders $26 a share for their McAfee stock, 21 percent above the company’s 4 November stock price.

The partners will put up $5.2 billion in cash for the deal and take on $9 billion in debt to fund the balance.

ADT, known for its expertise in home security, is buying Sunpro Solar, a major solar-panel installer, for $825 million, including $160 million in cash, 77.8 million shares of ADT stock, and the balance in borrowed money, The Wall Street Journal reported.

The newly-acquired business will be named ADT Solar.

Louisiana-based Sunpro works in 22 states and is among a number of fast-growing alternative-energy companies.

“We like the financials and, from a customer service perspective, [Sunpro has] the same DNA we have,” ADT CEO James DeVries told the WSJ.

ADT has been on a buying spree, acquiring Red Hawk Fire & Security in 2018 and Lifeshield, a do-it-yourself home security business, in 2019.

In 2016, ADT was bought by Apollo Global Management, a private equity firm, for $7 billion. In 2018, Apollo took ADT public again after merging it with two other security firms.

Since then, ADT’s market value has been lackluster, in part due to the difficulty of adding clients during the COVID era, the WSJ noted.

Video game designer Unity Software will pay $1.63 billion to buy the brand and tools developed by Weta Digital, the studio that created visual effects that defined the “Lord of the Rings” movie trilogy and television series “Game of Thrones.”

The tools enable animators to create realistic characters and objects and will help Unity enter and create spaces in what Facebook, now Meta, has dubbed “the metaverse,” a digital world in which people can congregate and interact using avatars.

The tools include Barbershop, which can put realistic mustaches on characters’ faces, and Lumberjack, which allows users to grow lifelike trees and plants.

These and other tools Weta has developed have been key to creating the metaverse so far, analysts told The Wall Street Journal.

As the new digital frontier, the metaverse will attract more and more entrepreneurs and investors.

Unity itself has made a series of acquisitions to expand its presence in the digital universe.

The company reported $286.3 million in third-quarter revenue, its 12th consecutive quarter of growth of 30 percent or more, and raised 2020 revenue projections to $1.1 billion.

Delivery service Doordash will trade $8 billion worth of its stock for ownership of European counterpart Wolt Enterprises, based in Helsinki, The Wall Street Journal said.

The purchase places Doordash, the most popular U.S. delivery app, in a better position to compete with Uber Eats in Europe, according to the WSJ.

Doordash’s share price jumped more than 20 percent on the news.

Doordash has expanded aggressively during the COVID lockdown, bringing people not only food from restaurants but also their orders placed on the websites of Walmart, Macy’s, and other retailers.

However, the company still lost a net $101 million in the quarter, compared to $43 million a year earlier.

Although it was the only U.S. delivery service to post a quarterly profit in 2020, eight-year-old Doordash, like virtually every other delivery service, has never posted an annual profit.

Prices for gasoline, diesel and jet fuel, vegetables, and factory raw materials all moved up, while beef and veal prices edged down.

Although goods are scarce due to materials shortages and supply-line kinks, U.S. consumers have not reined in their buying habits, bidding up prices for the items available.

Consumers spent $72.4 billion in October, 8 percent more this year than in the same month in 2020, the Financial Times reported, with gift cards, groceries, and toys seeing notable increases.

By buying Pretzels Inc., which has been owned by a division of private equity firm Peak Rock Capital, Hershey gains instant expertise in the business as well as manufacturing facilities, the WSJ noted.

Hershey’s has been moving aggressively into the fast-growing market for salty snacks, having bought Amplify Snack Brands, maker of Skinnypop popcorn, for $1.6 billion, and also Pirate’s Booty cheese puffs, both in 2018.

Two private equity groups are talking with CyrusOne, a Dallas firm that designs, builds, and operates data centers, about buying the company.

One group includes KKR and Global Infrastructure Partners; the other is led by Brookfield Asset Management.

CyrusOne’s market value is about $10.5 billion, according to The Wall Street Journal.

The firm owns more than 50 data centers in North and South America and Europe, serving about 1,000 corporate customers.

KKR, with $460 billion in assets under management, has “upped its ambitions in infrastructure investing,” according to the WSJ, raising almost $15 billion as of 30 September for a new global fund, more than twice the capital of its previous one, the WSJ noted.

Global Infrastructure Partners, one of the world’s largest infrastructure investors, holds $79 billion in assets and set a record in 2019 when it raised $22 billion for a new fund.

Brookfield, which already owns all or parts of 54 data centers, holds $110 billion in assets in utilities, transport, midstream, and data.