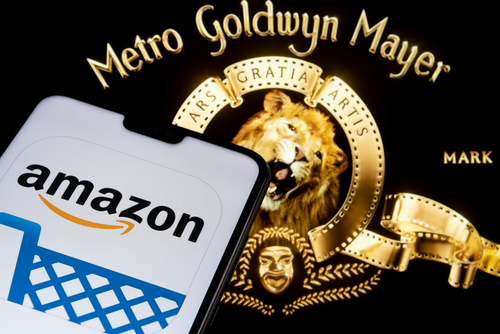 Europe’s antitrust regulators have approved Amazon’s proposed $6.5-billion purchase of the MGM movie studio “without condition,” giving Apple a vast library of classic movies to show on its Prime Video streaming channel as well as the ability to make new ones.

The deal would significantly improve Amazon's* ability to compete with Netflix and other major streaming services.

The U.S. Federal Trade Commission (FTC) has yet to rule on the proposal, although Amazon had set mid-March as a target approval date.

If the FTC fails to object by the deadline, Amazon likely will finalize the purchase.

The European Commission said the deal was permissible because the two companies are not overlapping in their services to consumers and MGM’s movies “cannot be considered as must-have.”

Amazon is among several tech companies that have come under sharper government scrutiny recently due to questions about their mammoth sizes and suspected anti-competitive practices.

In a separate case, the European Union has filed antitrust charges against Amazon. The case remains pending.

WALMART AIMS TO HIRE 50,000 BEFORE APRIL

Walmart has announced a goal of hiring another 50,000 U.S. workers before the end of the current quarter.

Some of the new workers will staff the company’s more than 5,000 stores across the country. Others will take up posts in Walmart’s new business areas, including advertising and health and wellness.

The chain wants to shed its image of a place where people are stuck in low-paid, dead-end jobs, The Wall Street Journal reported.

Walmart is refashioning its hiring and human resources practices to prioritize workers’ mental well-being and sharpen their digital skills as well as to assure employees they can build a satisfying, long-term career with the company, Donna Morris, Walmart’s chief people officer, said in a statement.

The company has raised starting wages to no less than $12 an hour and pays as much as $30 an hour for some jobs in some locales. It also has cut the time to approve new hires from a few weeks to as little as 24 hours, the WSJ said.

The average Walmart wage is now $16.40, according to the WSJ.

That might need to increase; Target has declared its intention to be the “wage leader in every market where it operates,” promising starting wages of $15 to $24 per hour.

Walmart already has about 1.6 million U.S. employees, about 1 percent of the country’s labor force. It added about 100,000 during the year ending 31 January, including 4,500 truck drivers and 5,500 pharmacists and pharmacy managers.

Overall U.S. retail sales will grow 6 to 8 percent this year, reaching $4.86 trillion, not including gasoline, vehicles, or restaurant sales, the National Retail Federation has predicted.

TREND FORECAST: Bidding for workers by offering higher wages and-or more extensive benefits may be necessary but it also threatens to fuel a wage-price spiral, in which wages and prices chase each other higher, a situation very difficult to end once it has begun.

Baring will merge with EQT’s Asian operations in a new entity that Baring head Jean Eric Salata will helm.

The deal pegs Baring’s value at a premium “at the lower end of the mid-teens” to its projected 2023 earnings, EQT said.

EQT is making its buy as private equity groups are targeting record fundraising for Asian investment funds and at a time when acquisitions in the region are drawing record prices.

Asia’s private equity market is growing twice as fast as the West’s, according to EQT CEO Christian Sinding.

“Hong Kong is going to continue to be a good place to operate from and we have a lot of talented people there,” he said.

About 15 percent of Baring’s investments are in China, with others in Australia, Japan, India, New Zealand, and South Korea.

Baring will generate €350 million to €375 million in management fees from client investors this year, EQT said.

EQT had €73.4 billion under management at the end of January, the Financial Times reported. Its share price rose 10 percent on news of the purchase.

In 2021, it bought Philadelphia-based Exeter Property Group for $1.9 billion.

*an earlier version of this article incorrectly specified Apple