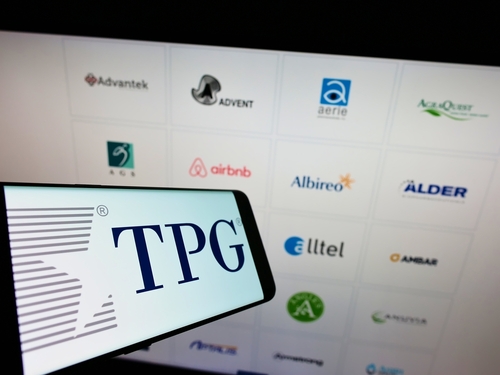 TPG Capital, a buyout specialist formerly named Texas Pacific Group, is hoping to collect as much as $877 million from an initial public stock offering that would value the firm as highly as $9 billion, the Financial Times reported.

TPG hopes to sell 28.3 million shares at between $28 and $31 each, tapping investors’ rising interest in caching their money with private equity firms.

Forty percent of the funds raised will be used to buy out existing outside investors; TPG will use the remaining 60 percent to expand into new markets and lines of business, the company’s prospectus said.

TPG will transform from a private partnership to a corporation within five years of the offering and will have a single class of stock, the company’s announcement said.

China Life Insurance, which paid $250 million in 2014 for a stake in the company, will sell 5.6 million shares in the IPO, TPG disclosed.

TPG has about $109 billion in assets, including holdings in Airbnb, Spotify, and Uber.

NEW YORK TIMES WILL BUY THE ATHLETIC FOR $550 MILLION

The New York Times Co. has agreed to a price of $550 million in cash to buy The Athletic, an online sports news venue with 1.2 million subscribers, the newspaper announced.

The purchase brings the Times’s current base of eight million subscribers closer to the paper’s goal of having 10 million paid readers by 2025.

“We are now in pursuit of a goal meaningfully larger than 10 million subscriptions,” Times CEO Meredith Levien in the announcement, adding that there is only “modest overlap” between the two news outlets’ subscribers.

The Athletic took in $65 million in revenue in its last operating year against a loss of $55 million.

The sports website will continue to eat into the Times’s profitability for the next three years while the company gradually builds ad revenues and broadens the base of subscribers, Levien said in a call with analysts.

The latest Times purchase follows its 2016 acquisition of The Wirecutter and Sweet Home product review sites and its $25-million 2020 takeover of Serial Productions.

Also in 2020, it bought Audm which allows subscribers to listen to audio recordings of news articles.

The Times had about $1 billion in cash in its pocket at the end of 2021’s third quarter, The New York Times reported.

ALD, the vehicle-leasing business owned by French international bank Société Générale, is buying competitor LeasePlan Corp. for €4.9 billion in cash and stock, equivalent to about $5.54 billion.

ALD leases to corporations; LeasePlan does as well but also deals with individuals.

The new entity will have about 3.5 million cars in the field and will be better able to take advantage of mobility trends such as car-sharing, the bank said.

The deal is part of a trend among European banks to seek profitability farther afield from their conventional businesses in an era of persistent negative interest rates.

The leasing business will grow to become an additional pillar of Société Générale’s profit structure, along with its retail, corporate, and investment banking, and  insurance business, CEO Frédéric Oudéa said in a statement quoted by The Wall Street Journal.

Take-Two Interactive, the publicly-traded maker of Grand Theft Auto and other video games, has agreed to buy competitor Zynga—which owns Farmville, CSR Racing, and a portfolio of other games, for $12.7 billion.

Take-Two will pay for the deal with cash and debt, including a $2.7-billion loan from JPMorgan, the company reported.

The deal values Zynga at $9.86 a share, 64 percent more than its 7 January closing price.

Zynga was boosted by 2020’s lockdown, at one point becoming Facebook’s most successful app developer, and now has concentrated on mobile gaming apps, an area in which Take-Two has lagged but that makes up half the estimated $180-billion global gaming market.

Take-Two now says mobile gaming will make up more than half its $6.1 billion in sales in its next fiscal year, up from 12 percent in the most recent year. Its purchase of Zynga eventually will add at least $500 million annually while creating cost savings of $100 million a year in the merger’s first two years.

The deal is the latest in a wave of takeovers in the gaming industry that saw Tencent buy Sumo Group and Turtle Rock Studios last year and Microsoft buy Bethesda, of Fallout and Doom fame, for $7.5 billion in 2020.

Neumann’s ambition is to create a well-known brand that will “shake up” the rental housing industry, a person familiar told the WSJ.

For example, the Neumann property Stacks on Main, in Nashville, Tenn., has a salt-water swimming pool, a dog park, and valet trash collection, the WSJ said.

Other Neumann properties are located in Atlanta, Ft. Lauderdale, Miami, and other “vibrant cities where a new generation of young people are choosing to live, the kind of cities that are redefining the future of living,” D.J. Mauch, a partner in Neumann’s family office, said in a WSJ interview.

Neumann and WeWork co-founder Miguel McKelvey raised about $10 billion in financing for their workspace firm, founded in 2010. Neumann collected about $500 million from selling his own stock and is estimated to now be worth about $1.6 billion.

As an investment, rental housing has outperformed most other vehicles since the COVID War began. Footloose professionals have moved from conventional hub cities such as New York and San Francisco to locales where housing was cheaper, such as Raleigh, N.C., and Boise, Id. (“Americans Still Fleeing Urban Centers,” 30 Mar 2021).

At the same time, soaring demand for houses sent home prices skyward, freezing out hundreds of thousands of buyers unable to win bidding wars or offer to pay for a house in cash (“Frenzied Housing Market Becomes Even More Intense,” 22 Jun 2021).

Unable to buy homes, those disappointed buyers turned to apartments, where rents have rocketed up, especially in the most popular markets.

In 2019, WeWork’s board of directors asked Neumann to resign as CEO, allegedly because of his drug use and erratic behavior.

In a 2019 WSJ profile, Neumann said he had ambitions to be prime minister of Israel, the world’s first trillionaire, and to establish WeWork on Mars.

While Neumann was WeWork’s CEO, he limited employees to four beers a day during working hours.

Corporations around the world raised a record $12.1 trillion through stock issues, bond sales, and by borrowing, 17 percent more than in 2020 and almost 25 percent above 2019’s level, according to data from analysis firm Refinitiv reported by the Financial Times.

Central banks’ flood of money to lend at rock-bottom interest rates created more and easier avenues for businesses to raise cash, especially in the U.S. where corporations raised more than $5 trillion.

Junk bonds also benefited from historic low borrowing rates and, in the U.S., guarantees by the U.S. Federal Reserve.

Seventeen percent more junk bonds were sold in 2021 than in the year before to nearly $650 billion; new loans to borrowers already deep in debt more than doubled to $614 billion, the FT reported.

Also in 2020, special-purpose acquisition companies (SPACs) raised more money than conventional IPOs, tallying $152 billion after a new slate of the blank-check companies came to market late in the year.

“We anticipate it will continue into next year,” Chris Blum, a leveraged buyout specialist with BNP Paribas, told the FT.

“Every year, you think markets will go down from this frantic pace, but it will still be robust,” he said.

TREND FORECAST: We maintain our forecast that when the U.S. Federal Reserve raises interest rates and pulls its bond-buying crutch out from under the lending industry, corporations will reacquaint themselves with economic reality.

When that happens, borrowing will drop off dramatically, especially among over-leveraged companies, businesses will enter a new era of financial restraint, and investors will turn away from “meme” stocks, SPACs, and other fads, and hew more closely to stocks that are tied to value.

While many suffered financially in 2021, it was a very good year for dealmaking and for the dealmakers, standing out even in a decade that's been big for wheeling-and-dealing.

So reports the Financial Times on 30 December. The value of 2021's various mergers and acquisitions amounted to more than $5.8 trillion, the highest in the four decades that records of such deals have been kept, and 54 percent higher than in 2019, before the COVID War.

Among the big deals were the $132 billion company resulting from WarnerMedia's merger with its rival Discovery, and Kansas City Southern's $31 billion acquisition by Canadian Pacific railway.

It was a very good year for investment banks, too; they racked up some $157 billion in fees, including $47 billion for advice on mergers and acquisitions.

Cheap money has made it all possible, and that has been a result of interest rates kept low by central banks, government help for companies affected by the COVID War, and thriving stock markets; inflation makes it possible to incur debt and pay it back with cheaper dollars; see "MARKET OVERVIEW" (14 Dec 2021).

The one example of such deals cited by FT is the proposed merger of Donald Trump's startup social media company with Digital World Acquisition Corp.

It's also cited as an example of how SPAC deals attract the attention of the U.S. Federal Trade Commission and its E.U. counterpart competition regulators, which are supposed to limit how much economic activity can be under the control of just a few mega-corporations.

TREND FORECAST: All this activity could be the boom before the bust—see "MARKET BUST COMING? CORPORATE CHIEFS CASHING OUT" (14 Dec 2021)—because, as we've noted before, all this cheap money is the result of artificially low interest rates and "stimulus" programs, like the Federal Reserve's bond-buying scheme—see "PONZI 2.0: FED BUYING CORPORATE BONDS" (16 Jun 2020)—and when interest rates eventually rise, the economy and the equity markets will take a hit. That, however, will drive up the prices of precious metals and cryptocurrencies.

TRENDPOST: For more on how the economy is manipulated, see Gregory Mannarino's article, "U.S. STOCK MARKET: A CRIME IN PROGRESS" (16 Jun 2020).