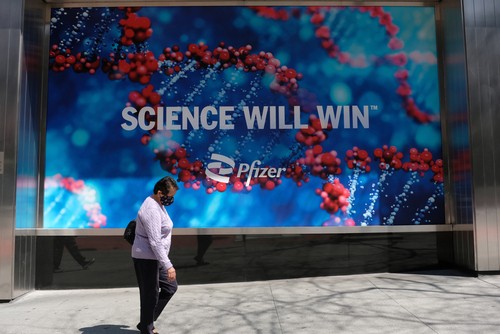 Flush with billions in cash from the success of its COVID vaccine, Pfizer Inc. has agreed to pay $6.7 billion to buy drug maker Arena Pharmaceuticals, which specializes in medications for inflammatory bowel conditions.

Arena’s market value had slumped 30 percent this year before Pfizer’s takeover was announced.

Etrasimod, Arena’s drugs for ulcerative colitis, will report clinical trial results next quarter and, if successful, is projected to bank $900 million in annual sales by 2026, according to The Wall Street Journal.

Xeljanz, Pfizer’s drug for the two conditions, notched $2.44 billion in worldwide sales in 2020.

Pfizer had $27.7 billion in liquidity as of October, analysts reported, with revenue more than doubling in this year’s third quarter as the company’s COVID vaccine brought in $13 billion.

With so much buying power, Pfizer is likely to make other acquisitions.

Pfizer has the assets to do as much as $132 billion in takeovers through 2022, analyst Evan Seigerman at BMO Capital Markets wrote in a 12 December research note.

“Pfizer is making good use of the deluge of cash,” he noted.

Arena developed Belviq, an anti-obesity drug, that failed in the marketplace. It then sold rights to the drug to a rival and redirected its research efforts to address inflammatory conditions.

Most of the properties are in Atlanta, Austin, Denver, Orlando, and Phoenix, cities that have boomed as remote workers have migrated to Sunbelt cities cheaper than New York, San Francisco, and other conventional business centers.

The tight U.S. housing market has blocked many potential home buyers from owning a house, pushing up demand for apartments and spiking rental rates, a shift that has drawn billions of dollars in new investment into rental housing.

Affiliates of Blackstone Real Estate will pay $24.25 a share, about 124 percent above the trust’s 15 September closing price, the day before Bloomberg reported the trust was looking for a buyer.

As part of the deal, Bluerock will spin off its single-family rental business to Bluerock Homes Trust Inc., a newly formed real estate investment trust that will hold interests in about 3,400 houses across the U.S.

Blackstone also is in discussions with Brookfield Asset Management and Nuveen to buy 8 Spruce Street in Manhattan, an 899-unit luxury apartment tower valued at about $930 million.

TRENDPOST: Among the horde of investors snapping up rental properties this year, Blackstone has been among the most aggressive.

As we wrote in “Rents Soar as Investors Buy Properties and Raise Rates” (14 Sep 2021), with investment companies grabbing the most desirable houses in the most competitive markets, tens of thousands of houses will be off the market for years to come that otherwise would be available to individuals and families as wealth-building investments in the American Dream.

That lack will limit wealth creation among younger generations, which already are burdened by student debt and a precarious job market.

These limitations will foment political movements that call for debt relief, guaranteed incomes, and other social proposals.

Veoneer, a Swedish maker of car parts, will be taken over by SSW Partners, a U.S.-based investment firm that has never done a deal and has no dedicated fund for buying companies.

Chip maker Qualcomm, with $200 billion in market capitalization, has guaranteed that Veoneer’s shareholders will be paid when the deal closes, giving them an 85-percent premium to the stock’s pre-deal price.

SSW are the initials of the firm’s founders, which give it a stellar pedigree: Eric Schwartz is a former Goldman Sachs executive, Joshua Steiner co-founded the private equity firm Quadrangle Group, and Antonio Weiss was Lazard’s head of investment banking.

Qualcomm had wanted to buy Veoneer’s autonomous vehicle software division, but the Swedish firm wanted to be sold in whole and had entered discussions with car parts distributor Magna International.

Qualcomm then entered an agreement with newly-formed SSW, which outbid Magna for all of Veoneer’s stock.

After selling Veoneer’s autonomous driving division to Qualcomm, SSW will sell the remainder of Veoneer to the highest bidder, the new firm has said.

However, “Qualcomm and SSW investors agreed that Qualcomm would lead and control negotiations with Veoneer,” Veoneer stated in a proxy statement.

Also, “Qualcomm has agreed to take all actions necessary to cause SSW…to have available sufficient funds to satisfy the required merger payments when due and payable,” a regulatory filing says.

Through their past dealings, SSW’s founders have extensive ties to the global wealth community, including executives involved with Anheuser-Busch, 3G Capital, German conglomerate JAB, and U.S. billionaire Michael Bloomberg.

Instead of raising a fund and then looking for deals, SSW prefers to find a deal and then call on possible funders to structure a purchase, the Financial Times said.

The deal extends Oracle cofounder Larry Ellison’s longstanding willingness to buy his way into new markets. Mr. Ellison built Oracle into a major power in business software in part through a long list of acquisitions over the decades.”

TREND FORECAST: We note the WSJ language to further illustrate how the Bigs buy their way into new markets, and get bigger and how companies like Oracle have a “long list of acquisitions over the decades.” Thus, the pure example of how the few now own the most.

As the gap between the rich and poor widen, there will be political movements to reinstate and/or impose new anti-trust legislation to break up the Bigs.