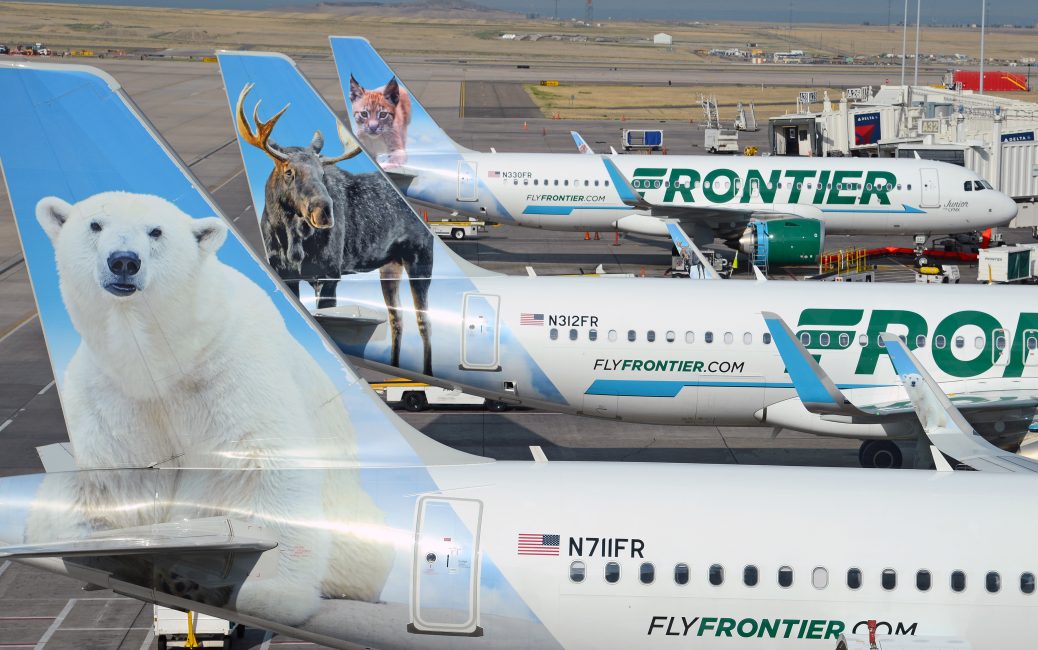 The merger will “create America’s most competitive ultra-low fare airline,” the companies said in a statement, and help make the new entity a stronger player in the post-COVID air travel revival.

Frontier and Spirit held 5.4 percent of the U.S. air passenger market in 2019, while the “big four” of American, Delta, Southwest, and United shared 73.9 percent of U.S. ticket revenues.

The two carriers compete in about 520 of their combined 2,800 routes, aviation data firm Cirium said.

The new entity plans 10,000 new jobs by 2026 with no current employees at either airline being fired or furloughed, the statement said, adding that it expects to “maintain all of our current bases and grow them over time.”

Denver-based Frontier will hold a 51.5% share of the new company; Spirit will own 48.5 percent.

Spirit’s shareholders will receive 1.9126 shares of Frontier plus $2.13 in cash for each share they own.

That works out to a value of $25.83 per share of Spirit, 19 percent more than the stock’s closing price on 4 February.

The new company’s board will be chaired by Bill Franke, Frontier’s current chair, who will lead a committee that will determine the name and headquarters of the merged carrier after the deal closes some time in the second half of this year.

Franke chaired Spirit’s board until 2013 and moved to Frontier shortly after.

The deal marks the first merger of a major U.S. airline since Alaska Airlines was combined with Virgin America in 2016, but may presage more.

Now airlines are competing fiercely for workers as well as price-conscious domestic leisure travelers, a market that Frontier and Spirit held during the COVID era and helped them survive the economic crisis in better condition than many larger carriers.

However, the merger may face an unfriendly regulator.

In September, the U.S. justice department asked a court to block the so-called “Northeast Alliance” between American Airlines and JetBlue, the airlines’ plan to share coding and airline gates, coordinate routes, and combine their frequent flier programs.

Although the transportation department approved the project, the justice department called it a “de facto merger” that would decrease competition, boost ticket prices, and give American too much influence over the smaller JetBlue.

The alliance is continuing while the justice department lawsuit progresses.

“I think this [Frontier-Spirit] deal can get done, but that doesn’t mean there isn’t going to be a lot of regulatory questions that have to get answered,” Helane Becker, airline analyst at research firm Cowen told CNBC.

After surviving the COVID War on $25 billion in U.S. government grants and loans, the air passenger industry has struggled back toward profitability.

The U.S. passenger count on 7 February this year was 1.6 million, compared to 864 million last year. The number is still far short of the same date in 2019, when 2.1 million people flew.

TREND FORECAST: The COVID War has shrunk business travel, which has been major airlines’ key to profits, as we have detailed in “Bid Farewell to the Business Travel Economy” (29 Sep 2020) and Europe’s Banks Permanently Slash Business Travel” (4 May 2021), and other articles.

And until and/or if governments lift COVID Vax Passport requirements and strict testing policies, a sizable sector of the population will not travel to foreign nations. This in turn will put downward pressure on the travel, convention, tradeshow, tourism and hospitality sectors.

Thanks to soaring home values during the COVID era, Americans have an estimated $25 trillion or more in home equity, according to U.S. Federal Reserve data.

At least 42 percent of U.S. homes owned by individuals are considered “equity rich,” meaning that the houses hold more equity than is still owed on their mortgages, compared to just 30.2 percent a year ago, ATTOM Data Solutions reported.

To make use of that wealth, homeowners usually have to sell their houses or borrow against them.

Now private equity companies are funding firms such as EquiFi, Hometap, Unison, and Point that offer an alternative: they pay homeowners cash to buy a portion of their equity in return for a percentage .

Homeowners get cash without debt; investors effectively buy a savings account that they assume will rise in value along with future home prices.

"Our pitch to [investors] is, you've got a homeowner, they already own the home,” David Shapiro, CEO of EquiFi, said in comments quoted by BI.

“You're not disrupting the homeownership" by buying single-family homes to rent to people shut out of the mortgage market, he added. "You're getting access to home-price appreciation in a very stable product that has a lot of protection.”

Buying home equity offers "a much bigger market” than buying single-family homes to rent out, George Kenny, a Tangent Capital Partners managing director and an advisor to EquiFi, told BI.

"I think that it's going to be the next huge opportunity within residential real estate for institutional capital," he added. "That's why you're seeing all this venture and private-equity money invest in the platforms to get access to the product."

As we have forecast, the property market will contract when the U.S. Federal Reserve raises interest rates to 1.5 percent and above. As the real estate market declines in value, equity firms will begin to again ramp up home buying when they estimate prices have bottomed out and interest rates will contract.

CARLYLE GROUP PLANS NEW ROUND OF MERGERS AND ACQUISITIONS

“We are looking for strategic adjacencies,” he said, “new markets we can scale in, and businesses that are additive to our fee-related earnings.”

Targeted areas include “credit and investment solutions,” he added.

Unlike many other private equity firms, Carlyle has been slow to diversify.

Apollo Global Management, Ares Management, Blackstone Group, and KKR are among asset managers that have already broadened their investment bases into insurance and debt instruments, among other areas, in recent years.

The private equity industry has seen a surge in M&A deals recently, with some companies selling out to larger competitors or scaling up to be listed on public exchanges as investors continue to pour money into private equity companies.

Blackstone Inc. and The Carlyle Group may make a joint bid, while Sweden’s EQT and the private Struengmann family may partner to make an offer, persons familiar said to the FT.

Sandoz, which generates about 20 percent of Novartis’s revenue, could be worth as much as $30 billion, an unnamed company executive told the FT.

Discussions are still preliminary and no formal offers have been made, according to the FT’s sources.

Novartis also may decide to spin off Sandoz as a separate entity instead of selling it to private equity firms, the sources said.

Novartis has been shifting its focus to drugs that generate higher revenue for smaller volumes, which is a drug-industry trend, the FT noted.

The New York Times has paid a price in “the low seven figures” to acquire the word game Wordle, which has become a sensation in recent weeks.

Software engineer Josh Wardle created the simple daily game for his girlfriend in October. By 1 November, it had attracted 90 players. Now “millions” are playing it, the NYT said in announcing its purchase.

The game is free to players and carries no advertising but the NYT did not commit to continuing that policy.

The new purchase follows the NYT’s $550-million January acquisition of The Athletic, an online sports news website with 1.2 million subscribers.

The Times has set a goal of attracting 10 million subscribers and “becoming the essential subscription for every English-speaking person seeking to understand and engage with the world,” the company said in its announcement.

Sony has bought video game developer Bungie, known for the iconic Halo and Destiny series, for $3.6 billion as part of a wave of consolidation that is washing over the gaming industry as the meta universe expands.

“Both Bungie and [Sony] believe that game worlds are only the beginning of what our IP will become,” Bungie CEO Peter Parsons said in a statement announcing the union.

“Our original universes have immense potential,” he added, “and, with [Sony’s] support, we will propel Bungie into becoming a global multimedia entertainment company.”

Bungie will continue to operate as an independent company, Parsons said.

Sony’s share price hopped up 4.5 percent on the news.

About two weeks ago, X-Box maker Microsoft made its costliest-ever acquisition, paying $75 billion to subsume Activision Blizzard, maker of Call of Duty and Candy Crush, among other favorite distractions.

Sony’s purchase is, in part, defensive, according to independent industry analyst Pelham Smithers: if Microsoft were to make Call of Duty available exclusively on X-Box, Sony could counter by restricting Halo and Destiny to Playstation.

Last month, Take-Two Interactive traded $12.7 billion for ownership of Zynga, which lists Farmville and Words with Friends, among others, in its gaming catalog.