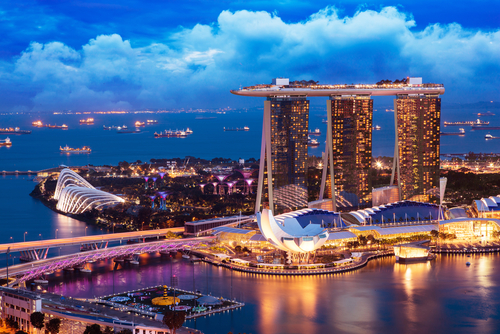 China has outlawed cryptocurrencies (“CHINA SEES CRYPTOS AS EXISTENTIAL THREAT,” 28 Sep 2021); U.S. regulators dither; and Hong Kong and South Korea have become hostile to them and have banned or restricted crypto dealings.

In contrast, Singapore has laid the legal and regulatory groundwork to become crypto’s new home in Asia.

Applicants include Coinbase, Crypto.com, and Gemini, among others; Binance, effectively banned in Lithuania, Italy, and Japan and under attack in the U.K. (“More Troubles for Binance,” 20 July, 2021), also has found a haven in Singapore.

Singapore has granted waivers to many companies that have applied, meaning that they can offer services to individual and institutional investors while they await approval.

Singapore’s 5.5 million people have relied on financial services to grow their $344-billion economy. The country’s leaders see crypto as the next step.

“Singapore thinks long term about this stuff,” one crypto founder said to the Financial Times.

“Years ago, I went to hear [Ethereum’s cofounder] speak and in my row there were three people from the Monetary Authority of Singapore (MAS) painstakingly taking notes,” the founder recalled.

“They show they are open to innovation—businesses and people taking financial risks,” he noted.

Singapore’s banks also have signed onto the crypto movement. The MAS granted approval in August to the brokerage division of DBS, the country’s biggest bank, to provide crypto trades and other services to clients.

Singapore itself has become a crypto player, with its sovereign wealth fund investing in the Hong Kong parent of crypto exchange OSL; Temasek, the government’s investment company, has bought into Binance Asia, which is based on the island.

The moves are part of Singapore’s plan to emerge as Asia’s financial center and then a key global player, according to the FT.

Singapore’s chief rival for that role is Japan, whose Financial Services Agency (FSA) was the world’s first to recognize crypto as legal, and in 2017, became the first to define in law what a crypto exchange is.

Still, Japan is less comfortable with digital currencies than Singapore is, the FT noted.

The Tokyo-based Mt. Gox exchange once handled 80 percent of the world’s Bitcoin trades but has since collapsed; Coincheck’s Japanese customers were victims of a $500-million theft of XEM coins.

The FSA is “desperate to present Japan as the pre-eminent hub of financial innovation and a welcoming face for crypto is a good way to do that,” one crypto exchange director said to the FT.

“At the same time, they can see how significant the risks are because of just how many young Japanese are invested in this now,” the executive added.

Governments’ crucial challenge is to balance the threat posed by cryptos’ potential for chaos against the benefits of the financial activities it creates, Cathie Wood, founder of Ark Invest and a crypto enthusiast, said in comments cited by the FT.

“Countries understand that if they want to attract innovation, they need friendly regulatory regimes working alongside the innovators as opposed to at cross-purposes,” she said.