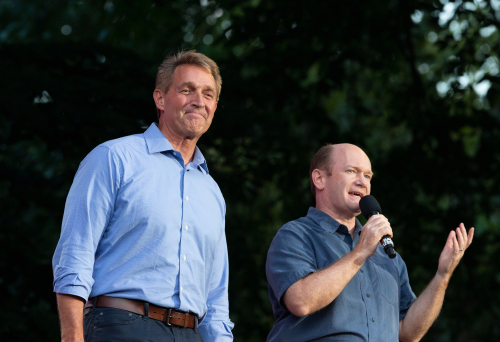 Sen. Chris Coons, D-Del., hinted last Sunday that the U.S. should consider deploying troops to Ukraine to beat back the Russian invasion and stop Russian President Vladimir Putin from achieving his objectives.

“The American people cannot turn away from this tragedy in Ukraine,” he told CBS News. “I think the history of the 21st century turns on how fiercely we defend freedom in Ukraine and that Putin will only stop when we stop him.”

Coons, like other war hawks in the Senate, has framed the fight in Ukraine as though it is a fight for freedom and democracy. Many foreign observers see the conflict as a border war and point to Moscow's earlier statements about NATO's expansion in its backyard.

RT.com reported that Coons is known to have an extremely close relationship with President Joe Biden and worked as an intern in his Senate office back in the 1990s. He was elected in 2010 to fill Biden’s seat, the report said. The report pointed out that Politico once referred to Coons as “the Biden whisperer.”

Earlier this month, Coons addressed the University of Michigan and said the Biden White House should “come to a common position about when we are willing to go the next step and to send not just arms but troops to the aid in defense of Ukraine…If the answer is never that we are inviting another level of escalation in brutality by Putin.”

Jen Psaki, the White House press secretary, called Coons, who sits on the Foreign Affairs Committee, a “close friend of the president’s and the administration” but “we just respectfully disagree with his proposal.”

"The president has no plans to send troops to fight a war with Russia. He doesn't think that's in our national security interests," she said.

Coons tried to clarify his comments during an interview with France 24 English and said he is not calling for U.S. troops to “be sent into Ukraine.”

“When I said that Putin will only stop when we stop him, I meant we the West, we the nations that have come to Ukraine's aid ... I am not calling for U.S. troops to be sent into Ukraine, but I am calling for the West to be clear-eyed about how hard and how long this conflict might be,” he said.

Rep. Adam Kinzinger, R-Il., has been one of the loudest members in the House to call on the U.S. to fight Russia over Ukraine. He endorsed a no-fly zone, which the president refused, and said in a tweet on Sunday that Ukraine “must-win.”

“Our generations are getting a lesson that our grandparents understood: the only way to defeat evil is to destroy it,” he tweeted.

TRENDPOST: Since the beginning of the Ukraine War, the Biden administration has, according to Moscow, refused to negotiate with Russia over its security concerns.

We forecast that Washington, with the assistance of the mainstream corporate media will continue to send feelers out to get an idea of the public's tolerance of war with Russia.

It will take some convincing because many Americans understand that the U.S. military has not won a single war since WWII, and even lost to the Taliban in Afghanistan and will not want to confront Russia.