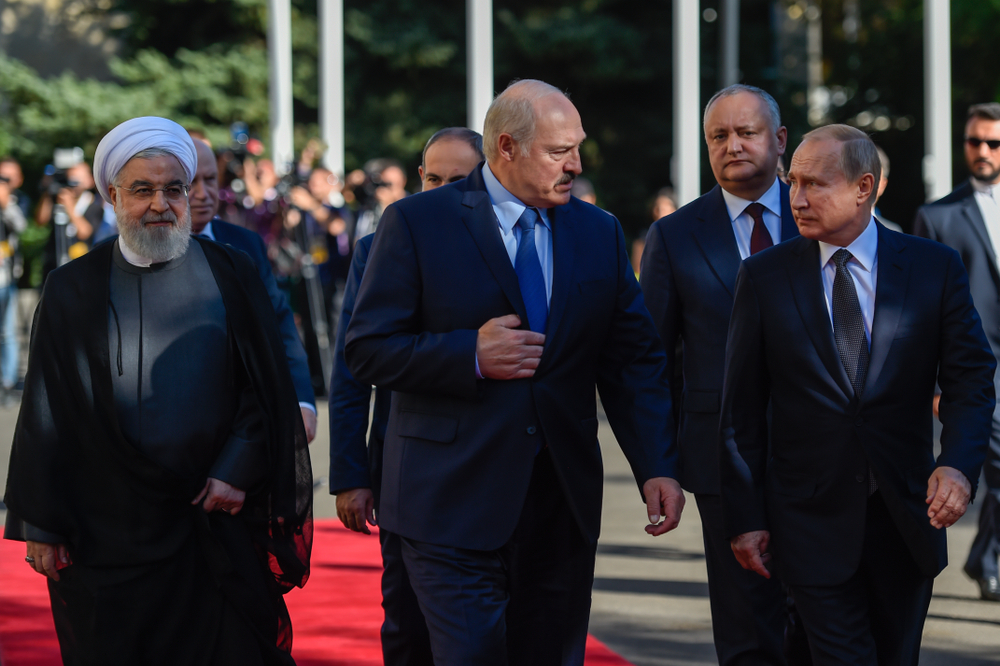 They are nearer than you think

The United States is now insisting that Russian President Vladimir Putin should be put on trial for “war crimes” committed in Ukraine. As Putin is still insisting that he will attend the upcoming G20 summit in November on the island of Bali, Indonesia, it will be a great opportunity to have U.S. Marshals snatch him from the stage and whisk him off to a federal courthouse in Virginia for justice to be served. Or a form of justice anyway, since the United States has no actual jurisdiction over where Putin’s alleged crimes might have taken place and it will be impossible to prove that he actually ordered anyone to carry out so-called “crimes against humanity.” We’ll see how it all works out.

Indeed, there is no other phrase that has been more misunderstood and generally abused of late than “war crimes” or “war criminals.” It belongs with several other labels, including “weapons of mass destruction” and “crimes against humanity” that are used to indicate an adversary has crossed a red line and is so deplorable that anything that is done to him either during actual fighting or in the aftermath is completely acceptable.

Going back to Greek and Roman times it has always been understood that even in wartime there are certain activities that are unacceptable, but the attempted definition and codification of “war crimes” as a concept is largely a twentieth century creation used to inflict additional punishment on the losers after the fighting is over.

The Treaty of Versailles that ended the First World War punished Germany far beyond what most would consider reasonable, largely because the victorious powers were able to do so without any consequences until the next war began. Likewise, the linked concepts of war crimes and crimes against humanity came largely out of the post-Second World War Nuremberg Trials, which shaped the legal arguments around alleged German behavior, not that of the allies.

The Second World War certainly included atrocities of various kinds on both sides, but the Anglo-American deliberate bombing of German cities has to stand out as particularly disproportionate. Forty-two thousand mostly civilians died in Hamburg in the 1943 firebombing and the bombing of Dresden in 1945, at a point when Germany was on the verge of defeat, was remarkable in that the city was not a military target and was full of refugees from the east. At least 200,000 civilians died.

Judge Andrew Napolitano has suggested that the greatest war crime in history, if one makes a case based on unnecessary human suffering, was President Harry Truman’s nuclear bombing of Hiroshima and Nagasaki, which almost certainly killed more than 200,000 mostly civilians, when Japan was preparing to surrender. As Truman was on the side that won the war and controlled the prosecution process, there were no legal consequences or punishment relating to his decision, though critics since 1945 have sometimes decried the first use of nuclear weapons.

If killing civilians unnecessarily is the standard definition of a war crime, then America’s most recent five presidents have been war criminals. In other words, historically speaking, accusations of war crimes, which have no real meaning in law and are both infinitely elastic and subject to interpretation, have often depended on which side of the fence one is standing on when the war ends.

And it gets more complicated than that, given the politics of what is sometimes referred to as the rules based international order, which in theory arose from the ashes of World War Two. The new world order was US-centric from the start, with the United Nations (UN) situated in New York City, the World Bank in Washington, and the dollar as the world’s reserve currency.

At the UN, American primacy was reinforced through the creation of a Security Council, which alone has the power to authorize military action against a rogue state. The Security Council had five permanent members, each of whom was armed with a veto, meaning that no effective action against them could ever take place no matter what they had done. And so it has played out, with the U.S. plus China, Russia, Britain and France being effectively immune from censure authorizing military action by the United Nations.

It is of particular interest to observe that the International Criminal Court (ICC) in the Hague was set up to deal with “war crimes and crimes against humanity” that were otherwise ignored. Neither the U.S., nor the Russians nor the Israelis recognize the authority of the court and the U.S. has stated that no ICC investigator will be allowed entry into the United States. Given that, it becomes possible to witness how the whole farce of war crimes and other violations of the new world order have played out in practice.

Currently the U.S. and its allies are waging economic warfare on Russia without an actual declaration of war, to include an avalanche of sanctions plus completely illegal confiscations of the property of Russian citizens. It is also blocking Moscow from the use of the international monetary conventions and systems that it has had access to.

The clearly stated intention is to destroy the Russian economy due to Russia having been charged by the U.S. government with the commission of what it is calling war crimes in its invasion of Ukraine. Vladimir Putin argues in turn that Ukraine’s apparent intention to join NATO, which is a hostile military alliance directed against Russia, is a direct threat to his country and is already manifesting itself in military action undertaken against breakaway parts of Ukraine which are largely inhabited by Russian speakers and ethnics.

There are other issues, but those are the most important. It should also be noted that the issues themselves were at least somewhat negotiable prior to the outbreak of fighting, which Putin sought to do but Joe Biden and NATO were not interested in. So ultimately the war, from a third-party point of view, is pitting a Russian vital interest against what really amounts to no genuine interest at all for NATO and the U.S., apart from goading the Russian bear and removing its government as a way to prevent against any change in the international order.

Since objective reality has no place in United States foreign policy, it is interesting to look at how the U.S. sees itself and how it regards other countries that are doing what Russia is doing or worse. When it comes to its own self-perception, America’s so-called leaders believe that their global leadership role is one by right and they can do no wrong by virtue of a quality referred to as “American exceptionalism.” That is of course a mythical attribute created to permit the United States to get away with mass murder and regime change without any consequences.

A principal beneficiary of American financial and political largesse is, of course, Israel, which consists not only of people “chosen” by Yahweh but also by the media, the United States Senate, House of Representatives and the White House. A comparison of what Russia is doing that is being condemned by Washington versus what both what the U.S. and Israel have been able to get away with might be considered to be in order.

Russia has invaded Ukraine after months of warnings that the status quo was untenable in national security terms, largely due to intentionally fruitless negotiations with stonewalling United States representatives and NATO. Israel, widely acknowledged to be an apartheid state, is currently bombing Syria on an almost daily basis, unnoticed by the U.S. media and the Biden Administration.

It in the past has attacked all its neighbors, including the renowned Seven Days War in June 1967 which was a surprise attack staged against Egypt, Syria and Jordan. Subsequent to that war, Israel occupied nearly all of what had been Palestine. It also seized the Golan Heights belonging to Syria and has recently received consent from Washington to illegally annex Arab East Jerusalem as a part of Israel, making the whole of the city Israel’s capital. The Golan Heights have also recently been annexed with Washington’s approval and there are 700,000 heavily armed and violent Jewish settlers now sitting in 261 settlements on stolen Palestinian land on the West Bank.

And what has the United States and its allies done to dissuade Israel? Well, nothing. One rule for Israel and the U.S. and another quite different Washington dictated “rules based” system for everyone else, most particularly if one is Russian.

In fact, the more belligerently Israel behaves, the more it gets in terms of U.S. taxpayer money and made-in-USA weapons. Israel has also been the favored destination for traveling congress-critters of late because it is an election year and Jewish donors are being hotly pursued. Recently, a large group of Democrats was departing just before former Vice President Mike Pence arrived in Tel Aviv on Miriam Adelson’s private jet so he could kiss Prime Minister Naftali Bennett’s ring and also spend some quality time with Benjamin Netanyahu.

Ironically, while Joe Biden was turning the screws on Russia, the Congress was showering gifts on Israel above and beyond the billions of dollars in “aid” that the wealthy Jewish state already receives. Alison Weir of If Americans Knew has examined the recently signed pork laden 2022 federal government spending bill and has identified numerous line-item instances of money going directly to Israel or in support of causes that benefit Israel in some fashion. She estimates that Israel’s economy, which is able to support both free medical care and higher education, now benefits to the tune of $22 million per day from the United States taxpayer, for a total of $8 billion per year, and the number might actually be much higher.

And there are other sources of income indirectly funded by the U.S. Treasury, most notably the ability of Israel-focused charities to contribute tax exempt money to Israeli foundations and groups. Many of the “charities” are essentially fraudulent, funding the illegal settlements, domestic terrorism and other anti-Palestinian activities. Every artifice is used by some Jewish groups and billionaire donors to keep the U.S. dollars flowing to Israel while no one of any significance in the federal government complains about the double standard when one compares Israel to Russia. And the Zionist controlled media are completely silent.

The hypocrisy that pervades United States foreign policy is difficult to ignore, but Washington has successfully manipulated its financial instruments to keep its remaining friends and allies in line. Whether that will survive the inevitable pushback coming from Russia, China and a number of non-aligned nations remains to be seen. At a minimum, the Cold War alignment that was broken in 1991 and which seems to again be taking shape around the Ukraine issue appears to have exceeded its expiry date. Ukraine might indeed wind up doing severe damage to the Russian economy, but it seems plausible that it will also bring with it the long overdue demise of American hegemonistic fantasies and NATO.

Philip M. Giraldi, Ph.D., is Executive Director of the Council for the National Interest, a 501(c)3 tax deductible educational foundation (Federal ID Number #52-1739023) that seeks a more interests-based U.S. foreign policy in the Middle East. Website is council for the national interest.org, address is P.O. Box 2157, Purcellville VA 20134 and its email is inform@cnionline.org.