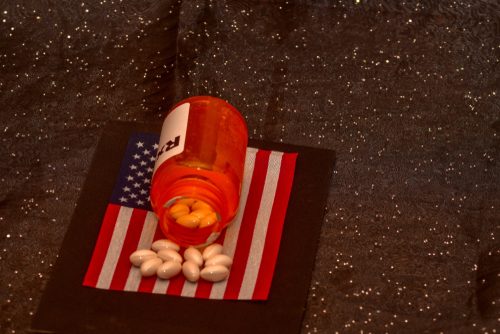 As we had forecast, according to the Centers for Disease Control and Prevention, annual U.S. deaths from drug overdoses are on track to eclipse 2020's numbers, which had exceeded previous records.

The number has already topped 100,000 for the 12 month period ending 30 April, and that is an increase of 29 percent over the same period a year earlier.

About 75 percent of the fatal overdoses during that period are opioid-related. The drug fentanyl (a synthetic opioid that can be 50 times more powerful than heroin or morphine) has been driving up the numbers since about 2014, but the current surge is laid at the feet of COVID-19, via the isolation, anxiety and depression imposed by lockdowns and their impact on lives and livelihoods.

Adding to that is the proliferation of illicit fentanyl (often produced, according to the Drug Enforcement Administration, by Mexican cartels using ingredients from China) added to other drugs (whether illicit heroin or bootleg replicas of prescription drugs), often unbeknownst to the consumer; see "FENTANYL: A KILLER OPIOID" (20 Apr 2021) and "COVID WAR = FATAL DRUG OVERDOSES" (20 Jul 2021).

TRENDPOST: As we noted in "THE OPIOID WARS" (22 Oct 2019), it all started when OxyContin (a timed-release version of the opioid analgesic oxycodone) was approved by the FDA under Bill Clinton in 1996, and within two years prescriptions increased by 11 million.

A little history: Purdue Pharma promoted and marketed OxyContin via a sophisticated program that included all-expenses-paid conferences in California, Arizona and Florida for some 5000 doctors, nurses and pharmacists, as well as profiling to identify the most frequent (and sometimes least discriminate) prescribers of opioids; it also paid out $40 million in bonuses for increasing OxyContin sales. And it produced a promotional video in which a doctor claimed the drug "had no serious medical side effects."

The result was widespread dependency, far beyond medical necessity, among Americans who would otherwise not be using illicit drugs, and who, when access to prescription opioids was tightened by the government, found themselves turning to heroin and bootleg opioids.

CDC data shows overdose deaths up in 46 states plus Washington D.C., with Vermont—which has the highest COVID vaccination rate in the country—showing the greatest increase: 70 percent over the same period one year prior.

One proposal to alleviate the problem is the creation of legalized sites where illegal drugs could be consumed with supervision, so that overdoses can be dealt with by trained personnel with access to overdose-reversal drugs. But as The Wall Street Journal noted, such a concept "has proven difficult to launch," and at least one such site has been "blocked by a federal legal challenge launched during the Trump administration."

TREND FORECAST: Such schemes are couched in terms of promoting "harm reduction." Look for similar proposals employing that term; President Biden has even said that promoting harm reduction is part of his administration's approach to combating the crisis.

TRENDPOST EXTRA: The mental damage of the COVID War keeps spreading. On 17 November, an Oregon middle school which, having resumed in-person classes after a year of at-home learning because of COVID-19, is now closing down again because student behavior is out of control.

A year of closures, quarantines and isolation has so suppressed students' socialization skills that brawls and other "disruptive behaviors" are running rampant, and the school cannot provide "the necessary social-emotional supports" and "safety protocols" for education to resume.

What's this have to do with people turning to opioids and overdosing? Some people turn to drugs, others “act out.” Both are examples of the devastating toll taken by the COVID War, from all the stresses whose collective negative impact far outweighs the damage done by the virus itself.

Both prove two maxims: one, that the cure is often worse than the disease, and the other, as Gerald Celente has often said, "When people lose everything and have nothing left to lose, they lose it."