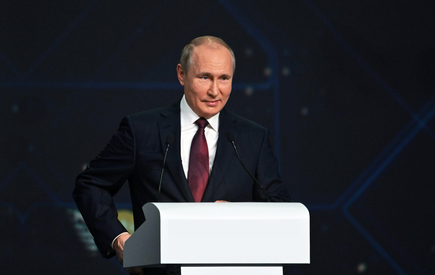 Russia’s economy has been harmed less than expected by Western sanctions that were imposed as punishment for its attack on Ukraine, the International Monetary Fund (IMF) noted in its new quarterly economic outlook report.

Russian exports, including oil, “are holding up better than expected,” the report said.

“In addition, domestic demand is also showing some resilience, thanks to containment of the effect of the sanctions on the domestic financial sector and a lower-than-anticipated weakening of the labor market,” the IMF noted.

While it downgraded the economic outlook for other economies, as we report in “IMF Cuts Growth Forecast Again, Warns of Global Recession” in this issue, the IMF “upgraded its downgrade” for Russia’s performance this year.

In April, the agency foresaw Russia’s GDP contracting 8.5 percent this year; now it will shrink by just 6 percent, the IMF expects.

However, the IMF sees a deeper contraction for Russia next year, adjusting its forecast from a 2.3-percent shrinkage to a 3.5- percent contraction as sanctions work their way through the economy.

In more surprising news from Russia, on 22 July the country’s central bank cut its key interest rate from 9.5 percent to 8.0 on an improved growth forecast and slowing inflation—more indications that Western sanctions have failed to bite as hard as intended.

The cut also was made to ward off possible weakening of the ruble in the event of a global recession or “a strengthening of external trade and financial restrictions”—more sanctions—“which would have an inflationary effect,” the bank said in a statement.

When Western sanctions were imposed in February, the bank jacked its rate to 20 percent and the government banned capital from leaving the country.

With the latest rate cut, Russia’s ruble strengthened to about 58 to the dollar, compared to 150 to the buck immediately after it attacked Ukraine.

Since then, a series of rate cuts has brought interest levels down below their pre-invasion levels.

TRENDPOST: Western sanctions were doomed to fail, and will continue to, as long as China, India, and countries in Southeast Asia and Latin America refuse to adopt them.

While several major economies have suspended trade with Russia, enough countries have maintained trade relations to allow Russia to limp along, paying for its war while keeping a semblance of a domestic economy running.

TREND FORECAST: The longer the war persists, the more it will negatively affect consumers as prices will continue to rise due to shortages of commodities from the Russian/Ukraine region.

Go back to 26 February. President Joe Biden said there were only two options following Russia’s invasion of Ukraine: “Go to war with Russia, physical... or two make sure that a country that acts so contrary to international law pays a price for having done it.”

As inflation numbers grew, Biden declared that “There will be costs at home as we impose crippling sanctions in response to Putin's unprovoked war, but Americans can know this: the costs we are imposing on Putin and his cronies are far more devastating than the costs we are facing.”

Obviously, by the numbers, he was wrong, but the mainstream media ignores his inaccuracy and the price it has cost on people across the globe.

Not Long Ago, But Long Forgotten

Back in March, the White House announced a ban on Russian oil imports, joining Canada and the United Kingdom. Oil prices in the U.S. hit their highest levels since 2008.

Yet, there was little or no denunciation for his moronic statement, since gas prices were rising before the Ukraine War, and Biden, by his own admission, had made a bad situation worse.

Moreover, Moscow’s fight against the sanctions imposed upon it and the scores of businesses and financial institutions leaving the nation will prove positive for the nation.

It is part of Putin’s push against Globalization. Russia has bolstered itself over a long period of time—even prior to the Ukraine War—in preparation for the assault by creating as much of a self-sufficient economy as possible, in line with our Top 2022 Trend of Self-Sufficiency.