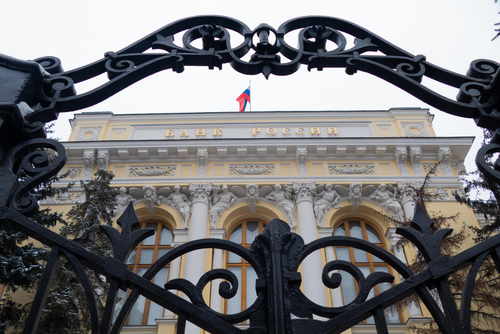 Russia’s central bank cut its interest rate by a half-point last week to 7.5 percent, its sixth cut after raising the rate to 20 percent immediately after the country invaded Ukraine.

However, the bank has little room to cut further and may begin to raise rates again if inflation takes hold, bank governor Elvira Nabiullina said in a statement announcing the new reduction.

“With this rate level, we estimate we are in a neutral monetary policy,” she said.  “We see that one-off deflationary forces are gradually losing their effect, while pro-inflationary risks are rising.”

“The scope for further reduction in the key [interest] rate has narrowed,” she warned.

The budget surplus with which Russia entered its war on Ukraine has shrunk and will likely sink into a deficit this month because Russia has cut gas deliveries to Europe through the Nord Stream 1 pipeline and lost that revenue stream, the Financial Times reported.

The central bank also pared back its prediction for Russia’s inflation rate this year; it had predicted 12 to 15 percent, but now sees the pace between 11 and 13 percent.

The economy will shrink by 4 to 6 percent in 2022, an improved forecast over the bank’s previous expectation of as much as 10 percent.

Inflation will ease back to 5 to 7 percent next year and reach the bank’s 5-percent target in 2024, it said.

TREND FORECAST: Western sanctions have failed to dissuade Vladimir Putin from continuing his war in Ukraine and, in some ways, have strengthened Russia’s economy.

However, that seems to have been only a short-term effect.

As Nabiullina said, the country’s budget surplus is disappearing and inflation is likely to rise.

Russia also is busy making new munitions, tanks, and other weapons of war, which diverts resources away from the commercial economy.

An internal Russian report obtained by Bloomberg shows no good long-term outcome for the country’s economy as a result of this war, with GDP not returning to prewar levels for several years.

We reported on this study in “Internal Russian Report Warns of War’s Long-Term Economic Damage” (13 Sep 2022).

The social and economic strains of war already are making Russia’s politicians restless; city councils in Moscow and St. Petersburg have publicly called on Vladimir Putin to resign.

However, as we have forecast, Europe and other nations will suffer from the sanctions and the Ukraine War more than Russia, as they turn away from globalization and move toward a self-sufficient economy. Indeed, prior to the Ukraine War Russia had bolstered itself over a long period of time in preparation for the assault by creating as much of a self-sufficient economy as possible... which is in line with our Top 2022 Trend of Self-Sufficiency.

And while there is doubt being expressed in the major media, politicians, and “experts” that Russia's economy will scale down sharply, with the world’s economies heading for contraction, we forecast that as a result of their self-sufficiency, the Russian economy will fare better than those of most developed nations.