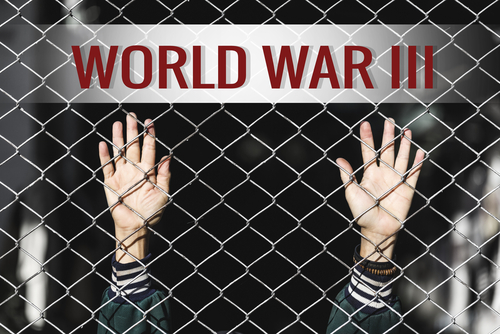 The Daily Star, the British tabloid, accused a Russian news outlet of promoting propaganda when it reported that Moscow is no longer interested in just Ukraine and is looking to demilitarize all of NATO, which means WWIII.

The report pointed to Olga Skabeyeva, “of Putin mouthpiece Rossiya-1,” who said the historic amount of weapons transfers from the West to Ukraine means the war that was once isolated now “spilled over into a global conflict.”

“It’s time to admit, perhaps, that Russia’s special operation in Ukraine is now over, in the sense that a real war has started, World War III. We are being forced to demilitarize, not just Ukraine but NATO as a whole.”

She mentioned a missile attack from Ukrainian forces that hit Donetsk, where Russian troops have been focusing their attack. She said they were not only Soviet-era Smerch MLRS that hit the city. They “were carried out with American M777 howitzers. These Russian troops have also been seen using armored vehicles that were provided by the U.K.. One official from the U.K. told the paper that the Russian army is nearing a point where it cannot “take any more losses.”

The decision last week by President Joe Biden to provide Russia with advanced rocket systems that can be outfitted with missiles capable of traveling about 200 miles rankled Moscow.

Dmitry Medvedev, the deputy chairman of Russia’s national security council, said in an interview with Al Jazeera that Moscow could target Western cities if Ukrainian forces fire these weapons into Russia.

The Kremlin said it is open to negotiations, but blamed the U.S. for inflaming tensions in the region by funding the war effort. (See “UKRAINE WAR ECONOMIC OVERVIEW,” “RUSSIA ENDS GAS EXPORTS TO POLAND, BULGARIA. GERMANY AND ITALY ARE NEXT,” and “U.S. SENDING UKRAINE $500M FOR MORE MURDER WEAPONS.”)

“We know that the United States has been purposefully and meticulously adding fuel to the fire,” Dmitry Peskov, the Kremlin spokesman, said. "The United States pursues the course towards fighting Russia to the last Ukrainian."

Joe Biden wrote an op-ed published in The New York Times last week that confirmed his decision to provide Ukrainian fighters with advanced rocket systems that can be reportedly outfitted with missiles capable of traveling about 200 miles.

Senior officials in Washington insist that Kyiv promised not to fire these weapons into Russian territory.

"There is a risk that such equipment will be placed near Russia's borders and Ukrainians will be able to strike at Russian cities. Such a situation is unacceptable and intolerable for us," he told a Russian news outlet, Newsweek reported.

The advanced rocket system was part of a newly approved, $700 million military aid package for Ukraine that included 1,000 Javelin missiles, counter-artillery radars, and four Mi-17 helicopters. The aid is the 11th package sent to Ukraine from the U.S. The U.S. previously donated $56 billion in aid to Kyiv since the war broke out.

TRENDS FORECAST: President Joe Biden, for the first time, told reporters on Friday that there’s a chance that Ukraine may have to cede land in negotiations for a settlement with its bigger, stronger neighbor.

Kyiv has insisted that it will not give up an inch to Russia, but the American president may have just signaled that the West’s appetite for war—while inflation soars—may not be unlimited.

Zelensky said that Russian troops and separatists control about 20 percent of the country. If he read these pages back in February, he may have been able to cut a deal with Moscow that would have required less land and would have certainly prevented thousands of deaths and billions in destruction.

One of the theories from the West is that the stronger Ukraine is, the better positioned it will be at the negotiating table, but those believers seem to miss one key point: Russia wants a demilitarized Ukraine and will continue fighting to achieve that objective.

Again, we disagree: “The Winner Takes All.”