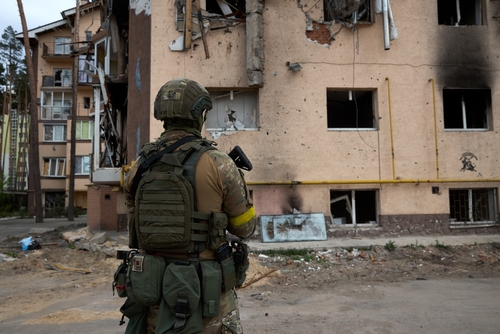 John Kirby, the National Security Council coordinator for strategic communications, repeated Sunday that the U.S. will continue to finance Ukraine’s war effort against Russia despite more losses on the battlefield and reports that Russian President Vladimir Putin ordered troops deeper into the country.

Kirby told Fox News that Ukrainian President Volodymyr Zelensky will determine when it is appropriate to negotiate, saying “he gets to determine how victory is decided and when and on what terms.”

He said the U.S. is going to make sure that Ukraine has what it needs on the battlefield so Zelensky can succeed at the negotiating table.

“But even President Zelensky will tell you that the time is not now for those discussions,” Kirby said.

The Trends Journal has long pointed out that the war in Ukraine has evolved into a war of attrition between Kyiv and Moscow and direct conflict between the U.S. and Russia, since the Washington has sent nearly $50 billion to Ukraine since the war began on 24 February. (See “ZELENSKY PROMISES VICTORY AFTER ADMITTING THAT RUSSIA, SEPARATISTS CONTROL 20 PERCENT OF COUNTRY,” “BRAZIL’S LULA SAYS UKRAINE’S COMEDIAN SHARES BLAME FOR WAR” and “ZELENSKY WON’T BUCKLE, LAMENTS BEING PRESSURED FOR PEACE.”)

Much of the fighting has been isolated in the Donbas. Russian President Vladimir Putin announced Monday that his forces now control the city of Lysychansk.

Despite Russia now controlling all the territory in the Luhansk region, Ukraine claims its troops made a strategic retreat and downplayed the loss of the city.

Still selling the bullshit of victory-at-hand, and repeated by the media as though it has credibility, rather than admitting defeat, they quoted Serhiy Haidai, the Luhansk governor who said losing Lysychansk “hurts,” but it’s not like “losing the war.”

Promoting Washington’s one sided view, NBC News featured Michael A. Horowitz, a geopolitical and security analyst, and head of intelligence at Le Beck consultancy, who said the loss of Severodonetsk last month and Lysychansk are significant for Ukraine, but the decision to retreat “buys Kyiv some time and avoids human losses that would be more critical than the loss of two cities.”

Russia has an enormous advantage in long-distance firepower and could essentially defeat Ukrainian forces in the city with just sheer firepower. Yet the defeat is being sold as a chance to buy more time for the Ukrainian forces until they receive more advanced rocket systems from the U.S. and UK.

Zelensky’s message has been consistent that his country will fight on until it regains control of the territory it lost to Russia. “If the command of our army withdraws people from certain points of the front where the enemy has the greatest fire superiority”—in particular this applies to Lysychansk, Zelensky said, “—it means only one thing: we will return thanks to our tactics, thanks to the increase in the supply of modern weapons.”

Denys Shmygal, Ukraine's prime minister, said it may cost $750 billion to rebuild Ukraine and the seized assets from Russians should pay the bills.

"We believe that the key source of recovery should be the confiscated assets of Russia and Russian oligarchs," he said.

At least three people were killed Sunday in explosions in the Russian city of Belgorod, which borders on Ukraine, according to VOA News.

Andrei Klishas, a Russian lawmaker, called on the Kremlin to respond militarily. Russia accused Ukraine of launching three missiles at the city, which Ukraine has denied.

“The death of civilians and the destruction of civilian infrastructure in Belgorod are a direct act of aggression on the part of Ukraine and require the most severe—including a military—response,” he posted on Telegram.

TRENDPOST: Anyone who suggests anything but a complete victory for Ukraine is immediately condemned by Kyiv and banned by its most supportive Western allies. Russia is a much bigger power and is pounding Ukraine’s eastern side despite billions in weapons and training from the West.

The Biden administration and Ukraine are in no hurry for a peaceful resolution and has said it wants to see Russia badly damaged and weakened so the military is impotent and cannot invade again.

China, in the meantime, is watching all of this and benefiting from buying Russian gas and oil at a steep discount while the rest of the world struggles.