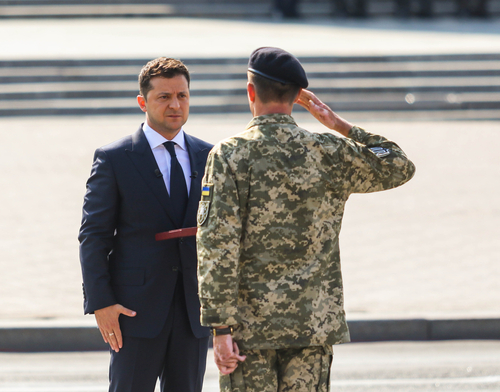 Ukrainian President Volodymyr Zelensky warned Russia not to hold a vote in occupied areas of the country because it would end any chance that Moscow has to negotiate with the “free world.”

Zelensky made the comments during his nightly video address on Sunday as Ukraine reportedly plans a counteroffensive in the southern part of the country. Russian forces continue to make gains in the east.

Ukraine denied reports that Russia advanced around Bakhmut and Avdiivka, which are key cities in the Donetsk Oblast. Taking control of Bakhmut would be seen as a major win for Moscow and would give Russian troops better access to other major hubs, military analysts say.

Despite the gains, Zelensky said Kyiv's position on negotiating has not changed.

“We will give up nothing of what is ours,” he said. He blasted the “pseudo-referendums” and warned Russia against implementing them. He said Moscow would close itself off diplomatically from Ukraine and the rest of the free world, “which the Russian side will clearly need at some point.”

Ukraine said it launched a counteroffensive in the southern region of the country and in Kherson.

Ukraine has been using HIMARS to damage bridges and roads that are effectively cutting off supplies for Russian troops in the area, Britain said.

The report said military analysts say these moves are consistent with preparations for a counteroffensive. (See “ZELENSKY BLINDED BY TRENDS JOURNAL COVER: VOWS NOT TO GIVE UP AN INCH OF TERRITORY TO RUSSIA.”)

The Donetsk People’s Republic, which is a breakaway quasi-state militarily occupied by Russian-backed separatists, has claimed all of the Donetsk region as its territory. John Kirby, the White House national security spokesperson, said a few weeks ago that the Kremlin has plans to annex Kherson, Zaporizhzhia, Donetsk, and Luhansk.

Kyiv has accused Russia’s “shadow” government in Kherson of issuing Russian passports and mandating the use of the ruble, Axios reported. These officials are also planning a “referendum” on joining Russia.

Putin accused Ukraine of taking a “path of violence” in the Donbass region and ordered Russian troops to enter eastern Ukraine to “maintain peace.”

There has been a yearslong conflict in the region between Ukrainian forces and these separatists, and both sides have been blamed for the bloodshed. At the heart of the conflict in Donbass is the disregard of the Minsk II agreement that was signed on 12 February 2015.

Andrian Prokip, a senior associate, Ukraine, at the Wilson Center, wrote, “The Minsk Agreements stipulate establishing a ceasefire and separating the opposing military forces, providing a special constitutional regime for the Donbass (with requisite amending of Ukraine’s constitution), and the holding of elections in the non-controlled territories, with Kyiv thereafter to have control over the Russia-Ukraine border in the Donbas.”

Critics of the agreement call the document vague and say it heavily favors the Russians.

Ukraine blamed Russian forces for targeting its largest nuclear facility in Zaporizhzhya, a city on the Dnieper River in southeastern Ukraine, and raising the prospects of a nuclear disaster.

The plant is the largest in Europe and Sunday was the second day in a row that Ukraine accused the Russians of targeting the plant. Russia denied the charge and blamed Ukrainian forces. The Wall Street Journal noted that the facility has been controlled by the Russians since the early days of the war, but it is being operated by Ukrainian staff.

"This time a nuclear catastrophe was miraculously avoided, but miracles cannot last forever," Energoatom said in a statement.

Yevgeny Balitsky, the head of the pro-Russian regional administration in Zaporizhzhya, issued a statement accusing Ukrainian forces of targeting the fuel storage tanks.

Rafael Grossi, the International Atomic Energy Agency director, said, “Any military firepower directed at or from the facility would amount to playing with fire, with potentially catastrophic consequences.”

TRENDPOST: The Trends Journal’s position since the start of the war is that Zelensky should negotiate for peace because each day that passes inches the world closer to nuclear Armageddon. And, the longer the war rages, since we forecast Russia will defeat Ukraine, the more Ukraine will have to give up when they are in a defeated position.

We have been opposed to Putin’s decision to invade the country, but, unlike the willfully ignorant Western media, we identified reasons why Russia invaded. The attacks on the nuclear power plant are just another example of the risks to the world as the war drags on.

We have noted that Ukraine would have been forced to negotiate with Russia months ago if not for the multi-billion-dollar weapon flows from the West and billions in funding to prop up the economically broke and busted Kyiv government.

Gerald Celente has said the West is fighting more than a proxy war with Russia. It is, by its money and weapons transfers into Ukraine, “an accessory to the crime.”

And on Sunday, President Biden sent another $1 billion of weapons of death to keep bloodying the Ukraine killing fields. Thus, since the Ukraine War began on 24 February, the U.S. has sent over $60 billion to the Ukraine government, which the EU said was the most corrupt in Europe.