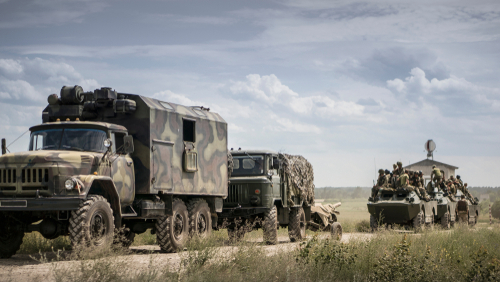 The Russian military has refocused its attention on the Donbas region of Ukraine and seems to be attempting to surround Ukrainian forces before a major offensive, according to a report.

The Financial Times, citing Western defense officials, reported that Russian gains in the eastern region would be a significant blow to Kyiv because of its strategic significance.

The Russian military has been accused of failing to secure major cities in the opening weeks of its invasion and Western officials have said Moscow’s campaign has effectively stalled.

Reuters reported that Ukrainian President Volodymyr Zelensky announced that he is prepared to negotiate with Russia on Donbas due to the slim chances that his forces will ultimately be able to expel Russian troops from his country.

One of the sources told the paper that Donbas is the area “where we have the most concerns.”

“I don’t think there is an imminent risk of Ukrainian troops being encircled but it is one to watch,” the official said.

The region is significant to Russia’s reported goals. Capturing Mariupol, one of the key cities in eastern Ukraine, would allow Russia to essentially create a land bridge between the annexed Crimean Peninsula and the Donbas region.

A Western official told the FT that sealing off Donbas would also prevent Ukrainian reinforcements from joining the fight in Kyiv and other cities under attack.

The Pentagon, citing a defense official, said in a statement that Russia is focusing its effort in the east of Ukraine.

"That's where still there remains a lot of heavy fighting and we think they are trying to not only secure some sort of more substantial gains there as a potential negotiating tactic at the table, but also to cut off Ukrainian forces in the eastern part of the country," the individual said.

Airstrikes continue to pound Kyiv, but it seems Russia’s ground forces are not pursuing a ground offensive at the moment, the Pentagon said.

"They are digging in. They are establishing defensive positions. They don't show any signs of being willing to move on Kyiv from the ground," the statement read.

Ukrainian Brig. Gen. Kirill Budanov said it is becoming clear that Moscow is now attempting to divide the country into “unoccupied and occupied regions,” the report said.

“This is an attempt to create North and South Korea in Ukraine,” he said. Budanov said Russia needs to brace itself for a new “guerrilla” war in the region.

“The season of a total Ukrainian guerrilla safari will soon begin. Then there will be one relevant scenario left for the Russians: how to survive,” he said, according to the New York Post.

TRENDPOST: Anyone who calls on Ukraine to give up the fight against Russia is called a pro-Putin hack in the media. But we have reported for months that Ukraine is no match for the much larger Russian force.

Gerald Celente, has said repeatedly that all the U.S. and NATO military armaments going to Ukraine will only make for more deaths and destruction, since the Ukraine military will not defeat the Russians.

But that does not stop the media from only reporting on Russian troop deaths and completely ignoring casualties among Ukrainian forces. Are we to believe that the only Ukrainians dying in the conflict are sobbing mothers and their children?

Sadly for the world, the Biden administration has proven completely inept when it comes to diplomacy—from Afghanistan to Yemen and now in Ukraine. But it's even worse than inept, it is actually instigating more fighting. (See “RET. COL. DOUGLAS MACGREGOR SAYS RUSSIA WILL CRUSH UKRAINE.”)

U.S. Secretary of State Antony Blinken even told the BBC earlier this month that he believes Ukraine could ultimately defeat the Russians.

Again, as Celente said when Russia invaded Ukraine, despite the U.S. and the media pumping up Zelensky as a “hero” and Joe Biden extolling that “Russian forces have met their match with brave and stiff Ukrainian forces,” they will not defeat Russia and Zelensky’s decision to face off with Putin will lead to unnecessary deaths.