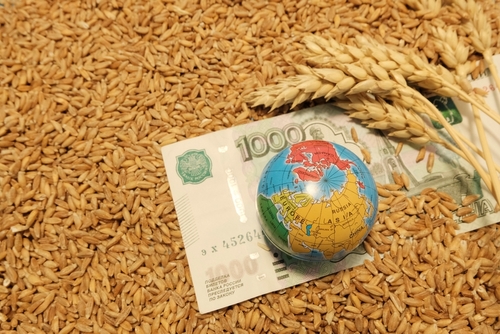 Sergei Lavrov, Russia’s top diplomat, said last week that Moscow is willing to discuss the safe export of grain with Ukraine and Turkey, but said Kyiv needs to make sure the ports are no longer blocked with mines.

Lavrov, who made the comment while attending the G20 in Bali, did not give a clear date as to when these negotiations could take place but said Moscow is “always ready” to negotiate.

Western countries, led by the U.S., have accused Moscow of enforcing a blockade at Ukrainian ports. The Wall Street Journal reported that Turkey and the UN have taken the lead in these negotiations.

Ukrainian President Volodymyr Zelensky has said that there is about 22 million tons of grain that Russia has prevented from being exported. Ukraine is referred to as Europe’s “breadbasket.”

The Associated Press, citing the Ukrainian Grain Association, reported that the country could export up to 7 million tons of grain per month, but only shipped 2.2 million tons in June. The shipments are divided up about evenly between Europe, North Africa, Asia. The UN said Kyiv accounted for 10 percent of global wheat exports in 2021.

The situation has led to a surge in food prices and a global food crisis. The New York Times reported that the price of bread is up 35 percent in Yemen, and cooking oil in Kenya has become a rare commodity.

President Joe Biden has said that he is working with Ukrainian officials to build temporary silos on the borders of Ukraine and Poland to get the grain “out onto the market to help bring down food prices.”

Russian President Vladimir Putin has been accused of using grain as a bargaining chip to force Western countries to ease some sanctions.

Antonio Guterres, the UN secretary-general, said earlier this  month that the Ukraine War has been another catalyst in the food shortage that was already unfolding due to COVID-19 lockdowns, climate change, and inequality.”

Mohamud Mohamed Hassan, country director for Save the Children, says the situation in Somalia is worse than any he has seen before, according to CNN. The report, citing the UN, said about 7 million people—about half the country’s population—do not have enough to eat. The UN said 1.5 million children ​under the age of 5 are acutely malnourished and about 448 have died this year, though the number may be higher.

Ukraine has accused Russia of stealing some of the grain and exporting thousands of tons on a ship from Turkey. A Russian-flagged ship has been held and is being investigated by Turkish officials to determine the country origin of the shipment.

TRENDPOST: The Trends Journal has warned for the better part of two years that the COVID-19 War launched by politicians and subsequent draconian lockdown orders will kill more people than the virus as it would accelerate the number of the world's poorest who face starvation. (See “COVID WAR AND CIVIL WARS: KILLING MORE THAN THE VIRUS.”)

Months before the first missile was launched in Ukraine, the World Food Programme (WFP), the anti-hunger agency of the UN, estimated that 45 million people were on the “edge of famine.”

While the UN said the number of people living in famine conditions is up 500 percent since 2016, and about 270 million people worldwide are facing extreme food insecurity, and this could lead to social unrest, it is old news for Trends Journal subscribers. Indeed, it “will” and not “could” lead to social unrest. (See “NEW WORLD DISORDER TOP TREND: NATIONS SINKING DEEPER, PEOPLE SCREAMING LOUDER.”)

In fact, this was one of our Top Trends for 2020. Back in 2019, across the continents, people were taking to the streets in protest of basic living standards, government corruption, crime and violence.

The demonstrations were stopped by governments when the COVID War broke out in February/March of 2020 and people were locked down and forbidden to protest.

Now, with both the COVID War which has destroyed the lives and livelihoods of billions and the Ukraine War which has driven up various commodity prices, the levels of protest and demonstrations will dramatically escalate... and so too will the refugee crisis, as more people flee their economically ravaged crime ridden nations.

This in turn will escalate new anti-immigrant and populist movements in nations refugees are fleeing into.