RUSSIA DEALS WITH TO INDIA TO OFFSET WEST’S SANCTIONS 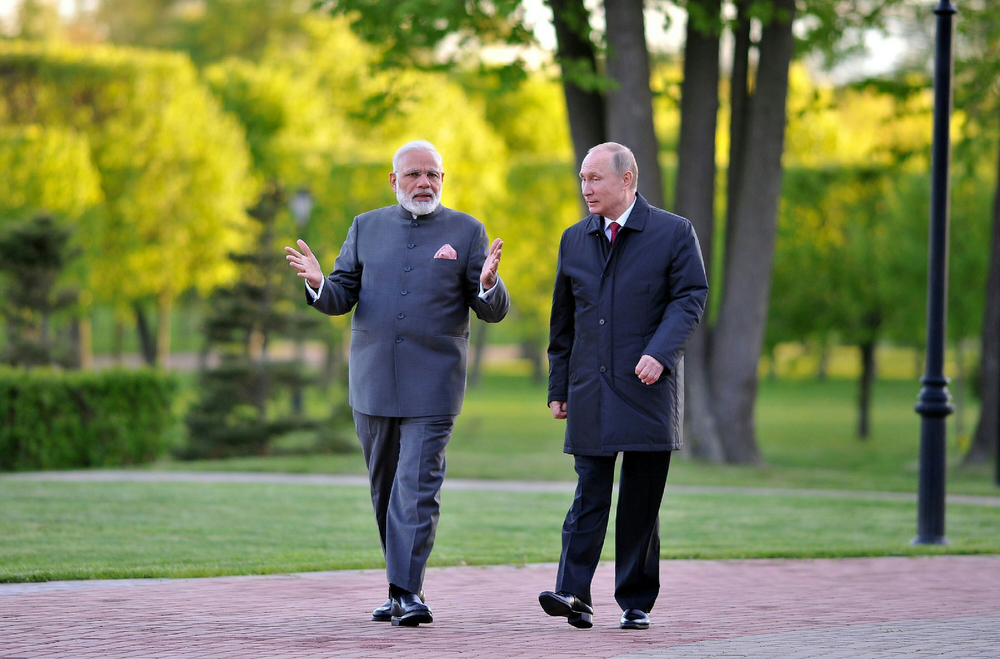 Moscow sent its top envoy to India last week to fortify its relationship with New Delhi in the face of blistering Western sanctions that were put into place following Russia’s invasion of Ukraine.

Russia's Foreign Minister Sergei Lavrov had previously met with his Chinese counterpart last week with top government officials in India. Both China and India abstained from voting on a U.N. resolution condemning the Ukraine invasion.

India finds itself in a precarious position because while it doesn’t want to abandon the West, it also does not want to lose a friend in Russia—an important trade partner and weapons provider.

Lavrov struck a familiar theme before the meeting and praised the long relationship between Moscow and New Delhi. Of course, the Ukraine War was a top subject during Lavrov’s meeting on Friday with his counterpart Subrahmanyam Jaishankar in New Delhi.

"These days our Western colleagues would like to reduce any meaningful international issue to the crisis in Ukraine," Lavrov said. He praised India for weighing the facts, “not just in a one-sided way.”

The U.S. has been doing its best to pressure countries to abandon Russia. Gina Raimondo, the U.S. Commerce secretary, said India’s purchases of cheap Russian oil were “deeply disappointing,” CNBC reported. She urged New Delhi to stand “on the right side of history.”

"I would put my country's national interests first and I would put my energy security first," she said, according to Reuters. "Why should I not buy it? I need it for my people."

TRENDPOST: Indeed, India, the world’s fourth largest importer of oil, needs Russian oil, and now, the bottom line is that they can get it at a discount. And as we pointed out in last week’s Trends Journal, India buys fertilizer, fuel, and gems from Russia and runs a trade deficit with its partner to the north; India’s chief export to Russia is pharmaceuticals.

Russia’s ties with India run deep and Moscow is New Delhi’s biggest supplier of defense equipment, Reuters reported. The countries agreed to continue doing business and will use a rupee-ruble mechanism to trade oil, the report said.

Prime Minister Narendra Modi has had a series of phone calls with Russian President Vladimir Putin and Ukrainian President Volodymyr Zelensky. He has a good relationship with both and there was talk about Modi mediating a peace effort.

India has said its position on the Ukraine conflict has been “steadfast and consistent” and that it has been seeking immediate cessation of violence, The Indian Express reported.

TRENDPOST: Here's another example of the U.S. trying to pressure a sovereign country—not to look into the best interest of its people—but rather carry out the U.S.'s mission.

If the U.S. and Western countries are no longer buying Russian oil, why shouldn't other countries benefit from these discounted prices? After all, in the words of former President Bill Clinton’s campaign team; “It’s the economy, stupid.”

We have reported in previous issues that the U.S. also warned China not to intervene when it came to the sanctions against Russia. (See “BEIJING: STOP WESTERN SANCTIONS ON RUSSIA” and “INDIA AND RUSSIA FORMING NEW TRADE TIES.”)

TREND FORECAST: The negotiations between Russia and India highlight a weakness in the West’s sanctions against Russia: there are countries that are either non-aligned or friendly with Russia and China that are willing to ignore the sanctions to strengthen their trade relationships with either or both giant nations.

The West—while talking tough and continuing to arm Ukrainians to fight the war with Russia—will need to adjust to a redrawn global economic map when the war has run its course and make amends with China and India import and export what they need to boost their bottom line.

Again, “It’s the economy, stupid,” and the West needs these massive market sectors.