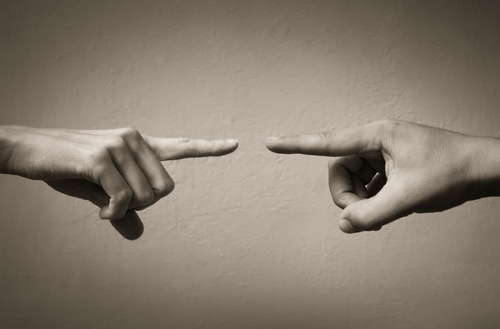 Russia and Ukraine traded blame last week after a train station in eastern Donbas was struck by a missile, killing at least 50, which mainly consisted of women and children looking to flee the region due to the looming Russian offensive.

The missile hit the station located in Kramatorsk, which is located in Donetsk. The report said at least 50 people were killed.

About 100 people—many listed in critical condition—are being treated at hospitals, including 19 children.

NPR reported that some of the children lost limbs in the 10:30 a.m. local time attack.

Ukrainian President Volodymyr Zelensky called the attack a war crime and promised that everyone who is responsible will “be brought to justice.”

Ukrainian authorities said “for our children” was written in Russian on the remnants of one of the missiles.

Moscow denied any responsibility and said the attack could have been carried out by Ukrainians in a false-flag operation.

A spokesman from the Russian Defense Ministry claimed that the missile was fired from where Ukrainian troops had been positioned. Russia claimed that its military no longer used the Soviet-made Tochka-U ballistic missile.

The BBC, citing Amnesty International weapons experts, reported that these missiles are notoriously inaccurate and have been known to miss their targets by half a kilometer.

Zelensky took to Instagram and accused the Russian military of “lacking the strength and courage to stand up to us on the battlefield, they are cynically destroying the civilian population.

"This is an evil that has no limits. And if it is not punished, it will never stop."

The train station strike last week was not the first time Russians have been accused of committing war crimes during the weeks-long conflict in Ukraine.

The mass killings in Bucha have also attracted a large amount of Western media coverage due to the gruesome nature of the deaths.

More than 360 civilians were killed in the city and up to 280 were buried in a mass grave by other residents, Reuters reported. Some of these civilians were discovered with their wrists tied and evidence that some were tortured.

Ukraine blamed Russia for the atrocities and Russia denied the allegations.

TRENDPOST: Gerald Celente and Judge Andrew Napolitano discussed the killings on “Celente & the Judge” last week. Napolitano said the Western media is attempting to gin up Americans for a future war with Russia.

The Judge, who served as Fox News' senior judicial analyst for 24 years, said “I’m not blaming the networks because they are in the business of getting ratings. And they see dead bodies with their hands tied behind their back… this is ginning up the public to accept the concept that we might enter that war. This is ginning up the public. The government, the military-industrial complex, the media getting the public ready for war.”

U.S. President Joe Biden, who has called Russian President Vladimir Putin a war criminal, killer, and brute over the course of the past several weeks, said last week that it is imperative that his counterpart be tried as a war criminal after the Bucha incident for which scores of dead bodies were found in a mass grave.

"This guy is brutal," Biden said.

Biden treated the Bucha killings as validation for his earlier claim that Putin is a war criminal.

“Well, the truth of the matter, you saw what happened in Bucha. This warrants him—he is a war criminal,” he said.

Zelensky called the killings in Bucha an act of genocide, but Biden did not go that far.

TRENDPOST: The Global Times, the daily newspaper arm of the Chinese Communist Party, ran an editorial last week—once again—taking the U.S. to task for trying to coerce smaller countries into doing its bidding under the threat of military or economic force.

The paper pointed to a comment from Wendy Sherman, the U.S. deputy secretary of state, who warned China that Washington could impose Russia-like sanctions on Beijing if it provides material support to Moscow.

“It seems that the Ukraine crisis is also a mirror reflecting the US’ nature of seeking hegemony for itself by coercion,” the paper wrote. “Washington first kidnapped small countries with the lure of security, turning them into pawns to check and contain major countries. Then, it has continued to instigate and incite disputes, and pushed these pawns into the fiery pit, held allies hostage by virtue of so-called values and made them pay for its hegemony.” (See “WAR IN UKRAINE ECONOMIC OVERVIEW,” “BEIJING: STOP WESTERN SANCTIONS ON RUSSIA” and “CHINA STANDS WITH RUSSIA. TELLS E.U. AND U.S. FU!”)

The Trends Journal has reported extensively about the pressure campaign by the U.S. and allies against China.

The Global Times called it “ironic” that the U.S. has been trying to portray China as the country employing “coercion diplomacy,” and said Washington’s response to the Ukraine War has “precisely shown that it is the US who is sparing no efforts to coerce other countries. It is trying to drag other parties to the crisis while it passes the bucks and reaps the profits.”

The U.S. has also been working to pressure India to turn its back on Russia. Brian Deese, the National Economic Council director, said last week that the U.S.’s message to New Delhi is “that the costs and consequences for them of moving into a more explicit strategic alignment with Russia will be significant and long term.”