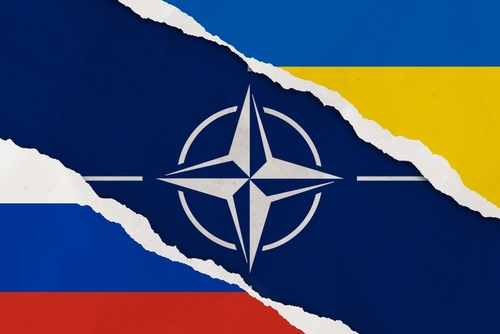 Russia’s top diplomat Sergey Lavrov, accused NATO of disregarding the NATO-Russia “Founding Act” that was put in place decades ago to express the desire of the Alliance to co-exist with Moscow and cool tensions about its military expansion east.

Russia's invasion of Ukraine has sparked a swift reaction from European countries who are now selling the line to the populace and the media that just as Russia attacked Ukraine, Europe is next.

In response, as we have detailed, NATO allies have increased troops and flooded the Alliance with military equipment. The Kremlin said these maneuvers are in clear violation of the "Founding Act on Mutual Relations, Cooperation and Security between NATO and the Russian Federation."

Lavrov said the terms of the 1997 agreement indicated that NATO countries would not bolster forces to the east of Germany.

But on Wednesday, during a NATO summit in Spain, President Joe Biden announced that the U.S. will send destroyers and new missile systems into Europe. The U.S. will also send an additional 20,000 troops to Europe to bring the total to over 100,000. About 300,000 NATO troops are on high alert.

Baltic countries like Lithuania, Latvia, and Estonia have called on NATO to put 50,000 troops permanently stationed in their countries in response to the threat from Russia. There are currently about 4,000 troops.

“The decisions that were taken [in Madrid] grossly violate the terms of the Founding Act, first of all, the parts regarding NATO’s obligation not to host, on a permanent basis, any significant troops in the territories of the new—meaning Eastern European—member states,” he said.

The U.S. announced that it will open a permanent military base in Poland for the first time.

President Joe Biden attempted to present the announcement as yet another example of the Ukraine War backfiring on Putin. He said Putin was looking for the "Finlandization" of Europe, but instead he got the "NATOization of Europe."

“And that is exactly what he didn't want, but exactly what needs to be done to guarantee security for Europe. And I think it's necessary,” Biden said.

“It is in countries on the frontline of a potential attack that the presence of command structures is extremely important so that they can directly respond to threats that are most real here,” he said.

Biden said the U.S. intends to enhance its presence in Europe to “defend every inch of allied territory.”

The U.S. aims to put together a permanent base in Poland and will send 5,000 additional troops to Romania.

Lavrov pointed out that the treaty was never officially denounced.

He said the West's retaliation to Russia's invasion resulted in a new "iron curtain" descending between Moscow and the West. He blamed the West for fanning the flames in Ukraine and for pumping in more weapons that will keep the conflict going.

“Let them just behave carefully,” he said about the West's actions.

“From now on, we will trust neither the Americans nor the EU,” Lavrov said. “We will do everything necessary not to depend on them in critically important industries.”

Presidents Bill Clinton and Boris Yeltsin met at the Helsinki summit in March 1997 to discuss how to create a "cooperative relationship between NATO and Russia."

The U.S. State Department praised the agreement for providing the "basis for an enduring and robust partnership between the Alliance and Russia, one that can make an important contribution to Europe's security architecture in the 21st century."

Daniel Fried, Steven Pifer, and Alexander Vershbow, retired U.S. Foreign Service officers who served as senior directors on the National Security Council during the Clinton administration, wrote in The Hill earlier this month that the Founding Act has outlived its usefulness and should be dissolved.

“While the Founding Act produced tangible results in its early years, Europe today faces an aggressive, revanchist Russia,” they wrote. “Russian President Vladimir Putin’s actions have destroyed the basis for cooperation. NATO should suspend the Founding Act and, in particular, renounce its assurance regarding the stationing of conventional forces on the territory of new member states.”

Putin spoke publicly about Ukraine in January and blamed the Biden administration for essentially trying to drag Russia into a war because Washington refused to negotiate on key security demands the Kremlin had regarding NATO's expansion east.

Putin hoped that NATO would guarantee that it would not accept Ukraine into its alliance. He also wanted the Alliance to remove troops and missile systems in bordering countries.

NATO’s so-called “open-door”—allowing any country to join—was called a nonstarter and rejected.

“Let’s imagine Ukraine [becomes] a NATO member and starts these military operations. Are we supposed to go to war with the NATO bloc? Has anyone given that any thought? Apparently not,” Putin said.

From Russian defectors allegedly being poisoned in the U.K, to Donald Trump’s Presidential win, to any cyberattack, high crime and misdemeanors—without providing a shred of hard evidence, America’s media and politicians blame it on the Russians. (See “Pure Propaganda.”)

And while the western media continues to report on the German horrors of the Holocaust which killed over 6 million Jewish civilians, Adolph Hitler’s “Operation Barbarossa” was launched against the Soviet Union 80 years ago today, costing the lives of some 30 million people on the Eastern Front.

Yet, these Nazi horrors have been brainwashed out of society, masked by the Cold War and the Iron Curtain that separated Eastern Europe and Russia from the west.