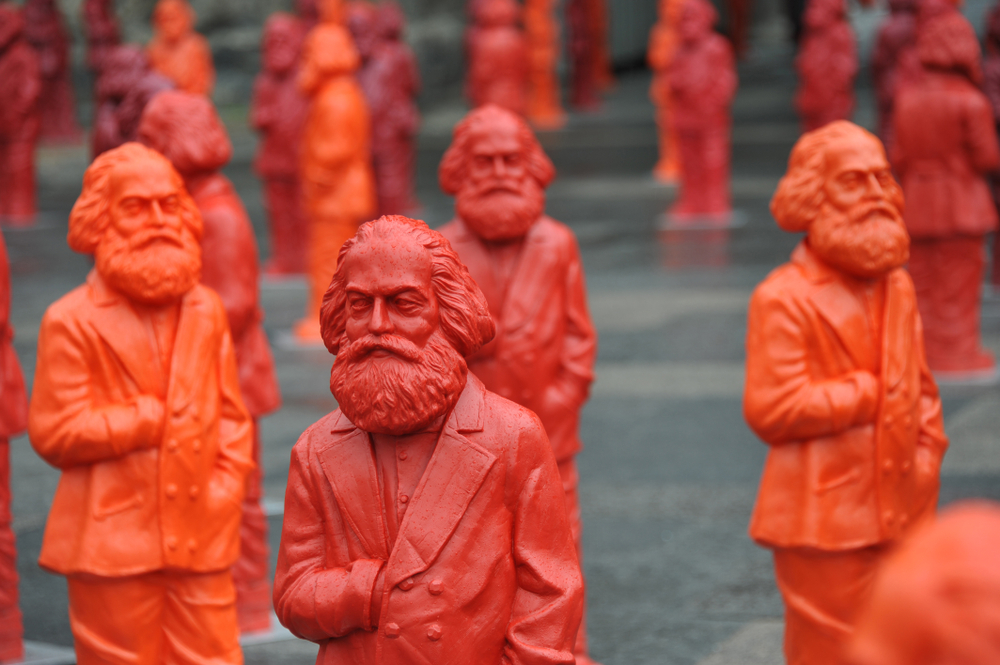 Funny how many of the same people who rail against “man-made” climate change have no problem with scientists charging headlong into synthetic biology, transhumanism, Artificial General Intelligence (AGI) and dangerous gain-of-function viral experiments.

Though some may claim to be bound by “ethics” and regulatory frameworks, disturbing stories on an almost daily basis are signaling that average people have very little say in what scientists and technocrats are doing.

One recent sensational report concerned “Xenobots.” These so-called organic robots, assembled from stem cells from a certain species of African frog, were originally created in 2020.

Now researchers from the University of Vermont, Tufts University, and Harvard University's Wyss Institute for Biologically Inspired Engineering have used Artificial Intelligence to design Xenobots that can self-replicate.

The computer-designed and hand-assembled organisms can swim out into their tiny dish, find single cells, gather hundreds of them, and assemble "baby" Xenobots inside their Pac-Man-shaped "mouth"—that, a few days later, become new Xenobots that look and move exactly like themselves.

The new Xenobots can then go out and discover cells to replicate themselves. Time and time again.

This type of organic self-reproduction has never previously been seen in nature.

The team behind the experiments released a video of the phenomen.

Asked about the risks of creating novel self-replicating organisms, one of the lead researchers dismissed concerns. Computer scientist Joshua Bongard of UVM assured the world that his team’s research was vetted by federal, state and institutional ethics experts.

“[Xenobots] are not what keep me awake at night. What presents risk is the next pandemic; accelerating ecosystem damage from pollution; intensifying threats from climate change.”

Of course, Bongard’s defense failed to note that many now believe that the COVID virus was man-made, originating at a Wuhan China biolab via controversial gain-of-function experiments funded in part by Anthony Fauci.

Scientists like Bongard confer upon themselves a moral authority to conduct virtually any research they desire. They always cite purported goals to improve the world in one way or another, and never mention incentives like money or professional glory.

Some do espouse ideological goals, couched in woke language including “equity,” “sustainability,” and “climate emergency.”

Beyond particulars, a more general mindset has subsumed current science. Particulars might vary. But there is a remarkable convergence around the idea that natural humans and even the natural world itself can and must be remade.

Science has claimed a new moral imperative to do so.

The Hubris of Scientists Metastasizing

It’s not uncommon these days to hear of scientists creating “meat” from fungi, introducing human genetic material into monkees, and designing killer robots that may soon outperform even those most elite of human soldiers.

Scientists are no longer content with incrementally increasing knowledge, or devising technologies that offer greater efficiencies or improvements to people.

There is a radical ethos, which claims that everything must be remade to deal with dire emergencies that stem from the existence and proclivities of humans.

A recent World Economics Forum (WEF) profile of the field of synthetic biology highlights the mindset:

“Synthetic biology is an emerging field which applies engineering principles to the design and modification of living systems, thus underpinning and accelerating technological advances with clear potential to provide impact at scale to the global economy. Manufacturers are turning towards this method to efficiently produce high performance, sustainable products.”

In other words, the entire genome of organic life on earth is open to tampering and modification by scientists.

By their own admission, they won't lose a wink of sleep worrying about the ramifications of their activities, because like all zealots, they have a hubris which comes with moral certitude about their purposes.

One scientist, Dr. Jenny Molloy of the University of Cambridge, was asked in the WEF profile, “What is the most exciting new development in synthetic biology? What global challenge does this address?”

Molloy, a Senior Research Associate at the Department of Chemical Engineering and Biotechnology, answered:

“I’d say the ability to de novo synthesize DNA at scale and precisely edit it. When I was trying to genetically engineer mosquitoes, constructing DNA modules was laborious and it was really a roll of the dice as to where in the genome that DNA would end up. Having more affordable ways to write as well as read DNA with increased elegance, precision editing of CRISPR has enabled exciting advances to address so many global challenges: from drug discovery to crop improvement.”

When I was trying to genetically engineer mosquitos. One might inquire, who conferred to Molloy or anyone else the right to genetically alter and “engineer” any natural species?

The answer certainly isn’t the masses of average people living on earth.

The hubris of current science can be seen in countless current imperatives. Banning combustion engines, mandating “carbon allowances,” jettisoning Constitutionally protected rights and freedoms, outlawing criticism of “science,” and altering definitions of “men” and “women,” or what constitutes a vaccine, are all symptoms of that hubris.

But even radically remaking society is hardly the endpoint.

Redesigning nature itself, including humanness, is the new grail for the “innovations” of science.

Scientists wield more practical technological power than ever before.

But it’s not destined to last. Technological power won’t be going away. But rather human control over it will be one more thing piled on the ash heap of history.

Scientists call it the “singularity.”

Janet Adams is the Chief Operating Officer at SingularityNET, a blockchain initiative devoted to advancing Artificial General Intelligence (AGI), or the ability of machine intelligence to think like humans.

Adams noted in a recent interview:

“Robots with extremely human-like appearance and behaviour would

be a very likely consequence of a Technological Singularity, but this may not be as fundamental an advance as superhuman reasoning, thinking and learning ability.”

While SingularityNET and trade tech companies like Google and Amazon are hyper-focused on AI brains, other companies like Ameca in the UK are creating super-realistic bodies for AI minds to occupy.

A New York Post article this past week profiled the company and their eerie showcase product. According to Ameca, their android is designed to “strike an instant rapport with anybody” due to its personlike nature:

“Human-like artificial intelligence needs a human-like artificial body… Ameca is intended as a cloud-connected platform to test artificial intelligence and machine learning systems. The robot’s congeniality makes it “the perfect platform to develop interaction between us humans and any metaverse or digital realm,” the company stated. Owners can “gain access to all the robots [sic] data, control it as [their] personal avatar, animate and simulate, all available from anywhere in the world.”

As the Trends Journal has previously detailed, the U.S. military has its own military robotics programs, focused on designing highly lethal, potentially independently acting machines.

Adams at SingularityNET and other scientists admit that machines with capabilities to war with and supersede humankind are a possible outcome of current initiatives.

She posits that “self-aware” robots will deserve to be accorded the same rights to existence as humans. And she envisions AGI beings and humans working it out together:

“The day an AGI or robot declares that it is self-aware and screams out that it wants equal rights, it’s going to be tough for most humans to hard-heartedly ignore that…”

“Legal, economic and cultural systems will need to adapt radically and rapidly to accommodate the new realities opened up by the various Singularitarian technologies on the horizon. In the end the new rules will be made by humans and AGIs working together.”

Like the field of synthetic biology, scientists working on “singularity” technologies literally have no compunction about assigning themselves the moral imperative to introduce radical and potentially catastrophic innovations to the world.

Again, many of these same scientists are on the forefront bemoaning the destructive effects of man-made climate change and the fact that humans are still allowed to burn coal, gas and firewood.

Scientists often paint views concerning the outcomes of their unbound pursuits which can be charitably described as naive.

Speaking about super intelligent and physically super-human robots, Adams imagines that treating them with kindness is the surest remedy for avoiding their potential wrath. She drew an example from the sci-fi series Westworld to make her point:

“The key lesson of Westworld is that if we want our human-level AGI robots to treat us in a beneficial way, we should probably treat them in a beneficial way. This is not exactly a surprising or advanced conclusion—the most likely route to beneficial AGI is to ensconce early-stage evolving AGI minds in mutual compassion, aid, love and co-creation with human beings.”

Of course, there’s virtually no science to corroborate Adam’s “unsurprising” conclusion that applying the golden rule to superior robots will ensure human salvation.

If machines outstrip humans in intelligence and other attributes that correlate with survival, who is to say how they will consider or treat humanity?

Maybe they will be content to benignly create and sustain a utopian playpen for future humanity.

Does that sound plausible?

When has a superior form of life on earth ever subjugated itself meekly to a lower form?

Many singularist minded scientists hope for genetic improvements and a merging with machines that will constitute a new age of transhumanism.

Again, there is virtually no science that can predict such an outcome, let alone coherently argue how or why that would represent an advance for humanity.

Machines may well consider the human genome something to be tinkered with to augment their abilities, not vice versa.

Then there’s the thorny question of God and Heaven.

Sentient machines may calculate to a near certainty that neither exists.

But near certainty is not complete certainty.

What if that remaining sliver of doubt gnaws at our silicon bettors?

What if a sentient intelligence asks the question, why should souls, the perfection of heaven, and admittance to the presence of the majesty of God be reserved to organic Abel, who is so far inferior to ourselves?

What will silicon Cain do then?