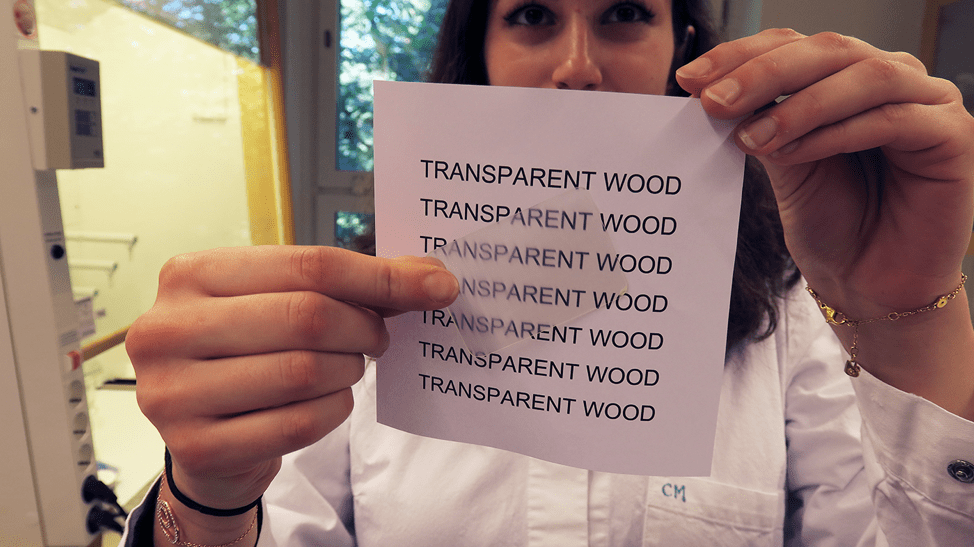 Researchers are reinventing wood for the 21st century, making it transparent and embedding it with electronic sensors.

The reason: concrete, steel, and glass – the staples of commercial construction – are not only finite resources but making them also emits an estimated 11 percent of the world’s excess CO2. Growing a steady supply of construction timber would not only withdraw excess carbon from the atmosphere but also store carbon in structures themselves.

Woodoo, a French venture, has found a way to strip out lignin – the carbon compound that holds wood fibers together – from wood and replace it with select polymers. The result is a material that’s up to five times stronger than ordinary wood of the same thickness, less subject to weather damage, more fire-resistant, and transparent.

The company already is producing about 5,000 square meters of transparent wood annually, selling it to automakers interested in testing wooden dashboards with built-in touch panels.

Scientists at Stockholm’s KTH Royal Institute of Technology are embedding their version of transparent wood not only with sensors, but also with tiny LEDs. They envision wooden ceilings with built-in diffuse, soft lighting.

Re-engineered wood also can have a role in solar power. By scattering semiconducting atoms through the material, the Swedish group makes light travel farther through the wood. That could mean pulling more energy from the light as it moves along.

Also, by replacing the polymers in the new wood with other materials, buildings could have windows that absorb heat during the day and release it at night.

Challenges remain for this new technology. One is scaling to profitable commercial size. Another is finding a greener polymer to replace lignin; currently, developers use  polymers from petroleum. Also, lignin is yet another form of carbon that has to be disposed of in a benign way after it’s taken from raw wood.

TRENDPOST: The search for renewable building materials that duplicate the qualities of steel and concrete is seeding a new field of research and development. The resulting products will likely begin to take market share in the mid- to late 2020s.