QUADRUPLE-VAXXED FAUCI GETS COVID, GETS SICK 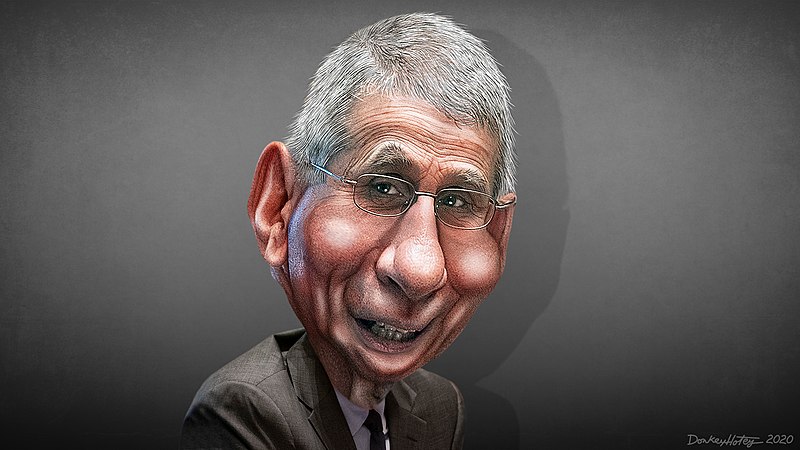 Dr. Anthony Fauci announced that he is back on Paxlovid, the antiviral medication, to treat COVID-19 after recovering from the virus only to test positive again days later in what is known as a “Paxlovid Rebound.”

Fauci appeared virtually during an appearance at the Foreign Policy Global Health Forum and said the symptoms are “much worse.” He said he tested negative for three days before testing positive again.

The Hill reported that a “rebound” infection does not mean an individual is “re-infected,” and can be part of the “natural history” of the virus.

The paper pointed out that he missed his daughter’s wedding and participated remotely. (See “FULLY VAXXED, FULL OF COVID, FULL OF CRAP,” “GET VAXXED, GET COVID: THE ONES THAT GOT IT BRAGGED THEY GOT THE JAB” and “TOP COVID WAR AND U.S. WAR-HAWKS GET HIT WITH VIRUS.”)

Fauci, 81, was a candidate for the Paxlovid treatment because of his age. He said the day after he was diagnosed for a second time, he began to feel "really poorly," and "much worse than in the first go around," he added.

Paxlovid could reduce the risk of hospitalization and death from COVID-19 by 89 percent, UC San Diego Health said. Treatment should be initiated within five days of symptom onset and taken twice daily for five consecutive days.

The school recently studied to see if the virus developed any drug resistance after these rebound cases began to emerge, and found that was not the case. The virus was still sensitive to the drug and showed no relevant mutations that would reduce the drug’s effectiveness, the school said.

“Our main concern was that the coronavirus might be developing resistance to Paxlovid, so to find that was not the case was a huge relief,” said the school’s Aaron F. Carlin, MD, PhD.

About 300 people in the United States are dying from COVID a day and the average number of new infections each day has been over 100,000 since the end of May. About 66.8 percent of Americans are vaccinated. Nearly 86 million in the U.S. have been infected with the virus and over one million have died.

Studies have shown that the Omicron variant has been effective in evading the current batch of vaccines. Those who come down with these infections and recover show a poor boost to the immune system to prevent future infection.

“In those who were triple vaccinated and had no prior SARS-CoV-2 infection, Omicron infection provided an immune boost against previous variants (Alpha, Beta, Gamma, Delta and the original ancestral strain), but less so against Omicron itself,” Imperial College of London wrote. “Those infected during the first wave of the pandemic and then again later with Omicron lacked any boosting.”

TRENDPOST: Days after Fauci announced his infection, Dr. Rochelle P. Walensky, the head of the Centers for Disease Control and Prevention, recommended that children 6 months through 5 years of age take the Pfizer COVID-19 jab.

"This expands eligibility for vaccination to nearly 20 million additional children and means that all Americans ages 6 months and older are now eligible for vaccination," a statement said.

The New York Times reported that over two million children ages 6 months to 4 years had been infected with the virus. Of those, 20,000 were hospitalized and 200 had died from the virus, which is a death rate of 0.01 percent.

It is worth pointing out that Fauci admitted that the reason that he was not hospitalized was due to the early intervention with Paxlovid, not the fact that he has been jabbed with the vaccine four times.

ABC News pointed out last week that “experts” say that they "are no longer hopeful vaccines will stop the virus in its tracks, now that it's clear vaccinated people can develop mild disease and transmit illness to others.”

“When it comes to vaccines and COVID-19 infection, there’s good news and bad news,” Dr. Shira Doron, an infectious disease physician and hospital epidemiologist at Tufts Medical Center, told the network that “The bad news is that effectiveness at preventing infection is a lot lower in the omicron era, and wanes quickly after vaccination.”