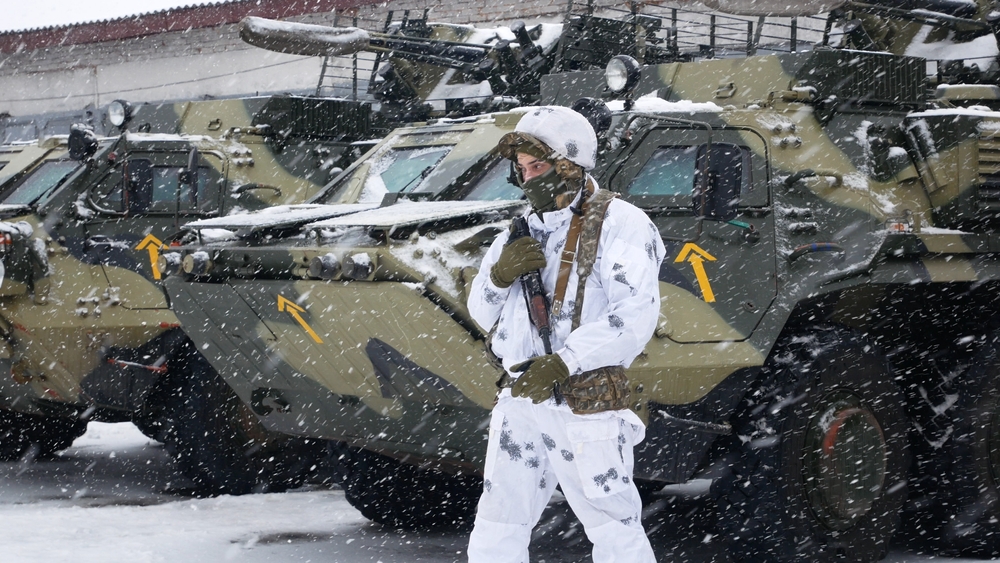 Russian President Vladimir Putin on Sunday said Moscow may be forced to target “objects that we haven't yet struck” after the U.S. and U.K. promised Kyiv long-range rocket systems that the Kremlin has previously called a red line.

Putin’s comments came on the same day that Russia launched airstrikes on Kyiv. Russia targeted T-72 tanks that were donated by Western countries. The Guardian reported that these tanks were stored inside a car repair business, which Ukraine denied.

Kyiv went about five weeks since similar attacks as much of the fighting took place on the eastern edge of the country.

Politico reported that these forces struck railway facilities and infrastructure in Kyiv. Ukraine said one of the missiles fired by Russian forces just missed its Energoatom nuclear plant in Pivdennoukrainsk, about 220 south of Kyiv. The report said air raid alarms rang out across the capital and the attack “showed that Russia still had the capability and willingness to hit at Ukraine's heart since abandoning its wider offensive across the country to instead focus its efforts in the east. One person was wounded.

The U.S. and U.K. both agreed last week to provide Ukrainian fighters with long-range missile systems after debate on whether these systems could be fired deep into Russia. Kyiv said it needs these systems to counter the Russian offensive in the Donbas.

“All this fuss around additional deliveries of weapons, in my opinion, has only one goal: to drag out the armed conflict as much as possible,” Putin said. He continued, “We understand that this supply [of advanced rocket systems] from the United States and some other countries is meant to make up for the losses of this military equipment. This is nothing new. It doesn’t change anything in essence.”

Last week, the Ukraine War reached its 100th day and most analysts believe the war will continue to drag on and become a war of attrition. With each day that passes, the West seems more and more intent on joining the fray.

“What we're looking at now is what the war in Ukraine is likely to look like in 100 days, not radically different,” Ian Bremmer, the president of the Eurasia Group, told The New York Times. “But I think the confrontation with the West has the potential to be significantly worse.”

Ukrainian President Volodymyr Zelensky has recently said that he believes victory is within Kyiv's grasp. In his mind, victory means all Russian forces would be expelled from the country and his forces regain every inch of Ukrainian territory.

Zelensky pointed out last week that Russian forces and separatists control about 20 percent of the country. To put the size into perspective, the land mass would be equal to Belgium, Netherlands and Luxembourg combined.

Dmitri S. Peskov, the Kremlin spokesman, told reporters that Russian troops “liberated” areas of Ukraine that he said had been Nazi-minded.

TRENDPOST: The Trends Journal has long stated that it is firmly opposed to Russia’s invasion of Ukraine, but as we have detailed, we understand and have detailed the reasons why. Among them as noted in articles such as these:

Yet, despite the “other side of the story,” the Western media presents the invasion as unprovoked and paints Putin as an evil madman, like Hitler.

These outlets conveniently forget that the U.S. disregarded Moscow’s legitimate security concerns before the war. Zelensky, a former comedian who starred in a TV comedy show playing the President of Ukraine, enjoys his celebrity status in the West, and is playing the role of a wartime leader. But his people are suffering and his nation is being destroyed.

The Times pointed out that 6.5 million Ukrainians have fled the country and half of Ukraine’s businesses have closed. The paper said up to 90 percent of the country could fall below the poverty line and there has been $100 million in damage to infrastructure. Zelensky said about 100 Ukrainian soldiers are dying each day, mainly in the Donbas region.

TREND FORECAST: French President Emmanuel Macron noted the importance of peace negotiations between Russia and Ukraine. Macron, one of the few Western leaders in contact with Moscow after the invasion began, said, “We must not humiliate Russia so that the day when the fighting stops we can build an exit ramp through diplomatic means. I am convinced that it is France's role to be a mediating power.”

Dmitro Kuleba, the Ukrainian foreign minister, took to Twitter and posted, “Calls to avoid humiliation of Russia can only humiliate France and every other country that would call for it.”

Despite the Ukraine tough-talk—and the tens of billions of deadly weapons supplied to Ukraine to fight Russia—we maintain our forecast that Ukraine should have negotiated a peace deal before the war started, since Russia will defeat them.

And by negotiating for peace before war broke out, Ukraine would not have been destroyed, the people would not have been forced to run for their lives to escape the War and Kyiv would have had a stronger negotiation status before the war began. Indeed, when Russia declares victory it will be “winner takes all.”