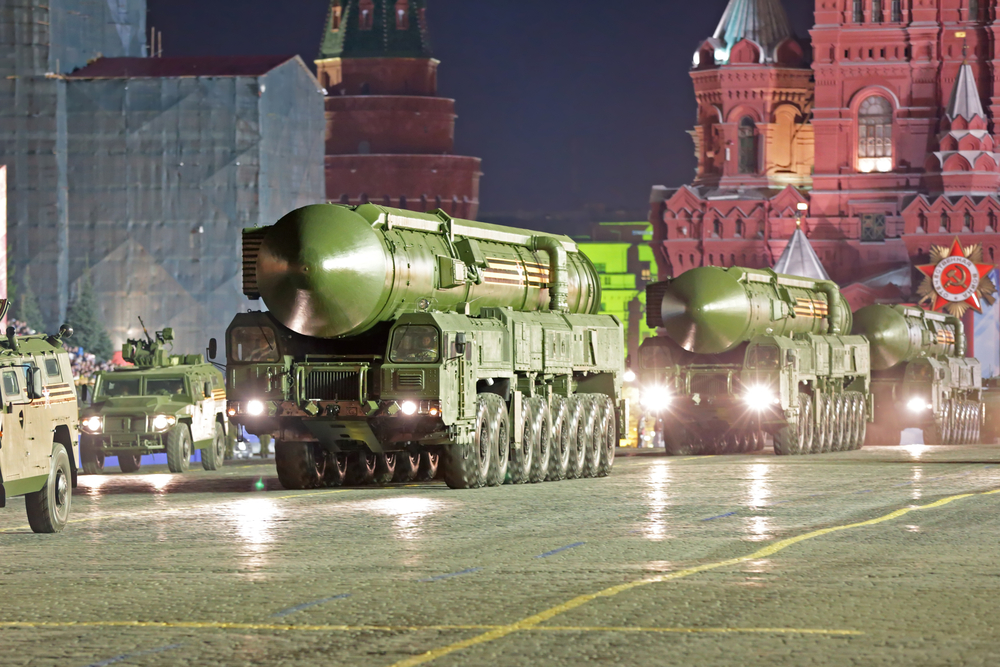 Russian President Vladimir Putin spent his Saturday inside the Kremlin with his Belarusian counterpart, Alexander Lukashenko, overseeing military drills that involved the test-firing of ballistic, cruise, and hypersonic missiles amid increasing tensions with Ukraine and the West.

Prior to the missile test, Putin—once again—blamed Ukraine for its part in “escalating” tensions in the eastern part of the country, which is home to Russian separatists. He denied having any plans for an invasion but said it is impossible not to see “what is happening around the world and around us. But we have clearly defined guidelines in line with the national interests of the Russian people and the Russian state.”

The Wall Street Journal reported that Saturday’s drill served as a “pointed display of its [Russia’s] nuclear and conventional military might amid a standoff with the West over Ukraine.”

Some of the artillery that was fired included the RS-24, a nuclear-capable missile, and the Tsirkon hypersonic missile, which is an anti-ship weapon, according to the paper.

One U.S. official told the paper that Russia is showing its ability to “operate all the way up the escalation ladder.”

“It is intended to send a message to the West that they are prepared, including their senior leadership,” the official said. (See “BIDEN MEETS WITH PUTIN: COLD WAR TO CONTINUE.”)

The U.S. warned that the missile test raises the risk that there is some kind of miscalculation, a charge that Moscow dismissed, saying the exercises were planned in advance, and Russia “without fail,” notified other countries about them.

Dmitry Peskov, a spokesman for Putin, said the exercises should not worry anyone.

From Russian defectors being poisoned in the U.K, to Donald Trump’s Presidential win, to any cyberattack, high crime and misdemeanors—without providing a shred of hard evidence, America’s media and politicians blame it on the Russians. (See “Pure Propaganda”)

And while the western media continues to report on the German horrors of the Holocaust which killed over 6 million Jewish civilians, Adolph Hitler’s “Operation Barbarossa” was launched against the Soviet Union 80 years ago today, costing the lives of some 30 million people on the Eastern Front.

Yet, these Nazi horrors have been brainwashed out of society, masked by the Cold War and the Iron Curtain that separated Eastern Europe and Russia from the west.

Putin met with Biden in person on 22 June 2021.  The meeting was par for the course and they signed a Joint Statement on Strategic Stability.

Following the meeting, Biden’s detractors said little was accomplished for the U.S., while his defenders say that the diplomatic process takes time and will not be solved with just one meeting.

TRENDPOST: President Vladimir Putin referred to a quote attributed to Leo Tolstoy at the summit when he said that in life there is no “solid happiness” only “silent lightnings, a mirage of it on the horizon—cherish those.”

“And it seems to me that in our situation there can be no absolute ‘family trust.’ But I think the silent lightnings of it actually flashed by,” he said.

The Washington Post reported that President Joe Biden said there was no “kumbaya” moment.

It is not surprising that there was no diplomatic win by either leader, but if pressed, many political observers said it seemed Putin carried the day. (Once again he shared the world stage with the U.S. president, which further cemented Russia’s importance.)

The Trends Journal has reported for months about the strained relations between Washington and Moscow, even before Biden was in the White House. (See “PUTIN ACKNOWLEDGES BIDEN’S ANTI-RUSSIAN RHETORIC” and “BIDEN HITS RUSSIA WITH SANCTIONS.”)

Biden has called Putin a killer and stood by his comment before the meeting on Wednesday, and Putin has done little to win over the new administration. Between his aggression in Ukraine, Moscow's decision to leave the Open Skies Arms Control Treaty, and damaging cyberattacks have all hurt the relationship.

An aide for Biden talked to The New York Times shortly after the meeting, and said the president is “perpetually optimistic” that the relationship can turn around.

“He may be the only one,” the aide said.

It was Tolstoy after all who wrote in “Anna Karenina”: “If you look for perfection, you’ll never be content.”

TRENDPOST: What is not being reported in the ongoing Ukraine/Russia/US/NATO conflict, is that a major growing political force in Ukraine are neo Nazi forces.

As reported by Reuters in March 2018 in an article “Ukraine’s neo-Nazi problem,” they note that “As Ukraine’s struggle against Russia and its proxies continues, Kiev must also contend with a growing problem behind the front lines: far-right vigilantes who are willing to use intimidation and even violence to advance their agendas, and who often do so with the tacit approval of law enforcement agencies.”

Others had contended that these neo-Nazi forces were also instrumental in the overthrown of Ukraine’s democratically elected president, Victor Yanukovych back in 2014.

The Reuters article also states, according to Freedom House’s Ukraine project director Matthew Schaaf, “numerous organized radical right-wing groups exist in Ukraine, and while the volunteer battalions may have been officially integrated into state structures, some of them have since spun off political and non-profit structures to implement their vision.”

Schaaf noted that “an increase in patriotic discourse supporting Ukraine in its conflict with Russia has coincided with an apparent increase in both public hate speech, sometimes by public officials and magnified by the media, as well as violence towards vulnerable groups such as the LGBT community,” an observation that is supported by a recent Council of Europe study.”

Yet, these neo-Nazi facts of who is pushing the war with Russia are ignored. However, today, Dr. Paul Craig Roberts, in his article “Breaking news: Russia Has Given Up On Negotiations and Will Resolve the Donbass Issue by Recognizing the Independence of the Republics,” notes that Ukraine President “Zelensky has not been able to function as president, because he is caught between Washington and the CIA controlled neo-Nazi militias and is up for reelection.”