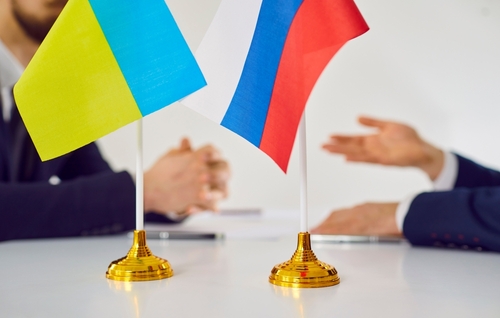 Russian President Vladimir Putin on Saturday held a phone call with German Chancellor Olaf Schulz and French President Emmanuel Macron to discuss the Ukraine War and pinned blame on Kyiv for not seeking a diplomatic resolution to the conflict.

The phone conversation lasted 80 minutes and the Russian leader Putin brought up the West’s “pumping” of arms into Ukraine. Putin said these donations “risk further destabilization of the situation and aggravation of the humanitarian crisis.”

Putin told them that Russia was open to a negotiated peace deal and said Moscow is willing to help tackle the emerging food crisis if Western countries lift “the relevant sanctions.”

The report said there were gains made during the conversation and Putin committed to treating captured Ukrainian combatants “in accordance with international humanitarian law.” He also vowed to allow the International Committee of the Red Cross unrestricted access to the captives.

While Putin talked with the two leaders, Russian forces were continuing their offensive in the Donbas, namely the city of Severodonetsk. Ukraine claims it cannot defend these regions because Russia is attacking these areas with missiles from far away.

President Joe Biden is getting closer to approving a long-range rocket system that has been identified in Russian state-run media as a “red line” that will provoke a “harsh response from Russia,” reports said.

“For our part, we are ready to continue the dialogue. But I will emphasize once again: the ball for the continuation of peace talks is in Ukraine’s court. Freezing the talks is entirely Ukraine's initiative,” Medinsky said.

Zelensky and his close advisers have said that Russian troops need to leave the country, including areas they currently control.

TREND FORECAST: How will Russia fight against the sanctions being imposed upon it and the scores of businesses and financial institutions leaving the nation? Russia has bolstered itself over a long period of time—even prior to the Ukraine War—in preparation for the assault by creating as much of a Self-Sufficient economy as possible, in line with our Top 2022 Trend of self-sufficiency.

TREND FORECAST: The U.S. has little direct reliance on food exports from Russia and Ukraine but still will feel the shortage’s effects as global food costs rise.

We have greatly detailed that as a result of Western sanctions, many poor nations, mostly in Africa and the Middle East, will face severe food shortages by the end of this year. And, the deeper their economies decline, the higher the escalation of one of our Top Trends: The New World Disorder.

Across the globe, there will be massive demonstrations as millions take to the streets to protest the lack of basic living standards, government corruption, crime and violence. And the higher the rate of demonstrations, the greater the number of people will flee their homeland for safe-haven countries.

This, in turn, will dramatically escalate anti-immigration, anti-establishment populist movements in nations where they seek refuge.

TREND FORECAST: Confirming our forecast that we had made, on Sunday Deutsche Welle reported that Notis Mitarachi, Greek’s Minister of Migration and Asylum, told Skai TV that Greece would add another 80 km to its 35 km concrete wall its border with Turkey to prevent refugees from crossing the border.

Therefore, as economies sink deeper into Dragflation and social unrest escalates, so too will the refugee crisis.